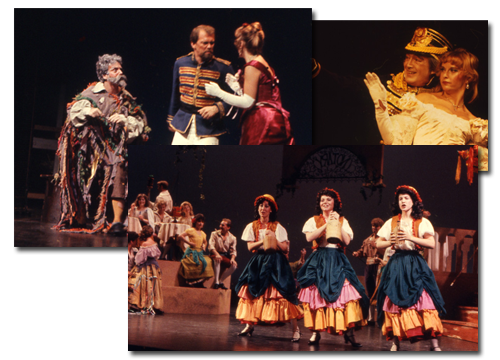 Once the glitter and glitz of opening night and getting the season up on its feet is in the past, Ohio Light Opera settles into the imported, more traditional, part of the season. As it happened, the first four productions were all from the American Lyric Theater.  Now we’ll be treated to Iolanthe, a not-so-well-known Gilbert & Sullivan; La Périchole by the French master, Offenbach, and closing the season will be a Viennese confection by Franz Lehár. Cloclo (an OLO premiere) is a sort of step-sister to The Merry Widow.

Any operetta by Gilbert & Sullivan is full of confusion, disguises, mistaken identities, and so forth, and all set to wonderful music, of course. But Iolanthe seems to go a bit over the top.  In this one, the women are all fairies, or ‘peri’, while the men are all Peers of the Realm, always in full regalia, no matter the setting or purpose. It’s really a dandy battle of the sexes – in disguise. First there was Iolanthe, herself, falling in love with a peer, who turns out to be the Lord High Chancellor.  They have a son, Strephon, who is a fairy above the waist but his legs are mortal.

He is in love with Phyllis, a shepherdess, who gets all bent out of shape when she sees him being consoled by a very attractive female. It’s really his Mom (fairies don’t age very much) but too late now for that. The Lord High Chancellor thought he wanted Phyllis, but changed his mind again once he saw Iolanthe. And so it goes.  However, it all turns out well — he makes a new law that all peers must marry peri thus making them human again.

It’s probably not worth the effort to keep up with all this. Just enjoy the laughs and the sumptuous music, which has been generally noted as Sullivan’s most ambitious and even compared to Wagner at times.

Ted Christopher is both Stage Director and the Lord High Chancellor. Sarah Best is Iolanthe. Conductors are J. Lynn Thompson and Wilson Southerland. Choreographer is Spencer Reese, and costumes are by Stephanie Eubank. The performances run through August 9.

La Périchole is a lesser known work from 1868 by the French master of lighter, sometimes more satirical operettas. But then, he also composed one of the most dramatic, lush, operas of all time, Tales of Hoffman. For this one however, he turned to a more reality-based tale set in Lima, Peru. It concerns a penniless actress, the La Périchole, the title character. When she is offered a court position at the behest of Don Andrès, they both learn that she must be married in order to accept the post. While slightly inebriated, she agrees, and discovers herself wed to a former lover! Hilarity ensues, along with the gorgeous, well-known “Letter Song”.

Long-time aficionados of Ohio Light Opera will be happy to welcome the return of Boyd Mackus as Don Andrès,  and Spiro Matsos as the Marquis de Tarapote, in the same roles they portrayed in OLO’s 1984 production (archive  photos above). That’s a record of which to be very proud.

The new English Translation of the libretto used in this production is by Jacob Allen, a regular director for Ohio Light Opera. The orchestra will be conducted by Wilson Southerland, with Stage Direction by Julie Wright Costa. Périchole opens on July 18 and continues through August 9.

The final production of OLO’s anniversary year is Franz Lehár’s CloClo from 1924. It is also the final OLO premiere of the season. A young woman, CloClo, who is mistress to a wealthy married man, is misidentified by his wife as his ‘natural’ daughter and welcomed into their household. This would be enough confusion for most operettas, but yet another complication occurs when the younger woman’s piano teacher falls head-over-heels for her, and she manages to end up in jail. This situation presents another opportunity for a jailhouse scene, plus a wide variety of musical styles throughout: waltzes, tangos, foxtrots, etc.

Stage Director Steven Daigle also created a new English Translation of the libretto for this production, which will be conducted by Steven Byess. Spencer Reese will no doubt have a field day with the various dance rhythms in his capacity as choreographer. Costumes are by Jennifer Ammons. The show opens on July 25 and runs through August 8.

All productions are at Freedlander Theatre on the campus of The College of Wooster. Call 330-263-2345 or reserve tickets here.

If you’re interested in costumes, the Wayne County Historical Society presents “Ohio Light Opera: A Costume Retrospective,” showcasing four decades of OLO through costume and design. With an admission price of $5 per person, the exhibit is open from noon to 1 pm before every OLO matinee, and during the Society’s regular tour hours, Friday and Saturday from 1:00 pm to 4:00 pm. The Society is located at 546 E. Bowman, just east of Beall Avenue, an easy reach from Freedlander Theatre.

A relatively new tradition at OLO is the Festival Symposium, held from July 31 through August 3. The theme this year is “Taking Light Opera Seriously,” and will feature roundtable discussions, musical presentations, lectures, and a look to OLO’s next forty years. Tickets are available through the box office.

END_OF_DOCUMENT_TOKEN_TO_BE_REPLACED

The strings-only work by Berg has made relatively frequent appearances on the Orchestra’s programs. In 2021, the musicians recorded it for the In Focus series, and it appeared again on last year’s European tour. Friday’s rendition maintained the group’s characteristic light and effortless playing, each section blending as much as possible to echo the work’s original form as a string quartet. At fifteen minutes total, the piece is quite short, but the dense encoded musical meanings require some extra-attentive listening. Splitting up the three movements ensured that each one could be appreciated on its own. END_OF_DOCUMENT_TOKEN_TO_BE_REPLACED