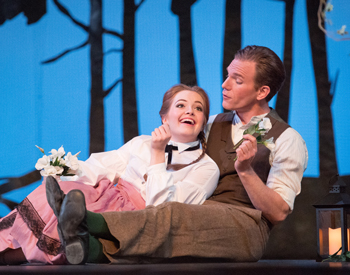 The Dancing Years, an OLO premiere this season, first appeared in the UK in 1939, and ran for 1150 performances, well into the beginning of WWII. Ivor Novello wrote the book and the music, while the lyrics are by Christopher Hassall. Novello was heavily influenced by the approaching war and the situation he had encountered in Vienna shortly before beginning this work.

By the time of its premiere, however, the plot was somewhat subdued, and perhaps overshadowed by the lush music. In brief, it tells the story of Maria and Rudi, who meet in 1911, but are separated. They meet again sixteen years later, but again, they are separated, this time for eleven years. In all honesty, this reviewer was a tad confused by the title, which could easily be misunderstood — it refers to the era in which the majority of the piece is set, not necessarily to the action itself.

Oh, there are some wonderful waltzes (choreographed by Spencer Reese), and the orchestra was its usual, delightful self as conducted by Steven Byess. The gorgeous period costumes were designed by Charlene Gross, while Ken Martin designed the versatile sets, which were brilliantly lit by Brittany Shemuga.

Artistic Director Steven Daigle, who is responsible for the season presentations, was the detective who re-discovered this show, and set out to find enough parts to make it work — he certainly succeeded in his quest. There are two characters — a slightly older man and woman — who wander, silently, in and out of the story, before their purpose becomes clear in the final scenes. At that point, everything that has happened previously begins to make enormous sense, and the final scene is extremely poignant and very powerful. (Everyone was in tears at the first performance — both audience and cast!)

When the curtain rises in 1911, Rudi Kleber (Nathan Brian) is a young composer, perhaps not starving, but behind on his rent, who returns home to find his beloved Steinway in the garden with a “Sold” sign on it. He is informed of this “tragedy” by Hattie (Alexa Devlin), a waitress at the inn. He is slightly comforted by the young daughter of the house, Grete Schone (Emily Hagens), who has a major crush on him. She inveigles a pledge from him that he will grant her the first refusal of any marriage proposals he might make. 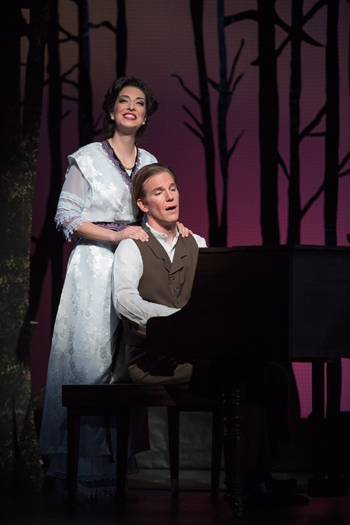 Rudi decides to play his music in the garden, in hopes of finding a buyer. Success! The opera star Maria Ziegler (Sarah Best) purchases the song, and returns a few days later in company with Prince Charles Metterling (Samus Haddad), her current romantic interest. The Prince will let Rudi live in a studio at his Palais. While having a lesson with her teacher Cacille Kurt (Hannah Kurth), she confesses to having fallen in love with the composer. Their duet “The Wings of Sleep” was astonishingly beautiful.

The second act opens in 1914, before moving forward again, briefly, to 1927, and finally to 1938. It is this latter scene when the aforementioned ghostly figures come to life and speak to us and to each other. Here, the mature Maria is Julie Wright Costa, while Rudi is Ted Christopher. They are still very much in love, although Maria had indeed married her prince. She begs for a bit more time before making the life-changing decision that is imperative to their happiness. Previously kept secrets are unveiled, which adds to the suspense.

(Note: two of Mr. Christopher’s children appear in this production. His young son Bryson made his stage debut as Otto at OLO in this work, while daughter Madi in the role of Carl was simply amazing!)

The Dancing Years continues in repertory at OLO through August 11 (but be sure to take your handkerchief, you’ll need it!); Thursday, July 28 matinee; Friday evening, August 4; and Thursday matinee, August 11.

END_OF_DOCUMENT_TOKEN_TO_BE_REPLACED

Supported by engagingly, yet simple staging by Cara Consilvio, a well-prepared cast of singers told the archetypal story of Cinderella with charm and flair. Framing the production was  a sparse but colorful set and wonderful lighting by Dave Brooks. END_OF_DOCUMENT_TOKEN_TO_BE_REPLACED