What sets Music in the Air apart from most operettas that take place in Germany is the touch of screwball comedy that is interwoven with the musical side to produce a vastly different, yet totally enjoyable work of musical theater. It isn’t quite an operetta, nor is it strictly musical theater (imagine if you will, I Love Lucy meets The Merry Widow). It is totally tuneful, just as one would expect from Jerome Kern, and the book and lyrics for this 1932 production were by his frequent collaborator, Oscar Hammerstein II.

Professor Walter Lessing, school music master in the beautiful little town of Edendorf aspires to be a published composer. Early one morning, he hears a bird singing outside his window and promptly dashes to the piano to write down the melody. He shows the music to Karl Reder, the boyfriend of Sieglinde, Lessing’s daughter. Karl produces lovely lyrics, and the decision is made to hike to the office of Lessing’s publisher, Ernst Weber, in Munich. 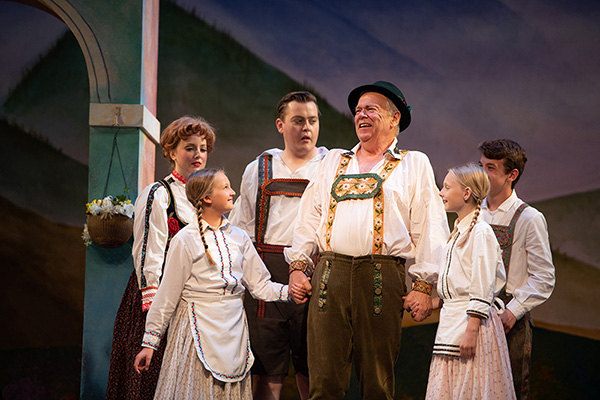 As it happens, the chorus and hiking club of which Karl is a member decide to make the journey with them, and off they go. Of course, there is much singing and appreciation of the gorgeous mountain scenery along the way.

Once there, however, we enter the screwball comedy scenes, all of which are important to advance the entertaining plot line.  Weber is very, very busy, trying out a new song written for the reigning chanteuse of the area, Frieda Hatzfeld, by the star playwright who is also her lover, Bruno Mahler (no relation to Gustav). Weber’s secretary, Marthe, bustles in and around trying to maintain order, but it’s a nearly useless task. 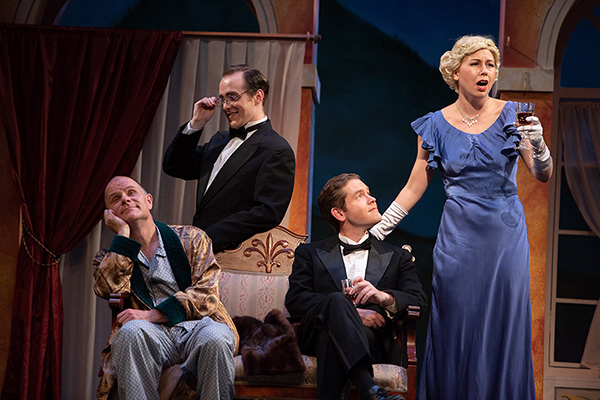 Bruno is very taken with the new young lady from Edendorf, so Frieda turns her charms to Karl. As the new couples pair off, Lessing and Weber finally have a moment to renew their friendship, while remembering their happy earlier years.  In the meantime, Herr Direktor Kirschner, producer of the new work and his wife Lilli, once a performer herself, appear and insert themselves into the action.

Of course, in an operetta, no really good reason is ever required for a change of scene, and here we have a real doozy All of the above personnel go off for the day to the local zoo. Bruno is seriously pursuing Sieglinde, while Frieda is pursuing Karl. Furthermore, Frieda is going to Berlin to appear in a film, leaving Weber and Mahler to pick up the pieces. They propose Sieglinde as the replacement. She does have a lovely voice, but that’s about all she can provide for the demands of a career on the stage. 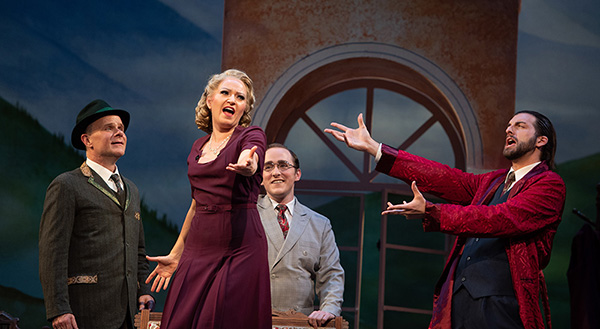 Sadly, as opening night draws ever closer, they must somehow inform Sieglinde that she really does not have the right stuff for the role,  but who will tell her? Eventually, she realizes that she just doesn’t have what it takes, and goes back to Edendorf and Karl. Lilli is coaxed into singing a former big hit about the home town of most of the persons involved: “In Egern on the Tegern See,” which is indeed a beautiful tribute. The two biggest song hits of this show are “I’ve Told Ev’ry Little Star” and “The Song is You.” You will recognize both of them instantly. Promise.

Ted Christopher is a delight as Professor Lessing, even if at times he’s a bit of the absent-minded professor. Sadie Spivey is exactly as you would imagine his daughter Sadie to be, with a gorgeous blonde hair-do complete with braid wrapped around her head. She is a total contrast to the equally blond, but more mature and provocative Frieda of Tanya Roberts. Karl is portrayed by Adam Wells, while Brad Baron effectively chews up the scenery as Bruno. Spencer Reese is not only the choreographer, but also the piano-playing publisher Ernst Weber.  His secretary, Marthe, is the suitably professional Hilary Koolhoven. 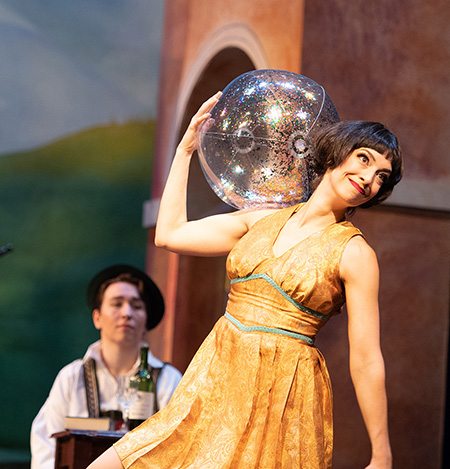 Don’t blink or you’ll miss the best scene-stealer in the business: Sarah Best, the delightfully kooky Hulda, a bubble dancer.  She is responsible for the majority of laughs, although her stage time is rather minimal. Nearly everyone in the company has a named role, and it’s impossible to name them all, but they all acquitted themselves in grand fashion.

Steven Daigle is stage director, while Wilson Southerland conducts the sparkling OLO Orchestra. The versatile and colorful set is by Kiah Kayser, with lighting by Brittany Shemuga, and costumes by Anne Medlock. Sound was designed by Sarah Calvert. 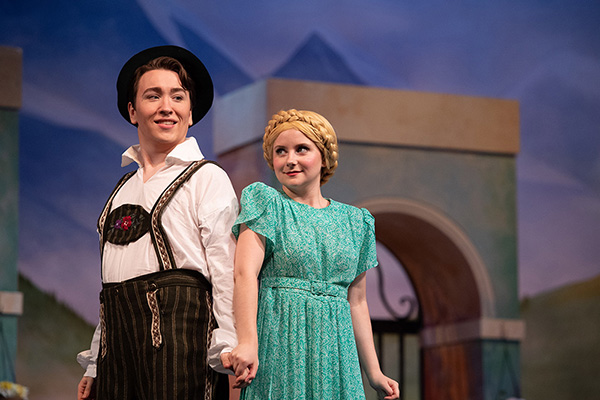 This performance marked the first-ever attempt at supertitles at an Ohio Light Opera production, even though the songs were sung in English. These appeared as thin white type on a darker background, projected on a smallish screen located under the catwalk over the front of the auditorium. They were mostly illegible. Still the effort was a good one, and should not be discarded without further trials.

Music in the Air runs in repertoire through August 8 in Freedlander Theatre on the campus of The College of Wooster. Tickets are available online.