If, like me, you think there can never be too many Viennese-style operettas, you should be pleased with The Devil’s Rider, the latest presentation at Ohio Light Opera. You will also be happy that artistic director Steven Daigle is adept at translating German librettos into English (the original German libretto was by Rudolph Schanzer and Ernst Welisch), so it all makes sense as it proceeds. He has waved his magic wand once again, presenting the 13th OLO premiere of a work by Emmerich Kálmán. This one is also an American premiere.

The music is lush and varied — you’ll hear waltzes, marches, and even Latin rhythms such as tango and rhumba, all of which feeds the creativity of choreographer Spencer Reese. At times, the music seems familiar with its typical Viennese elements. but then it goes off in another direction, while remaining fascinating and enjoyable. Fortunately, the OLO orchestra is immensely capable, and ably conducted by Steven Byess. 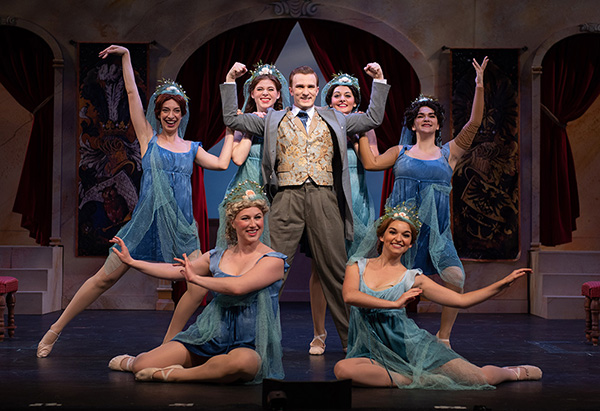 With so many small countries in Europe, it was only natural that there should be constant feuds, even if only imaginary ones. Austria and Hungary had a running squabble that spread over centuries. This tale is set in the early 1800s, (slightly before the advent of Napoleon, who didn’t help this situation at all), when Count Sándor of Hungary (the Devil’s Rider of the title) jumped his mount over a carriage on the street. While in mid-air, he falls in love with Leontine, a beautiful young Austrian princess who was riding in the carriage with the Empress. 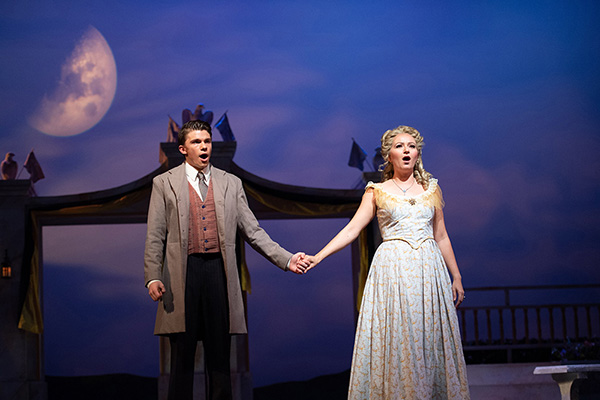 Her father Prince Metternich is not at all happy about this development, having decided she should marry Prince Karl from Monaco. However, the young prince has fallen in love with a ballet dancer, Anina. This quartet of young lovers is fodder for the various roadblocks along the way to love and marriage. 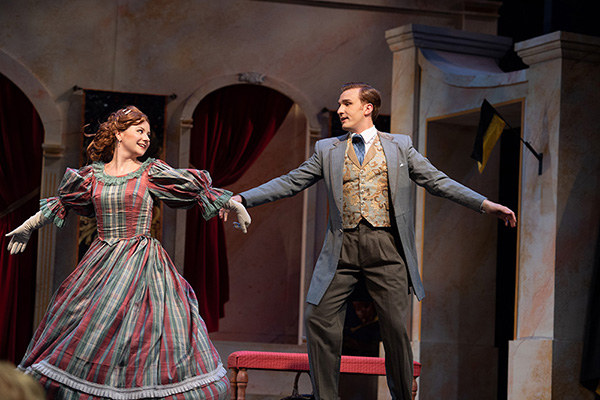 The dashing Count Sándor is played by Benjamin Dutton, who excels in every way and is suitably matched by Tanya Roberts as Leontine. Boyd Mackus is the dignified Prince Metternich, while Yvonne Trobe beautifully portrays the regal Empress of Austria, Carolina Pia. The capable Tim McGowan plays Prince Karl, and Sadie Spivey gives life to his love, Anina. 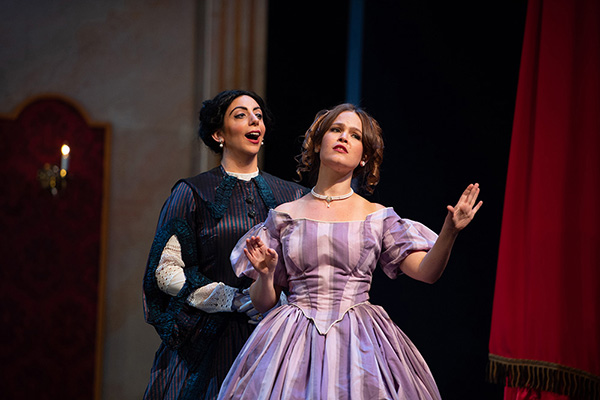 The gorgeous costumes were designed by Jennifer Ammons, and the sets are by Daniel Hobbs, who is also responsible for the very colorful and appropriate illustrations used by OLO for their posters and program books this season. Lighting is by Brittany Shemuga with sound by Sarah Calvert.

The Devil’s Rider runs in repertoire through August 8 at in Freedlander Theatre on the campus of The College of Wooster. Tickets are available online.

The cimbalom was the feature of the show, an instrument capable of taking on many personas. Its performer, Chester Englander, has shaped his career around the instrument, and has inspired composers to write more repertoire for it, some of which was presented on the program. END_OF_DOCUMENT_TOKEN_TO_BE_REPLACED

You wouldn’t expect that acoustic from a glance at the nave, which is wide and long, but not especially lofty. But when I guest conducted a local amateur choir and professional orchestra in Beethoven’s Mass in C there a few years back, during the first rehearsal we released the final chord of the “Gloria” and listened in astonishment for the next several seconds. The sound continued to roll down the space like the big wave that surfers dream about. END_OF_DOCUMENT_TOKEN_TO_BE_REPLACED