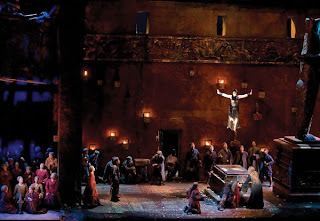 Today we went to the cineplex to watch the latest Met HD Live broadcast: there are five more this spring! Thank you, Peter Gelb! This one was Susan Graham and Placido Domingo in Gluck’s amazing opera, Iphigénie en Tauride, or Iphigenia in the land of the Scythians (my translation). Graham and Domingo both had colds — they called it a NYC epidemic — but they sounded pretty darn good.

For me, coincidentally, this opera, which Gluck adapted from a little-known Greek tragedy by Euripides, came on the heels of four wonderful lectures at Oberlin by Toronto classicist Victoria Wohl, about how strange Euripides’ plays are, and how that strangeness can clue us into their political and ideological messages.

This is a strange opera, to be sure. And I’d love to know what its messages about friendship, sibling love, revenge, and barbarianism might have meant in the court of Marie Antoinette.

Whatever it meant there, it was not sung in a hall like the Metropolitan Opera at Lincoln Center. And that aspect of scale must have been part of what it meant.

In the Met, the singers’ voices have to be BIG. In the HD simulcasts, you get to meet the singers backstage. Here were Graham and Domingo, both obviously struggling with colds, talking to us and host Natalie Dessay, perky as always. Domingo almost sadly gestured to the microphone he was holding for the interview, and commented “we don’t get to use these onstage.”

Well, that’s probably just as well, or La Bohème would end up sounding like Rent (the two are in repertory here in Northeast Ohio, at Baldwin Wallace, the Puccini acoustic, and the other amplified: here’s a review from ClevelandClassical.com: if you’re in NE Ohio, check this out!).

So, if I’ve managed a ticket to the Met (never mind getting to NYC), and say I’m in the nosebleed seats, then I’m going to really want the stars to be in full voice. (Amazingly, they were!) I need to hear them in the back of the hall.

But that’s, strangely, not where I was today. I was in the very front of the hall, and for only $20 (senior rate at my cineplex) to be in the front at the Met… well, “priceless,” as the ad has it).

So what I saw, and more important, what I heard, was close-up and personal. That was great (except when some cranking big camera came down in the frame and I thought it was some weird mythological harpy descending on the poor protagonists). It was great: I see all their expressions as I could never afford to at the Met; I hear the subtleties of their voice; I even see Susan Graham desperately hyperventilating between strophes to get some oxygen in her blood.

But it was not Gluck.

He wrote for a court audience. I don’t know how many would have attended a performance, but I’ll bet it was in the hundreds, not the thousands. It was, oh dreaded word, an elite audience. I don’t want to return to that hyper-precious elitism; Marie Antoinette, his patron, was about to suffer the fate of Hosni Mubarak, after all.

But: what about the music? With all the best intentions and artistry, these singers sang too loud, too forcefully; the Met orchestra was reduced, but not enough to let them move down into the middle range; all was over-blown. It had to be, because they were singing in the Met, and their voices had to reach every one of its 3,800 seats. That cavernous auditorium responds to force, not subtlety.

I first heard Gluck (the great Orfeo ed Euridice) in the tiny Asolo theater in Sarasota, Florida. Ringling, who knew really well what made a great show, had bought this 18th-century opera house and moved it to Florida. It seats 265 people. Now that was a place to experience those delicate and passionate (but not Wagnerian-scale) sounds of Gluck’s then-radical acoustics! It’s probably about the size of the stage at the Met.

I have complained before about the size of venues like that used by Opera Cleveland: otherwise fine productions are lost in the vast Palace Theater (seats 2714 and puts many of them under a voice-sucking balcony). Opera Cleveland has now gone dark for a year for restructuring, caught in the opera-bind: get a big hall in order to get a lot of ticket revenue; play to empty seats because the patrons can’t hear the opera the way they want to).

These are the extremes: too large for nuance, too small for power. Where do we find the happy medium, acoustically? economically? 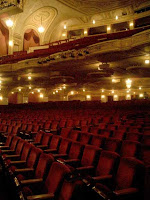 Though I am delighted at having the HD series bring me these performances, in the suburbs of Cleveland, for $20 a pop, they are not the answer, either. I get the experience of an intimate theater, more close-ups than Marie Antoinette would have had at Versailles in 1779. And I get the full sound, probably more balanced and full than for anybody in the actual Met audience (the microphones, of course, are hung in no-man’s-land, high above the actual patron’s seats). But I can’t really put it together because the singers have to sing at full voice.

It’s a constant disjunct, so constant that as with lots of stage conventions, I stop thinking about it. But it’s there, deep in the experience: I seem to be a few feet from these singers; they share their most intimate expressions with me; and yet they are singing their parts at such a volume that, if I were actually there, my ears would be blasted away.

I’m interested in looking again at (listening to, that is) film productions of opera — real movies, not just recorded stage performances — to hear how they manage the acoustics: Jean-Pierre Ponnelle’s Cosi, for example, or the great Ingmar Bergman Magic Flute.  More about this anon!

Nicholas Jones is an English professor at Oberlin College and a correspondent for ClevelandClassical.com. This is a cross-post with the author’s permission from his blog.

Bianca Ciubancan (16, Chicago, Ill) began the afternoon session with Jessie Montgomery’s Rhapsody No. 1 for solo violin. Playing with a warm, rich sound, Ciubancan brought a thoughtful, intimate approach to the work, highlighting each of its distinct episodes. END_OF_DOCUMENT_TOKEN_TO_BE_REPLACED

END_OF_DOCUMENT_TOKEN_TO_BE_REPLACED

Franz Schmidt’s Symphony No. 4 showcased the ensemble, under guest conductor Jonathan Berman, in the standard conventions of a not-so-standard piece. But at the start of the program, the musicians were equal partners to pianist Cédric Tiberghien, whose playing could be as bold as the full orchestra or as intimate as any instrumental solo. END_OF_DOCUMENT_TOKEN_TO_BE_REPLACED