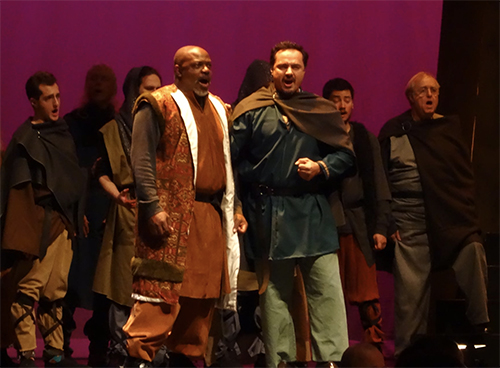 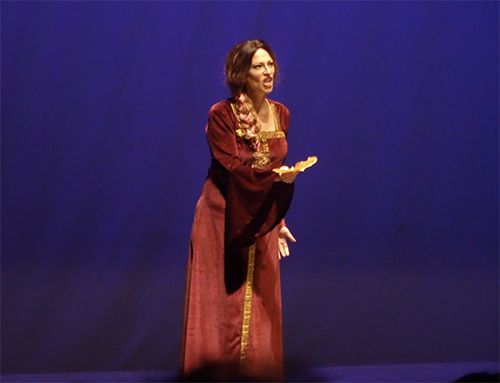 As Lady Macbeth, soprano Diana Farrell shone in the opera’s most challenging role. Whether in recitative, aria, or ensemble, she consistently sang with beauty and sensitivity. Her first entry in Scene 2 began with an emotional recitative, soon followed by an aria replete with virtuosic coloratura. She and Young paired well in their duet. 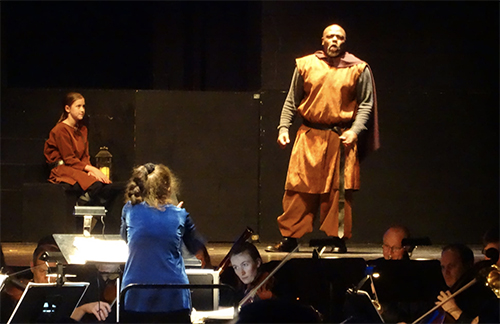 Later in the scene, tenor Jesus Daniel Hernandez (Macduff) entered and sang about his dismay at King Duncan’s murder. He showed amazing vocal quality in a powerful duet ensemble with Stuckey and the supporting chorus. The entire segment was gorgeous  — much of it a cappella with eerie timpani accompaniment. The rendition brought Verdi’s wonderful music to life.

Tenor Dean La Salandra, as Seyton (Macbeth’s steward), distinguished himself in Scene 4 with a wonderful sound. In Scene 5, Farrell and Young led an intense choral ensemble. At first they celebrated Macbeth’s coronation, and later experienced his deterioration with guilt-ridden visions of demons. 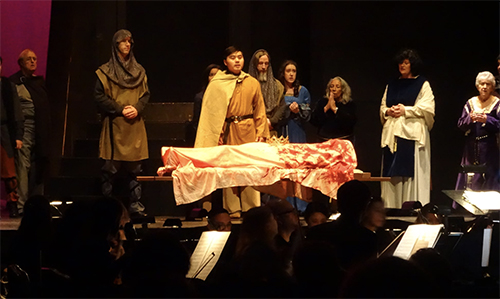 Macbeth, in his descent to madness, succumbed to further visions — particularly that of Banquo, and his heirs destined to rule Scotland. Brass and punctuating percussion supported the events. Young and Farrell closed the scene with passionate intensity. 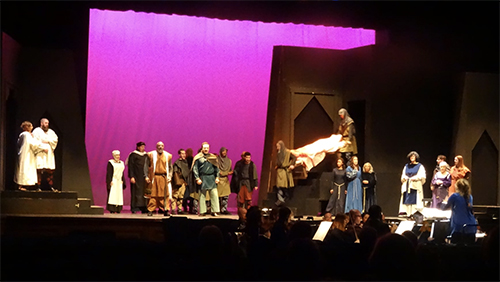 In Scene 2, Hernandez eloquently presented Macduff’s lamentations at the loss of his wife and children. The prelude to Scene 3 was gorgeous, with especially beautiful solos by flute, clarinet, and oboe. Farrell’s depiction of Lady Macbeth’s madness was remarkably effective, especially in her potent low register.

In Scene 4, Hernandez’ strong voice was particularly striking when he proclaimed Malcolm the new king. Overall, the production did justice to Verdi’s sensitive depiction of the tragic main characters.