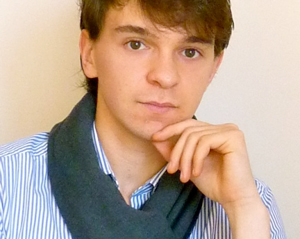 French organist Emmanuel Arakélian made his local debut on Sunday afternoon, February 19 at the Cleveland Museum of Art’s Gartner Auditorium. The Avignon native, born in 1991, is currently studying organ with Olivier Latry and Michel Bouvard at the Paris Conservatory. His Cleveland program featured an intriguing mix of well-known standards and transcriptions, as well as a new work by the young French composer Grégoire Rolland.

Each of the three movements of J.S. Bach’s Toccata, adagio and fugue in C features its own character — the Toccata with its rhapsodic keyboard flourishes, extended virtuoso pedal solo, and central contrapuntal section; the Adagio, an aria with a highly ornamented melody; and the jig-like Fugue, which dances itself to an unexpected conclusion. Arakélian played with brisk tempi and generous, imaginative articulation, generating excitement throughout. At first he seemed a little uncomfortable with the Holtkamp organ, sometimes not holding keys long enough for the notes to sound. As the recital progressed, he played with greater assurance.

Arakélian followed the acrobatics of Bach’s original works with his own straightforward transcription of the opening aria of Bach’s solo cantata No. 170, Vergnügte Ruh, beliebte Seelenlust. The organist made the original alto aria sound natural as an organ chorale prelude. The melody appeared with two contrasting registrations and an accompaniment of “walking” chords.

Grégoire Rolland’s Omoï (“Memory”) is richly fascinating and deserves to be heard again. The work is an homage to those killed in the Japanese earthquake and tsunami on March 11, 2011. It begins with repeated clusters, interrupted by heavy low pedal sounds combined with high pitches. A sinuous melody on the organ’s buzzy Cromorne stop is based on a Japanese tune. The extended tonality of the music is reflective, even with significant dissonances. Arakélian’s registrations were imaginative and mysterious, and the organist had its numerous technical challenges well under control.

The recital closed with two masterpieces from early 20th-century France: Jehan Alain’s Fantaisie No. 2 and Maurice Duruflé’s Prelude and Fugue on the name ALAIN, in which the letters of Alain’s name are assigned to notes to create the musical theme. Duruflé also interpolates the theme from Alain’s Litanies as part of the Prelude. The strictly constructed fugue is a virtuoso showpiece.

Alain’s fantasy is less rigorously structured, with an opening theme which develops to a major climax, then descends to a quiet, melancholy conclusion. Alain’s harmonies are modal and his registrations quirky. Emmanuel Arakélian gave both pieces fine performances, displaying sure technique, dramatic flair, steady rhythm, and flexibility of musical line.

Jackson began the program with a recitation of Langston Hughes’ poem “Helen Keller” — the first of five poems by Hughes that served as interludes between each piece on the first half. END_OF_DOCUMENT_TOKEN_TO_BE_REPLACED

Pianos with pins and tape on strings, a bass drum and tam tam, crotales, Almglocken, and vibes. Microphones were hooked up all around the instruments. The feed was sent to speakers around the room. Lighting designer Nicholas Houfek hung incandescent globes over the arrangement of instruments from thin black wires stretching across the beams. END_OF_DOCUMENT_TOKEN_TO_BE_REPLACED

From the podium, Elim Chan set an ambitious tone for the evening. The rising star conductor, here in her Cleveland Orchestra debut, has a commanding style, and every twist and turn in Saturday’s performance tracked closely with her baton. END_OF_DOCUMENT_TOKEN_TO_BE_REPLACED