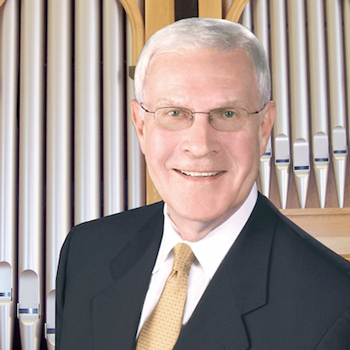 Legendary American organist Frederick Swann — famous for his many years as organist at the Riverside Church in New York and the Crystal Cathedral in California, and for his countless recitals around the world — gave his next-to-last recital, ever, at Fairmount Presbyterian Church in Cleveland Heights on Sunday afternoon. Co-sponsored by the Cleveland Chapter of the American Guild of Organists, the concert drew a large audience to celebrate Swann’s impending retirement at the age of 85. Making the recital even more nostalgic was the fact that Swann played one of the first recitals on the church’s Schantz organ during its 1996 inaugural year.

The program had something for everyone: monumental works by J.S. Bach, César Franck, and Healey Willan were interspersed with charming, shorter 20th-century works by Americans Seth Bingham, John Weaver, and John LaMontaine, and German composer Ernst Pepping.

Swann opened his program with Bingham’s Bells of Riverside, a tribute to the carillon at Riverside Church, whose hourly ring is based on a theme from Wagner’s Parsifal. Swann played the theme on the chimes, followed by the massive chords of the full-organ introduction. The theme develops into bell-like motifs using a well-wrought, tonal idiom.

Franck’s Trois Chorals were the last major works he completed before his death in 1890. No. 2 in b-minor is a series of variations above a recurring bass line, with a second theme in a chorale style. The organist showed a fine sense of phrasing and flexibility of pulse, connecting musical lines with a smooth legato. A large video screen at the front of the church made it possible to observe Swann’s restrained and efficient technique.

A forgotten gem from the middle of the last century, LaMontaine’s Evensong is worthy of revival. A soaring melody on a solo flute stop is accompanied by soft strings. A middle section of greater harmonic complexity then resolves to a return of the original tune. It was a perfect palate cleanser before the Bach that followed.

The Prelude and Fugue in E-flat are the opening and closing movements of Bach’s Clavierübung, Part III, a compendium of large and small hymn settings representing the sections of the Lutheran Mass and the catechism. Arguably Bach’s greatest organ work, it’s one of the few that were published during the composer’s lifetime.

The Prelude and Fugue, often played together in concert, provide many technical and musical challenges for the performer. At this stage in his career, Swann no longer enjoys the complete security of technique he once had. A number of slips were balanced by his strong musicality. He played with a strong rhythmic pulse and sparse but tasteful ornamentation. Swann started the first section of the fugue at a very fast tempo, but sustained it through to the end.

Swann’s playing got stronger as the concert progressed. Weaver’s Introduction and Fugue on St. Denio is based on a Welsh hymn tune. In the fragmentary introduction, pieces of the tune appear among fanciful keyboard figurations. The vigorous and complex fugue is thrilling, the tune fleshed out by more melodic material. Swann built it to a climax on full organ with fanfares on the Trompette en Chamade — one of several instances in the concert when the sound was simply too loud for the size of the room.

Pepping’s chorale preludes present hymn tunes in refreshing harmonic settings. The two that Frederick Swann played (“Up, up, my heart with gladness” and “With tender joy”) aren’t more than a couple of pages long, but each poses a bit of technical trickiness amid the musical simplicity. They were a winning break from the larger works.

The concert closed with Willan’s great Introduction, Passacaglia, and Fugue. Though the sound was once again overwhelming at the end, Swann’s was a magisterial performance, the capstone of his many decades of concertizing. Exploiting the many resources of the organ and playing with constant forward motion, Swann carefully controlled every moment of the twenty-minute work.

Frederick Swann’s final concert is scheduled for November 10 in Kilgore, Texas, celebrating the anniversary of an organ that he dedicated 50 years ago — to the day and hour. After the ovation on Sunday, the organist said a few words of farewell to Cleveland, finishing with a delightful encore that he described as “a miniature Allegro by the performer, with apologies to Corelli.”

Franz Schmidt’s Symphony No. 4 showcased the ensemble, under guest conductor Jonathan Berman, in the standard conventions of a not-so-standard piece. But at the start of the program, the musicians were equal partners to pianist Cédric Tiberghien, whose playing could be as bold as the full orchestra or as intimate as any instrumental solo. END_OF_DOCUMENT_TOKEN_TO_BE_REPLACED

END_OF_DOCUMENT_TOKEN_TO_BE_REPLACED

Jackson began the program with a recitation of Langston Hughes’ poem “Helen Keller” — the first of five poems by Hughes that served as interludes between each piece on the first half. END_OF_DOCUMENT_TOKEN_TO_BE_REPLACED

Pianos with pins and tape on strings, a bass drum and tam tam, crotales, Almglocken, and vibes. Microphones were hooked up all around the instruments. The feed was sent to speakers around the room. Lighting designer Nicholas Houfek hung incandescent globes over the arrangement of instruments from thin black wires stretching across the beams. END_OF_DOCUMENT_TOKEN_TO_BE_REPLACED

From the podium, Elim Chan set an ambitious tone for the evening. The rising star conductor, here in her Cleveland Orchestra debut, has a commanding style, and every twist and turn in Saturday’s performance tracked closely with her baton. END_OF_DOCUMENT_TOKEN_TO_BE_REPLACED