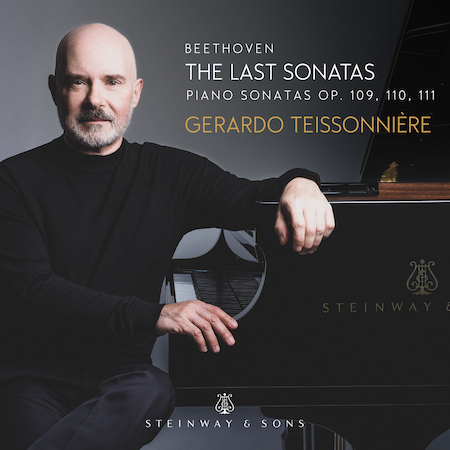 In many ways the current state of world affairs is strikingly similar to those Beethoven was experiencing as he entered his Late Period, which coincided with the defeat of Napoleon, the reinstatement of the monarchy, and economic depression.

In spite of this, as pianist Gerardo Teissonnière writes in the liner notes of his recent recording Beethoven The Last Sonatas, “These three extraordinarily diverse works present us with some of the composer’s most beautiful, innermost, surprising, and transcendental musical expressions.”

If you were thinking that perhaps the world doesn’t need another recording of Op. 109, 110, and 111, think again. During the 69 minutes of the album, released on the Steinway label, Teissonnière brings a crystalline sound, formidable technique, and exquisite musical taste to his interpretations.

The first thing that piques the ear during Sonata No. 30 in E is that Teissonnière allows the musical lines to breathe. This trait provides a welcome relief from the all-too-common caffeine-induced performances of the work by less experienced players.

The pianist also doesn’t try to smooth over Beethoven’s often jagged lines, but rather he embraces those idiosyncrasies. This approach serves him well during the sonata’s brief second movement, Prestissimo. In the statement of the third-movement theme, the pianist’s articulations are superb — the simple line always moving forward. And during the variations, Teissonnière simply lets the story unfold without fuss. He doesn’t try to wow you with his immense technique. Instead, he entices you with his thoughtful attention to the score.

In the opening of Sonata No. 31 in A-Flat, the technical right-hand passages over steady left-hand chords are truly classy, and in the recurring theme the pianist takes time at all of the right moments. The coda sparkles, and the final two chords are beautifully voiced.

Lasting only two-plus minutes, the second movement is a fun romp. In the third the pianist examines Beethoven’s innermost thoughts until the big fugue arrives. Here the composer’s numerous moods come to the fore, and Teissonnière is more than happy to explore them.

In his liner notes, the pianist describes these last sonatas as a “triptych that extends the limits of musical and pianistic convention and imagination, introducing new technical and tonal elements to the instrument for which they were written and changing the traditional boundaries of the classical sonata form for future generations of composers.”

While this observation certainly applies to all three works, these sentiments are fully realized in Sonata No. 32 in c. Consisting of two contrasting movements, the sonata takes a circuitous and at times ambiguous path that Teissonnière seems to enjoy.

In the second movement, “Arietta and five variations,” he has no problems playing to 21st-century ears. For example, in the third variation, he relishes the swinging melodic line that foreshadows ragtime by over 70 years.

Throughout the movement the pianist encourages listeners to stop over-analyzing and simply enjoy the genius of Beethoven’s music, which he has brilliantly unscrambled and plays with a self-possessed flair. The twinkling trills near the end beckon the skies to open as Teissonnière brings the sonata to conclusion with a single, beautifully balanced chord. There’s nothing more to say.