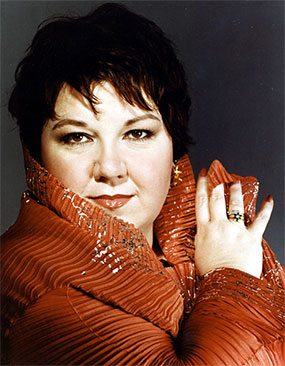 Wesendonck Lieder are beautiful and I just love to sing these songs any chance I get,” exclaims renowned dramatic soprano Jane Eaglen. “I learned them with my teacher when I first went to college at eighteen, and I have performed them many, many times, and every time I do I find something new and different about them.” On Saturday, March 2 beginning at 7:30 pm in Plymouth Church, Jane Eaglen will perform Wagner’s Wesendonck Lieder with Blue Water Chamber Orchestra under the direction of Carlton Woods. The concert, titled Jane & Ludwig, also includes Beethoven’s Egmont Overture and Symphony No. 8.

The five songs that comprise the Wesendonck Lieder, Der Engel (The Angel), Stehe still! (Stand still!), Im Treibhaus (In the Greenhouse), Schmerzen (Sorrows) and Träume (Dreams) were composed while Wagner was working on his opera Tristan und Isolde. “Of course he was trying things out for Tristan when he was writing them, so I suppose it was a bit of writing the songs before the opera.” In fact Wagner sub-titled two of the songs Träume and Treibhaus, as studies for Tristan und Isolde.

The songs are settings of poems by Mathilde Wesendonck, the wife of one of Wagner’s patrons with whom it is rumored that the composer was having an affair. “I think it’s pretty well agreed upon that they were not [having an affair],” says Eaglen. “But they clearly had a very deep mental liaison-type of relationship.”

Eaglen, who has enjoyed a long career singing Wagner roles in the world’s major opera houses, says that even at the age of eighteen her teacher predicted that she would end up singing Wagner one day. “I think he heard something that sounded like a boy soprano voice that eventually would go there. Of course it’s very much about whether or not a voice develops to be able to sing that music because it needs a certain color and a certain timbre.”

Eaglen speaks very fondly of her teacher at the Royal Northern College of Music, Joseph Ward. “He first heard me sing when I was seventeen and he’s still my teacher. I think it’s pretty unique for someone to have a big career who only had one teacher. But he’s so amazing and there was never a time when I wasn’t learning something from him and to this day I still continue to do so. I’m happy to have had that luxury.”

But would she recommend studying with only one person to her own students? “It depends a lot on the singer. Sometimes you get along fine and it has nothing to do with what you think of the person. It’s just that you’re not on the same wave length and they might benefit from working with someone else. And sometimes singers just want to go and work with someone else, which is fine.” Eaglen goes on to say, “My teacher said that if I wanted to go and work with someone else he would have no problem. But I was always learning something from him and I never wanted to go. But I too have no problem when my students feel that they would just like to go and see what someone else has to say.”

Eaglen believes that because a voice is so much a part of who you are, a voice teacher needs to understand the student really well. “It’s a vulnerable thing to do sometimes, and I always say that at least once a semester you become a therapist rather then a voice teacher. You do have to understand certain things about people in order to keep working on the voice.”

She also thinks that it’s important to explain to young singers how to work the business side of things, such as finding an agent. “That is something I try to give to all of my students: the experiences that I’ve had and they’re not just vocal. When you’ve been in this business for a long time you learn certain things that I think is important to pass on.”

In the fall, Eaglen will leave her current teaching post at Baldwin Wallace University Conservatory of Music to take a position at the New England Conservatory. “I’m sorry to be going in many ways. My husband and I love living in Ohio and teaching at Baldwin Wallace is really a joy. I have great students and I love the place. But it is a good opportunity to go to NEC. I’ll get to work with older students too, which is quite an exciting thought to me — working with grad students and beyond that even a little bit.”

END_OF_DOCUMENT_TOKEN_TO_BE_REPLACED

Rodgers & Hammerstein’s Cinderella was originally produced for television in 1957 — seven years after the animated Disney film was released — and starred Julie Andrews. According to the Rodgers & Hammerstein website, it was viewed by over 100 million people. END_OF_DOCUMENT_TOKEN_TO_BE_REPLACED

The story line has its origin in an 1855 play and an 1842 farce that Thornton Wilder mined for his 1938 play The Merchant of Yonkers. When that turned out to be a flop, in 1954 Wilder made the crucial decision to re-center the show around the character of the legendary marriage broker Dolly Gallagher Levi and renamed it The Matchmaker. END_OF_DOCUMENT_TOKEN_TO_BE_REPLACED

The Dodero Center for the Performing Arts at the Gilmore Academy in Gates Mills is one feature of an impressive campus. The auditorium is shallow, the stage is deep, and the ensemble played without a shell. Throughout the program, the sound, especially in instruments’ lower registers, tended to disappear. END_OF_DOCUMENT_TOKEN_TO_BE_REPLACED