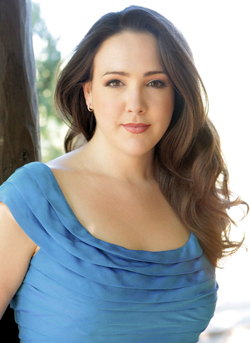 Though Phillips is an international opera star, her feet are planted firmly on the ground, and she maintains a close relationship with Huntsville, the Alabama town where she grew up. When she made her Metropolitan Opera debut in La bohème in 2008, four hundred and fifty local fans flew up to New York to hear her sing. “It’s very rewarding to have the community rally behind you — and they keep showing up and sending me emails and notes,” she said.

Phillips’s parallel interests in opera and vocal chamber music led her to launch Twickenham Fest, a three-day summer chamber music festival in Huntsville which has just completed its fourth season. “I started it with a bassoonist friend who is now principal in Rochester,” she said. “Huntsville is a remarkable community filled with very smart people — it’s hard to find a parking place near the public library — but at the same time, it’s a very warm southern town. We wanted to invite friends we had met elsewhere to come down and play for that community. We try to keep the concerts free to the public and the programming accessible but not dumbed down, and we commission new pieces.”

Susanna Phillips’s interest in chamber music also led to the concert the Chamber Music Society audience will hear on October 15, when Phillips will join pianist Anne-Marie McDermott and violist Paul Neubauer in an intimate program of songs with piano and viola obbligato ranging from “It’s a Long Way from Tipperary” to art songs by Schumann and Rachmaninoff.

It all started with Paul Neubauer. “Paul was running a festival in Oklahoma and needed a soprano. I snapped at the chance. There’s not a lot of opportunity to do vocal chamber music and I almost always say yes!” Phillips said. “I met Anne-Marie and several other musicians there and we decided to play around with some songs, which Paul loves — he’s a very vocal player himself and he has a collection of hundreds of them. So we found a few we wanted to do together.”

Eventually a varied program emerged that engages all the musicians in different combinations. “I love the first group of pieces — they’re such fun,” Phillips says of three English salon songs from the early 1900’s, “and we’ll follow Schumann’s Widmung with Liszt’s piano arrangement.” Neubauer will play Schumann’s Märchenbilder and after a Russian set, the program will end with Italian salon music, “the songs that tenors and violinists used to do together — that brings out the old crying tenor in me,” Phillips said.

Susanna Phillips will return to the Met this season to sing Rosalinda in Fledermaus and Musetta in La bohème, and will play Ellen Orford in Britten’s Peter Grimes both in St. Louis and New York. She’ll also make a series of solo appearances with orchestras. Seeded among those big assignments are more chamber music appearances. The soprano acknowledges that those two sides of her musical life are very different in scale and approach. “At the Met you have costumes, wigs and makeup and you play one character all night. With chamber music, you have to change your characterizations more often and listen much more closely. And it’s much quieter! In rehearsals, Paul sometimes has to tell me, ‘OK, Susanna, tone it down.’”

You also get to see the people you’re singing to. “There are so many bright lights at the Met that you don’t see faces. But in concerts you can see if somebody’s falling asleep or has a great big grimace on their face!” Or more likely, a great big smile.