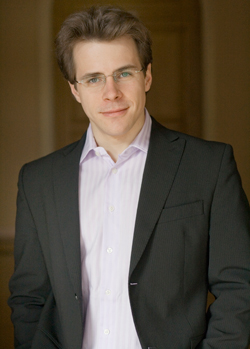 This weekend, Czech conductor Jakub Hrůša returns to Northeast Ohio to lead The Cleveland Orchestra at Severance Hall and Akron’s E.J. Thomas Hall in performances featuring the music of Haydn, Dvořák, and Janáček.

Although the program was to have included Dvořák’s violin concerto, yesterday the orchestra announced: “With deep regret, and on the advice of his physician, William Preucil is unable to perform as soloist this week with the Orchestra due to a pinched nerve.”

“I will miss Bill because I was looking forward to working with him immensely,” Jakub Hrůša told us this afternoon by telephone. “But the most important thing is for him to recover.”

Dvořák’s violin concerto has now been replaced with the composer’s symphonic poem The Golden Spinning Wheel. “I think it was a most natural decision, apart from replacing the soloist — which nobody wanted, me included.” Hrůša does think it was a very good idea to replace the concerto with one of the composer’s orchestral works. “Dvořák wrote four poems that are well known in Europe but not so much abroad, and one of those is The Golden Spinning Wheel. I think his symphonic poems are a wonderful contribution to the symphonic repertoire yet they are in the shadows of his symphonies, concertos and maybe even his Slavonic Dances. And Dvořák was very proud of them.”

The centerpiece of this weekend’s concerts is Janáček’s Taras Bulba, a work Hrůša is very fond of. “I think it’s the originality of language and the strength of the [story] behind the piece which makes it wonderful even if you don’t know anything about its content.” He said he tried to explain the story during rehearsal this morning but found it quite difficult. “I tried to verbalize it and it isn’t easy. [The piece] has very clear programmatic content. It has a plot but at the same time the impact of the music is not dependent on the plot. So knowing the story is almost like an added value.”

Janáček composed Taras Bulba between 1915 and 1918, at a time when the composer was sympathetic with anything Slavic. “He was Slavic himself, of course, and he was a great fan of Russian, or in this case Ukrainian, culture. So he took this famous story by Nikolai Gogol and composed a rhapsody based loosely on it.” Hrůša added that Janáček chose the most “distinguished” yet at the same time “brutal” part of the story to set to music. “The Rhapsody is in three movements and each one is [consumed] by death in a certain way: The Death of Andrei; The Death of Ostap; and The Prophecy and Death of Taras Bulba. They are all a colorful depiction of conflicts between love, war, nationalism and human feelings. It finishes with an incredible pro-Slavic prophecy, and that has to be one of the most beautiful, lyric and passionate episodes in all of twentieth-century music.”

Again Hrůša points out that he does not think you need to know all of this in order to enjoy it. “I think these days the meaning of the nationalism is no longer as important as it was to Janáček. But compositionally it is a masterpiece which deserves to be performed quite often. And I try to suggest it any time that I can because I really believe in it.”

And what about Haydn’s Symphony No. 60 “Il Distratto”? “This is probably the funniest of all of his symphonies. It’s full of jokes and ironic metaphors.” The piece is unusual in there are six movements instead of the usual four. “Originally it was not a symphony but was intended to be incidental music. But Haydn liked the music and wanted to present it as a concert piece. I don’t want to say too much in advance about all of the jokes but it is really one of the merriest of all orchestral pieces that you will find in the literature. It’s also a good balance to the rest of the program.”

The cimbalom was the feature of the show, an instrument capable of taking on many personas. Its performer, Chester Englander, has shaped his career around the instrument, and has inspired composers to write more repertoire for it, some of which was presented on the program. END_OF_DOCUMENT_TOKEN_TO_BE_REPLACED

You wouldn’t expect that acoustic from a glance at the nave, which is wide and long, but not especially lofty. But when I guest conducted a local amateur choir and professional orchestra in Beethoven’s Mass in C there a few years back, during the first rehearsal we released the final chord of the “Gloria” and listened in astonishment for the next several seconds. The sound continued to roll down the space like the big wave that surfers dream about. END_OF_DOCUMENT_TOKEN_TO_BE_REPLACED