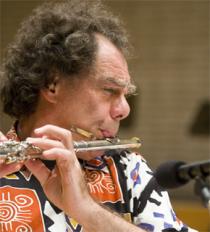 Dick attributes the demise of active listening to changes in education. “In the 1970s, music was stripped out of the public school curriculum all over the country, which is probably the single root cause of why things are the way they are today.”

After playing in the Brooklyn Philharmonic, an orchestra “which imploded and almost died and has now been reincarnated as a small, flexible chamber ensemble,” Dick struck out on his own path as a solo flutist specializing in contemporary music — with an emphasis on his own compositions, which are frequently inspired by popular music. “These days a career in music is a big do-it-yourself kit. People who can be entrepreneurial can stay in the air, but it’s really challenging, and you can spend a lot of time on business.”

Dick’s entrepreneurial activities include having invented a new gadget for the flute: the “Glissando Head Joint”, which imitates the “whammy” or “tremolo” bar on an electric guitar. “It’s a very simple idea,” he says, “and I’m humbled that this brainwave crashed on my beach.” He has his own little company that distributes the devices, which are made in China and hand-finished by a craftsman at Hanes in Boston.

Robert Dick’s visit to Cleveland came about through a former student, Cleveland Orchestra principal piccoloist Mary Kay Fink. “Besides being America’s finest piccoloist, she’s an amazing player of contemporary music with extended techniques,” he said. Dick suggested coming out from New York to hold a master class, which he will do with CIM composers. “They’ll write short pieces for me to critique.” Dick will also speak about his life and career at a public new music symposium at CIM on Saturday, October 5 at 1:30, and the night before, he’ll join Fink and CIM president Joel Smirnoff in Bach’s fourth Brandenburg concerto at a CIM Women’s Committee benefit dinner. He’s looking forward to his reunion with Smirnoff: “We were in the same class at the High School of Music and Art in New York, but haven’t seen each other since.”

Finally, on Sunday, October 6 at 1:30, Robert Dick will play a public recital at The Music Settlement sponsored by the Greater Cleveland Flute Society, featuring music by himself, Telemann and Varèse. That performance will include his most popular composition, Lookout. “I was asked to write a piece for the National Flute Society’s high school soloist competition. That involves some of the most motivated high school players in the world — an unstoppable force. You present them a challenge and they’re just going to do it.” The piece represents Dick’s take on 60s and 70s rock music, “and it’s a tribute to the colorations of the electric guitar.” Also on the program: Telemann fantasies, “he was a pioneer in self-publishing just as I’ve been since the 80s,” and Varèse’s Density 21.5, “the cornerstone of all twentieth-century adventuresome program music — a beautiful, impassioned statement.”