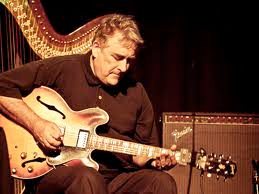 “Fred Frith is unique among improvisers in his ability to draw so effortlessly on such a wide variety of styles,” Oberlin Conservatory Assistant Professor of Computer Music and Digital Arts Peter Swendsen said during a recent telephone conversation. “His styles range from the purely sonic abstract worlds that we might think of as electro-acoustic, to things that draw extensively on popular forms, on jazz, on music for film and dance. His comfort zone is everything and everywhere.”

This week Northeast Ohio audiences will have two opportunities to hear the acclaimed songwriter, composer, improviser and multi-instrumentalist when Fred Frith performs concerts on Wednesday, February 26 at 8:00 pm in Fairchild Chapel (Bosworth Hall) at Oberlin College and Friday, February 28 at 7:30 pm as part of the CMA Concerts at Transformer Station series.

Swendsen, who studied with Frith while doing graduate work at Mills College, remembers him as a wonderful teacher who was very supportive. “I think for those of us who arrived at Mills College when he did — his first year of teaching was my and my classmates first year there as graduate students, and this was before YouTube— as aware as we were of his name and his history, I vividly remember the first time we saw him do what he does, improvising a solo set of music. I think it’s fair to say that it was a revelation for all of us. The fluidity with which he navigates styles, draws on his technical prowess and his musical creativity. Everything he has at his disposal is a little difficult to imagine until you see it happen in real life.”

In addition to his outstanding ability as an improviser, Swendsen was equally impressed by Frith’s dedication to his students. “Whenever you have someone of his stature who enters into an academic teaching position there are always questions like will they be around and are they really going to be invested? One of the things that always impressed me was how immediately dedicated he was to us, not just as a mentor who would be there now and then, but someone who was engaged on the ground as well.”

Swendsen observes that teaching appeared to be something Frith wanted to do in order to further his reach into the music world. “It seemed a proactive way for him to reach even more people, especially younger people, and I think that will only burnish his legacy as a musician even further. For the past fifteen years he has been sending students out into the world, so the legacy doesn’t stop with him but continues with all of the students with whom he’s worked so closely.”

Due to his travel schedule — he was in Glasgow working with the BBC Scottish Symphony — Fred Frith was unavailable for a telephone conversation but graciously agreed to answer questions (quite promptly, in fact) by e-mail.

Can you say a few words about what audiences can expect to hear?

They will hear me embarking on a journey with no stated destination and no guarantee that we will get there, though it’s very likely we’ll arrive somewhere. The thing is, with this kind of concert, why should audiences “expect” anything? Expectation won’t make it a better experience. Emptying themselves of any expectation might be a much better way to go. That’s how I try to start every solo concert, since I have no interest in simply “showing what I can do!”

Has your approach to teaching changed over time, and if so, how?

I think I’ve learned to be a better listener as a teacher, and not to fret so much about what my students think of me. Teaching is a form of collaboration and it works best when both sides are open to each other. So my first job is to arouse and maintain curiosity and discipline, and then to make sure those qualities remain as a motivating force long after “teachers” are not present! But of course, teachers are always present if you know how to find them…

I’ve enjoyed reading interviews where you talk about improvising. It seems that more and more young musicians who come from the Western classical tradition are now embracing the study of improvisation as well — which I think is a really great thing. But, why has it taken so long for this to occur?

Probably because of a couple of hundred years during which the very natural practice of improvisation was set aside and the fundamental emphasis of a Western classical training became to equip musicians to read music fluently, and to understand the technical exigencies of “the score” in terms of sound production and collective expression, and to embrace the discipline of following conductors and leaders. In the end this has had the effect of undermining the confidence of musicians trained in this system to make anything up that they haven’t been told to do — ironic in the light of the fact that most of the great classical composers were also great improvisers! Only because of a younger generation of players who grew up listening to many kinds of music, not just classical, and who like and aspire to more than one kind of musical practice, can we now see the emphasis in conservatories starting to change. They have no choice, and quite right too!

What have you and do you find enjoyable about working with groups like Ensemble Modern and the Arditti Quartet?

First of all, they are quite simply staggeringly good. Because that isn’t in any doubt they have nothing to prove, and that makes collaboration very open and direct. I feel completely accepted by Arditti. They are only interested in getting it “right” from the composer’s point of view, so they invest their whole attention on that goal. And they have a lot of humor, which certainly helps an insecure rock and roller such as myself!

Right now I’m in Glasgow working with the BBC Scottish Symphony, who are performing works by Roscoe Mitchell, George Lewis and myself—we’ll also play an improvised trio on the same bill—and I sense a huge shift since I last worked as electric guitar soloist with an orchestra about ten years ago. These players are younger, more open, very committed and interested, and Ilan Volkov, who’s curating and conducting, really brings out a special energy it’s quite wonderful to be involved in! I’m very grateful to be part of such a “moment…”

It might seem that there’s not a lot left to discover after three decades of experience with the Red Priest’s charming and evocative score, but this performance boasted a secret weapon: the young Spanish violinist Francisco Fullana, now the Orchestra’s artist-in-residence, whose affecting personality and easy virtuosity raised the solo part a quantum leap above the merely extraordinary. END_OF_DOCUMENT_TOKEN_TO_BE_REPLACED

END_OF_DOCUMENT_TOKEN_TO_BE_REPLACED

The Cleveland Orchestra’s second performance of the new season on Sunday afternoon, October 17 at the newly renamed Mandel Hall at Severance Music Center was just such an occasion. If the ensemble’s return to public concerts under the baton of Franz Welser-Möst wasn’t enough reason to light a bonfire, the Cleveland debut of a new work written for one of the Orchestra’s most popular soloists, and the swan song of one of its longest-serving members added extra fuel to the celebration. END_OF_DOCUMENT_TOKEN_TO_BE_REPLACED