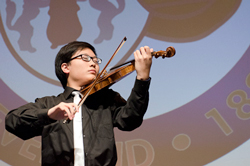 “I’m very excited,” says 16 year old violinist Jieming Tang. “It’s my first time ever to play with an orchestra.” On Saturday, November 16 at 7:30 pm in Plymouth Church, BlueWater Chamber Orchestra, under the direction of Carlton Woods presents a concert that features Jieming Tang in Beethoven’s Romanze No. 2. The program also includes Weber’s Concertino with clarinetist Amitai Vardi, along with works by Peter Maxwell Davies, John Corigliano and Felix Mendelssohn.

Jieming Tang was born in 1997 in Hefei, China and began his violin studies at age three. When he was eight, he began to study at the Central Conservatory of Music in Beijing, and entered the Conservatory’s pre-college division the following year. In April 2010, Tang came to the United States to be part of the Junior Young Artist Program of the Cleveland Institute of Music.

Tang was asked by BlueWater to choose one of the two Beethoven Romanzes and he chose No. 2 because he has performed it several times before with piano. “I’m glad I picked this one because right now there are so many things going on. I can’t imagine if I would have had to learn a new piece.”

Romanze No. 2 has been part of Tang’s repertoire for the past five years. “The first time I performed it was in 2008 at the National Center for the Performing Arts in Beijing when I was eleven. I was also asked to play it during the grand celebration in 2010 in Bali, Indonesia. It was a really big deal — they invited a lot of celebrities. They put a really big performance tent on the beach. But I can’t wait to play it with an orchestra after all these years.”

Rightfully so, Tang is a little nervous about the first rehearsal. “There are all the unknown things. I’ve asked different people and they gave me different ideas about playing with orchestra. Some say that it’s easier than with piano and some say that it’s harder. I think it is a matter of perspective so I am curious what I will feel. But I hear it is a very good orchestra so I think it will be great.”

After having spent three years in the Junior Young Artist Program at the Cleveland Institute of Music, Tang is currently in his first year in the Young Artist Program (YAP), something usually reserved for juniors and seniors, and studies with Jaime Laredo. “Mr. Laredo is very kind and I enjoy studying with him a lot. He knows exactly how much to push you. If a teacher demands too much, the student will get discouraged, which is a negative. But if a teacher is always praising you and not challenging you, then you will also not improve. But he knows how to challenge you in just the right way and it makes me want to go home and practice.”

A sophomore at St. Ignatius High School, Tang begins his day with the study of theology before classes begin at 8:00 am. This semester’s schedule includes biology, which he says is very challenging, English, honors geometry, Spanish and U.S. History. And, after a quick ride on the Rapid to CIM, Tang’s music theory class begins every day at 1:30. “I do have to get out of school early and I really appreciate that they have accommodated my schedule so I have free periods at the end of the day so that I can leave early.”

Additionally Tang’s YAP studies include Dalcroze Eurhythmics. “You study rhythm, because that is the foundation of all music. I also have a music analysis class with Joel Smirnoff and every other week we listen to and sometimes play music.” The program also has a secondary piano requirement, but Tang was fortunate to have passed out of the class.

In spite of his busy schedule, Jieming Tang remains active at St. Coleman’s where he recorded a CD which sold more then 1,000 copies and raised $5,700 for the church’s Capital campaign. He continues to play for mass once a month as well as special occasions. He’s also getting some professional experience by playing weddings.

You could see the relationship at work on a practical level. Repertoire for two players at the same piano requires a certain choreography. There’s just one of each pedal to share, and the hand crossings left and right — which can be so fun to watch a soloist pull off — get more complicated when another person’s involved. At times, Pompa-Baldi drew a hand away from the keyboard and into his body, making room for Friscioni, and at the close of a few delicate phrases, the two were crouched together over the same final notes at one end of the instrument. END_OF_DOCUMENT_TOKEN_TO_BE_REPLACED

The signature sounds of these famous film scores are not so much John Williams’ invention as allusions to other classical pieces. The foreboding half-step from Jaws, growing more and more furious in the cellos and basses, shares something with Dvořák’s “New World” Symphony and Bartok’s Miraculous Mandarin. END_OF_DOCUMENT_TOKEN_TO_BE_REPLACED

Unlike most concert pianists, who seem to have taken to the keyboard while they were still learning to walk, Kharitonov only began his studies at the age of 16. But he plays with such naturalness and easy virtuosity that you’d never imagine he came late to the party. END_OF_DOCUMENT_TOKEN_TO_BE_REPLACED

Each concert in “Beethoven and Beyond” includes two of LvB’s string quartets with a contemporary work in between, usually by way of contrast, although in her introductory remarks, primo violinist Annie Fullard drew thematic connections between the pizzicati in Beethoven’s “Harp” Quartet and Jessie Montgomery’s Strum. END_OF_DOCUMENT_TOKEN_TO_BE_REPLACED