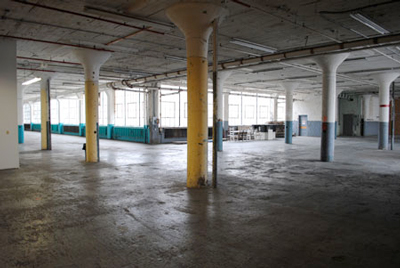 Since performing their first concert in May of 2008, FiveOne Experimental Orchestra, a Cleveland-based music collective of composers and performers, has presented concerts with a ‘no-boundaries’ approach to music. The Orchestra’s vision is to create a diverse stream of fresh, new-perspective musical works that are a meld of genres, styles, and artistic disciplines.

FiveOne often incorporates many artistic disciplines through a variety of collaborations, including sculptors, filmmakers, dancers, and visual artists. They often perform concerts at places such as the Sculpture Center and the East Cleveland Township Cemetery as well as more traditional venues like the Cleveland Public Library.

On Saturday, Saturday, April 5th beginning at 8:30pm NEOSonicFest presents FiveOne Experimental Orchestra at The Screw Factory in Lakewood. “It’s quite a big deal for us,” musician, composer and FiveOne Artistic Director John HC Thompson said during a recent telephone conversation. “I think the Festival organizers were aware of the Experimental Orchestra’s mission to perform in unusual spaces. And knowing that, the pressure was on for me to find a cool place to play.”

Why The Screw Factory? “We knew we wanted some place that was bizarre and we looked at several places. But they were very accommodating and had the date free and they were open to all of my wacky suggestions.” Thompson adds that he had played a jazz gig there last summer and had a great time playing in the abandoned factory.

Thompson describes The Screw Factory as “a massive complex” that once served as the home of the Templar Motor Company, pointing out that a number of antique cars can still be found in the building. “It was also a production facility for nuts and bolts which is how it got its name, Thompson said, “and today they manufacture electrical wire. There are spools of it everywhere and we’ll be using it as decorations for the concert. The second and third floors have been converted into artists’ studios, so the building is filled with interesting people who are trying to create their own thing. So it’s a good home for new music.”

Saturday’s concert will take place in a large, open, cavernous space and the musicians will perform in the center. “We’ll try to get the audience to move around the orchestra 360 degrees. The bar will be behind the orchestra so that should encourage people to move around the space. We’ll also have fork lifts on the sides of the stage and big working lamps. So visually it will be kind of gritty and hopefully people will get into that spirit.”

The program, which includes music by Missy Mazzoli, Michael Laurello, David Crowell, Matthew Frederick, Jeremy Allen, Jordan Nobles and Judd Greenstein, was chosen because it fits FiveOne’s current musical objectives. “In the past we’ve had a fairly large group but this year we wanted to pare things down and keep the same set of players for the entire season.” Thompson admits the orchestra’s instrumentation is a little unusual: flute, clarinet, violin, cello, bass, two percussionists, piano and guitar. But they used that as the starting point for finding music. “Pieces had to have a combination of those instruments or a subset.”

In the past, FiveOne has primarily performed music written by composers who were members of the group, but Saturday’s concert marks the first performance that involved an active search process for musical scores. “We listened to a lot of music and I learned a lot myself about the current state of music,” Thompson said. “All of the music has an energy and a fresh air to the sound that I think that is going to communicate to an audience — people who may have been listening to pop and rock music before and are now trying to find a home in modern classical music.” Thompson also thinks the music will highlight the diverse musical talents of FiveOne’s current personnel. “All members are rooted in classical but also very rooted in jazz, improvisation and world music, so it’s a real esprit de corps.”

John HC Thompson shares his insights into the evening’s music.

“I love this piece. The first time I listened to it I knew we were going to include it. It has a fresh sound and Missy is attracting a lot of attention these days. And that being said, you cannot beat that title! I am very big on giving my own works provocative names as another way of making the audience sit up and listen. “

“It’s a piece for guitar and tape. The recorded playback will be heard through speakers both left and right with one that is delayed. To intensify the effect of the delay we’ll face one speaker backward and one forward. The playback is a near replica of what the live guitar is playing, kind of like a guitar duet but one is pre-recorded. It produces a very interesting sound.”

David Crowell – Waiting in the Rain for Snow

“It’s a wonderful piece of music and like the Mazzoli it too has a fresh air sound. It’s like filling your lungs with good clean cool air. Very busy and very fast. I’ve heard David describe the piece as the anticipation, which is a metaphor for transformation. It has a slow development that represents the crystallization of ice turning to snow.”

“One thing we thought would be kind of neat for the orchestra to do is to find a way to musically connect to the rock and pop world. But instead of commissioning composers to write original music, we decided to contact composers that we like and ask them to pick any song from the rock and pop world and arrange it for us any way they want. We hope to create a buzz with composers because I think every modern classical composer has grown up with rock music. And everybody has their little secret of music they like from the pop world. So Matthew is our first experiment in this regard. Flying Lotus is a music producer and rapper so I’m excited to see how people react to it.”

“This is the same piece he did for our sound cinema project. Although it is originally for unmetered piano solo, Jeremy has arranged it for violin, cello, bass, guitar and piano. The arrangement has retained its serene, peaceful, drifting sound the original movie score had. It’s a beautiful piece.”

“We selected this because we like to do a lot of improvising. Musically it has a leading line that can be played by any instrument. Then there are also accompaniment cells and everybody else can pick which one they want to play. The real challenge is choosing the right moment in the space of the melody to place the accompaniment figure. Each lead line has 20 different cells to choose from. It’s a great piece that was nominated Classical Composition of the year in 2012 and Canadian piece of the year in 2012 at the Western Canada Music Awards.”

“This too is from the East Coast school and has that same fresh sound. But mostly it’s a great show closer.”

END_OF_DOCUMENT_TOKEN_TO_BE_REPLACED

The Orpheus myth inspired French Baroque composers Jean-Philippe Rameau and Philippe Courbois to write expressive solo cantatas about the famous Greek musician-poet and his futile attempts — because of his own impatience — to rescue his beloved Eurydice from the grasp of Pluto in the Underworld. These are beautifully performed by the clear-voiced soprano Hannah De Priest and the velvet-throated baritone Jonathan Woody (who makes a walk-on appearance in the Rameau). END_OF_DOCUMENT_TOKEN_TO_BE_REPLACED

Now that live concerts are beginning to proliferate, it was delightful to hear Oberlin cello professor Darrett Adkins ring a change on the solo suite format with his Hypersuite No. 3 on September 28 in the Cirigliano Studio Theatre at Lorain County Community College. His program opened the new season of Signature Series performances in Elyria, and was dedicated to the memory of Eva Hornyak. END_OF_DOCUMENT_TOKEN_TO_BE_REPLACED