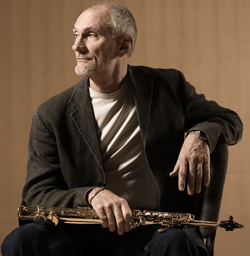 Though described as “an electrifying and versatile soloist” by the New York Times, it’s difficult to categorize virtuoso saxophonist and composer Howie Smith. As a performer, he has worked with musicians, organizations and composers as diverse as Lester Bowie, John Cage, The Cleveland Orchestra, Mark Dresser, Iron Toys, Mike Nock, Elvis Presley, Clark Terry, and the Tone Road Ramblers. As a composer, his catalogue includes works for big bands and combos, for string, wind and percussion ensembles, for electronics, and for mixed media.

On Wednesday, April 2nd beginning at 8:00 pm in Cleveland State University’s Drinko Hall, NEOSonicFest presents Howie Smith in a performance consisting of a single work, Smith’s own The Speed of Time for saxophone and nine-channel surround audio.

“It’s hard to believe the piece is twenty years old,” Smith pointed out during a conversation in his Cleveland State office where he served as Coordinator of Jazz Studies from 1979–2005 and Chair of the Art Department from 2003-2007. “If we were doing it now, with all the digital technology, it would be a lot easier. Back then we had to figure out how to do everything.”

Smith went on to explain that all of the pre-recorded mixture of saxophone, voices, percussion, synthesized keyboards, and electronics was done on two-inch tape with a twenty-four track machine. Then, the twenty-four tracks were mixed down to nine channels. “We also had to come up with a way to build a nine-channel stereo system.”

When did Smith first develop his fascination with the movement of sound? “That goes back to high school. What’s a better description of moving sound than a marching band? I grew up in Reading, Pennsylvania where drum and bugle corps were a really big thing. When you watch a half-time show at football game, what it sounds like to people in the stands all depends which way instruments are facing. And if there’s a drum and bugle corps coming down the street, the sound changes as it gets to you and as it goes by. Of course Charles Ives was playing with this kind of thing a long time ago, but I think that’s where I really got into it.”

Smith said that how sound is heard in any room stems from the idea that no two people in a hall are hearing the same concert — both for acoustical and physiological reasons. “Everybody comes with a different set of expectations, and that affects how they respond to what they hear. The other thing has to do with where you are sitting. I once heard Frank Zappa say that music was in some ways like an air sculpture, and [performers] are re-arranging the molecules in the room. There are a lot of pieces I’ve done where I move around. It’s like the old Texas tenor players who would walk the bar. You get out and you play the audience. But to me it is about moving the sound around.”

The Speed of Time lasts between 60 and 75 minutes and Smith will play the room accompanied by sections of recorded sound, along with sections that are unaccompanied. But is Smith improvising his part throughout? “There is a certain amount of ritual involved. There are some things that I have to play as they are written and other things that will be improvised. And often I do need to do a very specific thing in terms of tempo, mood and structure.” The piece is also physically challenging. Smith jokes, “since I’m the only person playing, getting ready for it is like going into training.”

END_OF_DOCUMENT_TOKEN_TO_BE_REPLACED

Rodgers & Hammerstein’s Cinderella was originally produced for television in 1957 — seven years after the animated Disney film was released — and starred Julie Andrews. According to the Rodgers & Hammerstein website, it was viewed by over 100 million people. END_OF_DOCUMENT_TOKEN_TO_BE_REPLACED

The story line has its origin in an 1855 play and an 1842 farce that Thornton Wilder mined for his 1938 play The Merchant of Yonkers. When that turned out to be a flop, in 1954 Wilder made the crucial decision to re-center the show around the character of the legendary marriage broker Dolly Gallagher Levi and renamed it The Matchmaker. END_OF_DOCUMENT_TOKEN_TO_BE_REPLACED

The Dodero Center for the Performing Arts at the Gilmore Academy in Gates Mills is one feature of an impressive campus. The auditorium is shallow, the stage is deep, and the ensemble played without a shell. Throughout the program, the sound, especially in instruments’ lower registers, tended to disappear. END_OF_DOCUMENT_TOKEN_TO_BE_REPLACED