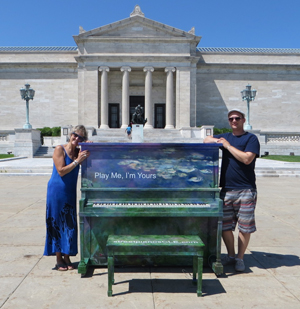 On his website, Jerram says “The idea for ‘Play Me, I’m Yours’ came from visiting my local launderette. I saw the same people there each weekend and yet no one talked to one another. I suddenly realized that within a city, there must be hundreds of these invisible communities, regularly spending time with one another in silence. Placing a piano into the space was my solution to this problem, acting as a catalyst for conversation and changing the dynamics of a space.”

On Thursday, July 18 beginning at 11:15 am on Toby’s Plaza at MOCA, Luke Jerram will lead a kick-off event. All of the pianos will be on display (the only time they’ll be in one place at one time) and the event will feature young pianists playing simultaneously under the supervision of Sophié van der Westhuizen.

“This is like a dream partnership,” says CIPC Executive Director Pierre van der Westhuizen. “It has blossomed into a coming-together of community.” Host organizations include Case Western Reserve University, the Cleveland Museum of Art, The Cleveland Orchestra, the Botanical Gardens, Cleveland Institute of Music, Rock & Roll Hall of Fame, and many more. Allied Piano is donating moving services, Steinway Hall of Akron is donating the pianos and Sherwin-Williams is donating gallons of paint. The project has been generously funded by the George Gund Foundation.

The entire philosophy of the project is that the pianos should belong to the community — so they must be in public spaces that are accessible by the community at all times. “This is Luke’s concept and I thought that I could combine that with my vision of creating and spreading the buzz about pianos during the competition,” van der Westhuizen said, “so this is a great alignment of two visions.”

The Cleveland version of “Play Me, I’m Yours” happened as the result of a series of fortunate events. Van der Westhuizen read an article in the New York Times (photo above) when the project was done in New York City and thought that it sounded like so much fun that he filed it at the back of his brain. Then he was having coffee with Deena Epstein of the George Gund Foundation, who said she had read a Times article about New York City doing this painted piano project and asked him if a project like that would be something the Piano Competition would like to do.

“I took the idea back to the office and the staff thought it was a great idea as well”. But the executive director decided to check whether or not it was a licensed concept. “I am aware that you need to be sensitive to the fact that concepts such as these are often owned by someone. Additionally somebody out there must have done this before, so why reinvent the wheel?”

Van der Westhuizen Googled “painted pianos on the street” and Luke Jerram appeared. He contacted Jerram (left), who filled him in on what it would take to bring the project to Cleveland.

“Later, I was talking to Lara Kalafatis from CWRU about a different subject and she too told me about NYC and the piano project. I said yes, and we are going to be doing it here. She immediately wanted to be involved and that is a blessing because there are so many resources that the Competition would have had to struggle to get ahold of — for example, a space in Uptown to paint the pianos — and also helping to fund the project.”

“Luke has created a guidance and instruction document for the installation of the artwork. All of the pianos must be decorated to certain guidelines. When he arrives he does the final positioning of the pianos and places his logo on each instrument.” The guidelines even include what to do if it rains. “In case of inclement weather, a tarp is located on the back of each piano with metal brackets. Each host organization will have a designated piano buddy so in case of bad weather that person will run out and cover the piano. Because of the drastic Cleveland weather we have gone one step further and will have larger tarps that will fasten with a lock so they don’t fly away.”

Host organizations are asked to help promote the pianos and to encourage people to play. Promotions are also occurring through the use of social media and hosts are invited to go wild with their own installations. “The creativity comes from those organizations. The great thing about this project is that all of these partners have come forward — all of these organizations that the Competition has never interacted with before.”

“My only plan is to encourage the contestants to go out and play pop-up performances, which I’m sure will draw huge crowds”, van der Westhuizen says. “I encourage people to make a day of it and go from piano to piano. People have posted that they are working on some pieces and one these days they’ll go from one to the other and play. So it is already happening: people are already mobilizing and the wonderful thing is that I have nothing to do with it, it’s all part of the community. I know there is a guy planning to stand at one instrument for a day and give free piano lessons. To me stuff like that is exciting.”

Photo by Della Homenik of the Cleveland Museum of Art piano designed by Robin VanLeer (left), and painted by Robin Heinrich (right).