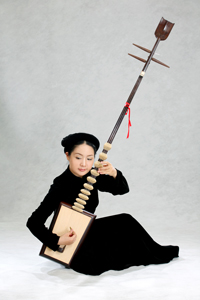 For the past two and a half months, Vietnamese musician Phạm Thị Huệ has been presenting workshops with Cleveland area students about the traditional music of her country known as Ca trù, as part of the Cleveland Foundation’s Creative Fusion program. During her stay, Phạm Thị Huệ’s host organization has been Young Audiences of Northeast Ohio. “It has been wonderful to be part of this program,” Huệ says “It has been great to meet the all of the other artists from other countries who are also here.”

On Friday, June 14 at 7:30 pm at the Spiritual Life Society (Old Church on the Green) in Hudson, Phạm Thị Huệ, voice, đàn đáy (long-necked trapezoid lute), and đàn tỳ bà (pear-shaped lute), joined by her 14-year-old daughter Nguyễn Huệ Phương, voice and phách (Vietnamese percussion instrument) will present a concert that will also feature a reception with a tasting of rare Vietnamese green and flower-scented teas. On Wednesday, June 19 at 7:00 pm at the First Unitarian Church of Cleveland in Shaker Heights, Huệ will present a solo concert of traditional Vietnamese music.

Born in Cam Pha Town, in the Quảng Ninh Province of Vietnam, Phạm Thị Huệ came from an artistic family. Her father was a painter, photographer and self taught musician. Huệ began her musical studies at the age of five and in 1981, at the age of eight, was admitted to Hanoi Music Academy. In 1990, along with six of her classmates, Huệ formed Trúc xinh (Pretty Bamboo) band and later formed The White Tuberose Band.

Huệ has studied with Vietnamese musicologist Bui Trong Hien and composition with the Vietnamese modernist composer, Tran Trong Hung. Following her graduation from the Hanoi Conservatory of Music, Huệ began to lecture and teach Đàn tỳ in the Conservatory’s traditional music department. In August 2006, Huệ helped to establish the Ca trù Thang Long Club in Hanoi. In 2009 she was awarded the Gold Medal in Vietnam’s National Festival of “Ca trù”, the same year that UNESCO inscribed Ca trù on the Urgent Safeguarding List of the Intangible Cultural Heritage of Humanity.

I spoke with Phạm Thị Huệ in the living room of her host family and began by asking her to talk about her activities at Young Audiences of Northeast Ohio.

Phạm Thị Huệ: At first I had trouble with how to begin the activities for Young Audiences, but eventually we figured things out. It was a big lesson that I learned. I created a Power Point presentation about the geography of Vietnam, its location, the weather, the religion, the culture and of course, Ca trù music. I also perform for the children.

Mike Telin: I read that the roots of Ca trù can be traced back to the eleventh century?

Huệ: That’s right, but the name Ca trù came in the fifteenth century; it means Ca — to sing — and trù — a bamboo cart — so it is like singing for the bamboo cart.

In the beginning Ca trù came from the community houses and the temples. If you wanted to open the temples you had to play Ca trù music. So from the beginning it was a ceremony of music. But only men of a high level in society can go inside the temple, so it is a very special place. These people became the audience of the music. They would invite Ca trù groups to their private homes when they held special events such as birthdays and parties. It was also the music of the king.

MT: I understand it is a combination of poetry and music.

Huệ: People began to write poems because sometimes they would sing for as many as three days. Many poets liked to listen to the music. Each year they held a competition where groups came from many regions of the country. They all performed and the best group was chosen. The winner received a gift from the King. Also once you returned to your village many people wanted to invite you to their homes.

MT: Can you tell me a little bit about a Ca trù group?

Huệ: There is the instrumentalist, the singer/percussionist and the drummer. The drummer can also decide if a performance was good or not. Usually they only say, that was great. Very seldom do they say you were bad. But sometimes they do. Ca trù is comprised of musical sentences or phrases and when the drummer plays on the top of the drum it signifies the end of a phrase. Sometimes it marks the end of a phrase of music and other times the end of a lyrical phrase.

MT: I also read that Ca trù has not been influenced by western music or any other styles of music.

Huệ: [laughs] The unlucky brings the lucky. It was unlucky because during the war the country experienced a loss of the temples so the musicians had to move to the city where they created singing houses. The houses were small with room for only an audience of ten to fifteen. Also during that time very few people understood how to write Ca trù music. The people who owned the singing houses wanted to keep the audiences so they invited young people and served food, drank wine and sold opium. [Because of this] many singers decided not to [perform] at the houses. And after the war the houses were closed because they sold opium.

During that same time people wanted to make the other music in the country to be more like western music. This happened all over Asia, but while this was occurring Ca trù was not being performed. Ca trù also has its own rhythms which makes it difficult to study and it is still difficult to find teachers. So it remained uninfluenced by western music. So when people did begin to realize that Ca trù was important music and people began the effort to revitalize the art form, it was still in it’s original form, so out of the unlucky came the lucky.

MT: Why were you drawn to Ca trù?

Huệ: Because of the spiritual nature of the music. I have always been able to sing many types of music but it was impossible for me to sing Ca trù so I wanted to study it and to see what it was all about. Also when I studied with the ethnomusicologist Trong Hien I began to understand that it is important to keep traditional music and traditional ways alive. And if your traditional music is strong that means the entire country is strong. That’s why when I found the master I wanted to focus myself on Ca trù.

END_OF_DOCUMENT_TOKEN_TO_BE_REPLACED

The Orpheus myth inspired French Baroque composers Jean-Philippe Rameau and Philippe Courbois to write expressive solo cantatas about the famous Greek musician-poet and his futile attempts — because of his own impatience — to rescue his beloved Eurydice from the grasp of Pluto in the Underworld. These are beautifully performed by the clear-voiced soprano Hannah De Priest and the velvet-throated baritone Jonathan Woody (who makes a walk-on appearance in the Rameau). END_OF_DOCUMENT_TOKEN_TO_BE_REPLACED

Now that live concerts are beginning to proliferate, it was delightful to hear Oberlin cello professor Darrett Adkins ring a change on the solo suite format with his Hypersuite No. 3 on September 28 in the Cirigliano Studio Theatre at Lorain County Community College. His program opened the new season of Signature Series performances in Elyria, and was dedicated to the memory of Eva Hornyak. END_OF_DOCUMENT_TOKEN_TO_BE_REPLACED