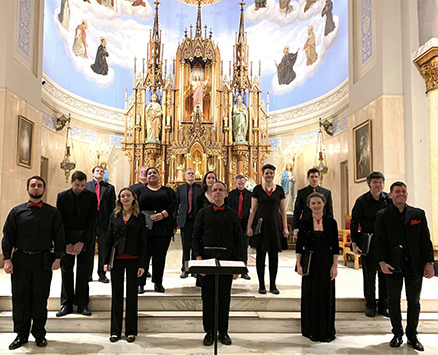 Friday’s concert, “Journey Home: Finding Unity After Loss,” delivered its themes upfront. Immigration and exile, of the Biblical variety, were the subjects of the two big works that bookended the evening. Additional music by Polish composer Mikołaj Zieleński and Slovenian composer Jacob Handl allowed Quire Cleveland to bring its theme into the present day. By programming these two Slavic composers, the ensemble alluded to Cleveland’s own history of immigration. And the concert venue drove the point home: St. John Cantius serves as a center for the city’s Polish community. Saturday’s concert at Cleveland’s St. Vitus Church would cover the Slovenian side of things.

Simply put, Quire Cleveland was making an argument for the timelessness of immigrant stories. Music — particularly early music, which is old in content but new in ethos — is a persuasive way to make the case.

The musicians of Quire Cleveland sang with an admirable level of intensity and engagement throughout. They kept the musical line through longer phrases, while still observing the characteristic details of period performance — a note that swells here, a phrase that dies there. These stylings need direction, and the ensemble always masterfully had the destination of a phrase in mind.

With Thomas Tallis’ The Lamentations of Jeremiah, Quire found a match between its passionate, engaged style and the seriousness of the music’s subject matter. Stage setting abounds in Tallis’ piece: the intoning of Hebrew letters and headings, phrases that curtain the scene, and passages at the center of the action. This found the program at its most mournful and dramatic, the “loss” referenced in the concert’s title.

Robert White’s Lamentations, drawn from the same Biblical source as Tallis’ setting and using many of the same musical devices, does a little less of the dramatic work on its own. Artistic director Jay White underlined the structure where necessary, conducting a sensitive performance that brought out little details — like a hard ‘c’ consonant across the voices — while maintaining a larger arc. White effectively varied the lengths of pauses as he went, which kept the performance interesting and responsive.

Quire changed pace with the two Slavic composers. Two short, understated works by Mikołaj Zieleński — Vox in Rama and In monte Oliveti — were musical miniatures compared to the rest of the repertoire. Jacob Handl’s Miserere mei, Deus was more substantial and offered a different ensemble setup: antiphonal — in two alternating choirs — a chance to hear individual voices a little more.

Before intermission, White and his ensemble invited the audience to sing along to a favorite Polish hymn, Serdeczna Matko, chosen by the parishioners at St. John Cantius. It made a connection between the familiar music you might hear there every Sunday and the special, studied singing that Quire Cleveland showcases.

END_OF_DOCUMENT_TOKEN_TO_BE_REPLACED

What was that strange din coming over the live feed from Ludwig Recital Hall on Friday evening, July 23, as the Miami String Quartet filed onstage to play the third faculty recital of the Kent Blossom Music Festival? Accustomed as we were during the pandemic ban on live audiences to hearing the sound of no hands clapping, it was both startling and thrilling to witness a large crowd putting their hands together to welcome one of the Festival’s perennial favorites back for an in-person performance. END_OF_DOCUMENT_TOKEN_TO_BE_REPLACED

Practical reasons aside, there aren’t many ensembles who can put together an all-Mozart evening as elegantly as The Cleveland Orchestra. END_OF_DOCUMENT_TOKEN_TO_BE_REPLACED