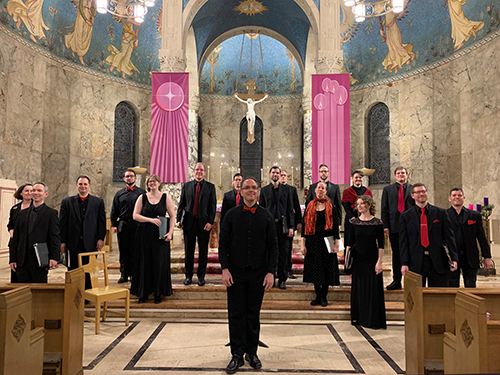 It made perfect sense for artistic director Jay White and Quire Cleveland to structure their “Carols for Quire X” program around the “O Antiphon” motets, mixing them with similarly themed English carols. To provide context, each motet was preceded by the matching original Gregorian chant antiphon. I attended the second concert on Saturday, December 21 at the beautiful, domed Our Lady of Peace Church just off Shaker Square.

This opening program of the ensemble’s 12th season — the second with White at the helm — showed off Quire’s stylistic range, clarity of tone, and impeccable intonation. The sixteen professionals blended miraculously, singing without vibrato, and gave off ample flowing energy in the vibrant acoustics of this large Roman Catholic church.

The various chants were seamless beauties no matter the number of people singing. White drew out supple rhythms that maintained a clear flow. Each chant began with the opening name sung by a soloist, who signaled the start of the matching motet with the same opening.

Utilizing the 2017 edition of Attaingnant’s book by Mick Swithinbank, Quire regularly changed formation as the number of parts ranged from four to six. The early 16th century finds polyphony full of triads, and Quire made them sound like resonant jewels. Each motet was structured in three sections, with the antiphon text divided between the first two. The final textless sections were sung gorgeously on “ah,” the few pungent dissonances along the way making the final consonance all the more glorious.

Equally lovely were the carols, ranging in time from Michael Praetorious’s Lo, how a Rose e’er blooming (1609) to the 20th century. The juxtaposition of Renaissance modality with its modern brother gave the concert a consistent flavor. Ralph Vaughan Williams’s arrangement of the English carol “The truth from above” ends each verse with a surprising, yet beautiful major chord. The various arrangements by David Willcocks were deliciously effective, while Peter Wishart’s Alleluya, a new work bounced joyously. Quire sounded magnificent throughout, singing with crystalline English diction.

But the highlights of the concert were the two communal carols: O come, all ye faithful and Hark! The herald-angels sing. With elaborate descants from Quire’s sopranos, we all sang, filling the large church with a joyful noise. Provided with four-part notation in the program, some of us sang in harmony as well. It’s hard to imagine a more delightful evening in collective song.

Jackson began the program with a recitation of Langston Hughes’ poem “Helen Keller” — the first of five poems by Hughes that served as interludes between each piece on the first half. END_OF_DOCUMENT_TOKEN_TO_BE_REPLACED

Pianos with pins and tape on strings, a bass drum and tam tam, crotales, Almglocken, and vibes. Microphones were hooked up all around the instruments. The feed was sent to speakers around the room. Lighting designer Nicholas Houfek hung incandescent globes over the arrangement of instruments from thin black wires stretching across the beams. END_OF_DOCUMENT_TOKEN_TO_BE_REPLACED

From the podium, Elim Chan set an ambitious tone for the evening. The rising star conductor, here in her Cleveland Orchestra debut, has a commanding style, and every twist and turn in Saturday’s performance tracked closely with her baton. END_OF_DOCUMENT_TOKEN_TO_BE_REPLACED