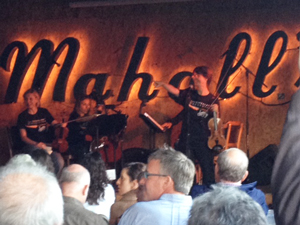 Seated in the open concert venue, audience members of all ages enjoyed the quartet’s repertoire ranging from Brandenburg concertos to Mozart and even crowd-pleasing Beatles arrangements of Yesterday and Eleanor Rigby. The atmosphere was that of a casual summer concert — the room was filled with chairs, but passersby also enjoyed the music from the outside, leaning over the rails to catch a glimpse of the packed venue.

The four intrumentalists would intersperse their “sets” with comments, focusing on themes such as vibrato or repetition, with “pop quizzes.” (Watch a video clip here.) Audience members could win TCO concert tickets in exchange for correct answers to trivia questions, such as “The Cleveland Orchestra performed in Lakewood in which decade?” (Answer: the nineteen-teens, specifically 1919).

Katherine Bormann led a demonstration on vibrato in which she described the method she used as a child for learning the technique, which consisted of filling a film canister with rice and shaking the canister in rhythm, eventually imitating this motion at the instrument. She said, “If your parents don’t go crazy, you eventually learn how to vibrate, and then hopefully it becomes a tool. It’s an expressive tool, and it hopefully becomes more natural sounding.” The audience happily applauded as the violinist demonstrated her current, richly beautiful vibrato.

She proceeded to explain the differences in sound with using vibrato or no vibrato. The quartet played three pieces with little or no vibrato, including a Bach chorale, a Mozart quartet, and Yesterday. After the final set, there was a question and answer session between the quartet and the audience. 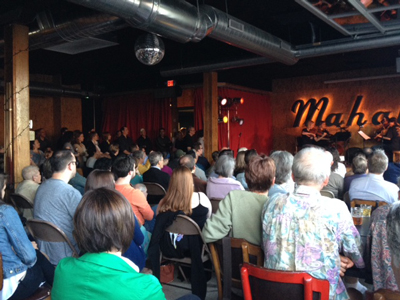 Isabel Trautwein made reference to the history of the orchestra and its involvement in the greater Cleveland community: “Cleveland’s Orchestra [as it was then called] was meant as an educational tool to build audiences so that people would come hear the fantastic orchestras at the time that would come here, like the New York Philharmonic and the Chicago Symphony. And then eventually a conductor came and said, ‘Wait, we don’t need to have fantastic orchestras come from out of town. Why don’t we just make this one really great?’ And that’s what it’s been since about the 1930s.” In exchanges after the concert, the quartet members commented on how receptive the audiences have been at each Lakewood venue and how special it has been to be able to connect with audiences on a personal level.

END_OF_DOCUMENT_TOKEN_TO_BE_REPLACED

Franz Welser-Möst led the final bows on Saturday night at Severance, like the star of any show should. The Cleveland Orchestra’s music director is in his element presiding over the ensemble’s annual opera production, which this season packs the drama. Verdi’s Otello — in a concert staging that opened May 21 and runs for two more performances (May 26 and 29) — demands big voices, instrumental forces to match, and a conductor who can give it all shape and direction. END_OF_DOCUMENT_TOKEN_TO_BE_REPLACED

The cimbalom was the feature of the show, an instrument capable of taking on many personas. Its performer, Chester Englander, has shaped his career around the instrument, and has inspired composers to write more repertoire for it, some of which was presented on the program. END_OF_DOCUMENT_TOKEN_TO_BE_REPLACED