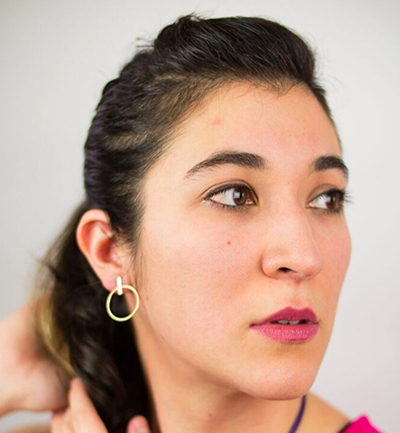 Vocalist Stephanie Lamprea has always had an interest in solo vocal music that challenges the conventional use of language. “Nowadays there are more doors opening than closing when it comes to new music, so different kinds of sounds can now live at the same time,” she said in a telephone conversation.

On Saturday, June 8 at 1:00 pm, the Boston-based vocalist will bring her intriguing array of sounds to Praxis Fiber Workshop as part of this year’s Re:Sound Festival. The lineup will also include Dykes & Young — the duo of bassist Laura Dykes (Austin, TX) and violinist Jeffrey Young (Boston, MA). Click here to purchase tickets.

Lamprea noted that the cultivation and creation of new music is akin to the birth of a pidgin language — a grammatically simplified means of communication that develops between two or more groups that do not have a language in common. Typically, its vocabulary and grammar are limited and often drawn from several languages. “I thought that was such a beautiful way to think about how all of us new music makers bring in our own esthetics and cultures.”

Realizing this concept is Louis d’Heudieres’ Laughter Studies 2, a piece Lamprea knew needed to be a staple in her repertoire from the first time she performed it. “This is an interesting work where I choose someone from the audience, and each of us will listen to an audio track that tells us to describe or imitate the sounds that we hear. This creates an interesting clash of drama — the speaking of words or making of weird sounds that sometimes relate to each other and sometimes not.”

The program also includes Aaron Jay Myers’ Lichens III, the third of the Lichens series which embodies the many beautiful and bizarre types of this organism through language displacement and extreme vocal range. “I met Aaron when I moved to Boston and was looking for performance venues. He was curating a series at the Boston Sculpture Gallery. I love his music, and he and his wife are staples of the Boston new music scene.”

A new work by Cullyn Murphy will complete the program. “According is a celebration for soprano and a briefcase of items of interest,” Lamprea said. Musically, textually, and physically, the work explores teleology, middle-ground, and one’s forced desire to move past uncertainty.

Because she has perfect pitch, Lamprea often challenges composers to write pieces that are void of pitch references. “Having perfect pitch has been extremely helpful in being able to pick notes out of thin air — it does cut down on practice time.”

However, while she was a student at the Manhattan School of Music, the soprano discovered that perfect pitch can also be a burden to bear. “Because I was relying so heavily on it, I didn’t have a relative pitch connection with the instruments around me. My teacher told me to take up piano tuning because perfect pitch in not helpful when it comes to tuning pianos — you have to think relatively. So I became an intern in the piano tuning department at MSM.” Lamprea said that now, when she is “picking notes out of thin air,” she hears how those notes relate to the pitches around her.

Growing up in San Antonio, Texas, Lamprea and her sister were in many after-school string programs and youth orchestras — she described herself as a mediocre cellist. She began studying voice with a church organist in late junior high, and soon found herself singing the music of Bach and Handel. “At home we didn’t listen to a lot of non-classical music — but not in a weird Sound of Music way. My parents are from Colombia, so we listened to classical or Colombian music.”

Lamprea eventually found her way to MSM. She earned an opera degree, which she said “felt okay, but not quite right.” It was there that she began to be approached by composition students who asked her to perform their works. “I got a lot of excitement from singing those new pieces,” she said. “I wasn’t sure why, but they just felt better in my voice.”

After graduating, the soprano began to study privately with Lucy Shelton, found an administration job to pay rent, and began exploring the world of new music even more. “Some friends suggested that I curate my own shows that focus on new music,” she recalled. “I did and I felt more like myself — it was like, oh, here’s Stephanie.”

Supported by engagingly, yet simple staging by Cara Consilvio, a well-prepared cast of singers told the archetypal story of Cinderella with charm and flair. Framing the production was  a sparse but colorful set and wonderful lighting by Dave Brooks. END_OF_DOCUMENT_TOKEN_TO_BE_REPLACED

END_OF_DOCUMENT_TOKEN_TO_BE_REPLACED

The music isn’t easy to play, either. Over the course of two hours, all of the musicians brought fantastic focus to the unrelenting tricky rhythms and countless layers of parts, all of which require a high level of individual responsibility. Even in the moments of calm, the accompaniment remains perpetually unsettled. Adams — who made a sprightly presence on the podium — combines minimalist, repeating motives in gradual layers, which eventually become so dense they overwhelm the senses. Lisa Wong deserves special mention for her thorough preparation of the Cleveland Orchestra Chorus, as does Jennifer Rozsa for the Children’s Chorus, which made a brief but memorable appearance in the last few minutes. END_OF_DOCUMENT_TOKEN_TO_BE_REPLACED