In a highly anticipated and much-publicized special event last Wednesday at the Cleveland Institute of Music, the young pianist-composer Daniil Trifonov premiered his own First Piano Concerto with the CIM Orchestra, as a benefit to the school’s scholarship fund.

Already known to the musical world for his appearances with most of the world’s major orchestras and for his winning streak in the Rubinstein, Chopin, and Tchaikovsky Competitions, Trifonov’s prolific musical activities have increasingly entered the realm of composition, with several works for solo piano. The Piano Concerto (2014), composed in France, the Dominican Republic, and in Cleveland under the guidance of his teachers Keith Fitch and Sergei Babayan, is his largest work to date. It is an impressive achievement.

When assessing the value of any new work, at least two considerations are foremost —especially when the performer and composer are one and the same: the work’s merit musically and technically, and the performance’s success in highlighting these aims.

Trifonov’s concerto, dense and complex in its construction, makes formidable demands on the soloist such that likely very few pianists will succeed in attempting its whirlwind of notes and hand-crossings, and quixotic changes of character. Those present on Wednesday witnessed a concerto whose rhythmic excitement compensated for any lack of hummable tunes, and whose emotional palette ranged from sinister to celestial.

The three movements, thematically linked by motives introduced in the low string introduction to the first movement, are an architectural integration of thematic development that is daunting in scope. Throughout the piece, themes and motives are often heard against their inverted iterations, and also appear in fragmentary form with altered rhythms and shifting registrations.

Stylistically and harmonically, the piece is indebted greatly to works in Trifonov’s performing repertoire of the last few seasons, and is of a distinctly Russian idiom, spanning the development of the Russian Concerto tradition. There are clear references to Prokofiev’s Second and Third Concertos, as well as to the Rachmaninoff First and Fourth. Hints of Scriabin, Medtner, and Khachaturian also pervade.

Nevertheless, the episodic work succeeds in finding an idiom all its own, with rapid and kaleidoscopic shifts of musical imagery, with orchestral interjections ranging from lyrically supportive to brutally harrowing—the coda to the first movement reaches nearly the limit of the decibel spectrum on top of a trill shared by the pianist, piccolo, and castanets.

The orchestral writing already shows moments of considerable skill, with complex groupings of woodwinds, as well as interplay of sonorities matched between flutes and the piano soloist. The dreamy e minor second subject in the first movement assumes a narrative spell similar to those of Prokofiev’s fairy tales, archaic and bewitching in nature—and provides welcome lyrical relief to the harrowing culminations of emotion throughout most of the rest of the piece, including the second movement.

A striking moment, compositionally and atmospherically, occurs in the middle of the first movement, after a solemn modal chorale is interrupted with sudden turbulence: an episode of otherworldly beauty in the piano part introduces what will later prove to be the material for the coda of the final movement, and is hallucinatory, nostalgic, and melancholic.

The tranquility of the chorale, one of the piece’s very few moments of repose, does not last, but is quickly inverted in construction and assumes a demonic and quicksilver lightness also present in the finale. Some of the piece’s episodes are clearly programmatic and depictive in nature, and created a climate of sorcery and mystery on Wednesday evening. 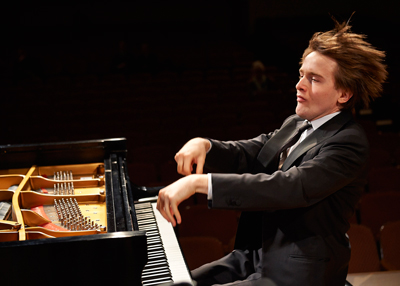 Trifonov’s performance was white-hot with almost continuous escalations of virtuosity that seemed to require more than was possible from a piano (he often nearly stood off the bench to apply full body weight), but his facility at the piano provided an ample display of his powers. His performance spared no passion or intensity, and was often almost frantic in its desire to express through intense energy to match.

The CIM Orchestra, skillfully led by CIM president Joel Smirnoff, was in top form, having been rigorously rehearsed to meet the many challenges, and highlighted the talents of many soloists. Particularly memorable was concertmaster Victor Beyens, whose playing spellbinding and seductive in the third movement waltz—music by turns hedonistic and sarcastic, and momentarily reminiscent of Richard Strauss.

The orchestral playing achieved an intimate and polished sheen in the opening work, Liadov’s Enchanted Lake.Virtuosic command followed in the Bartók Hungarian Sketches and in the “Polacca” from Tchaikovsky’s Sleeping Beauty.

Whether this new piano concerto will enter the central performing repertory around the world remains to be seen, as does the direction of Trifonov’s development as a composer. Little doubt was left to his range in every capacity with the two encores he offered—the first movement of his Rachmaniniana Suite of 2010, and the third movement Scherzo from his Piano Sonata (2013). Certainly the audience in Cleveland—assembled from around the world—and the excitement of the occasion attested to a unique moment of creation, rare in its reach and power.

Jackson began the program with a recitation of Langston Hughes’ poem “Helen Keller” — the first of five poems by Hughes that served as interludes between each piece on the first half. END_OF_DOCUMENT_TOKEN_TO_BE_REPLACED

Pianos with pins and tape on strings, a bass drum and tam tam, crotales, Almglocken, and vibes. Microphones were hooked up all around the instruments. The feed was sent to speakers around the room. Lighting designer Nicholas Houfek hung incandescent globes over the arrangement of instruments from thin black wires stretching across the beams. END_OF_DOCUMENT_TOKEN_TO_BE_REPLACED

From the podium, Elim Chan set an ambitious tone for the evening. The rising star conductor, here in her Cleveland Orchestra debut, has a commanding style, and every twist and turn in Saturday’s performance tracked closely with her baton. END_OF_DOCUMENT_TOKEN_TO_BE_REPLACED