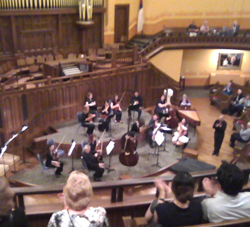 Short symphonies by Michael Haydn, his older brother Joseph Haydn, and J.S. Bach’s youngest son, Johann Christian Bach, were the Rococo entries on the final concert of Akron Baroque Chamber Orchestra’s season on Thursday, May 16 under the direction of Guy Victor Bordo, but the 17-member professional ensemble, founded by Amy Barlowe, also recalled its central mission with a Vivaldi concerto starring the violin-bass duo of Amber and Maximilian Dimoff. (Amber is a member of Akron Baroque; her husband is principal bass of The Cleveland Orchestra).

Presented in the fine acoustical ambiance of the sanctuary of First Congregational Church with its elegant, wrap-around balcony, the 90-minute concert followed solidly in the tradition the ensemble has established: attractive and accessible music masterfully played on modern instruments with a nod to historical performance practice but without any self-conscious fussiness.

Michael Haydn’s Symphony No. 25 in G was prefaced like all the works on the program with short, pithy remarks by Bordo. As a youth browsing in record stores, he told us, he was always puzzled by boxed sets of Mozart symphonies with a gap between nos. 36 and 38. Aha! Turns out that when Mozart added an introduction to the younger’s Haydn’s piece, it was erroneously rebaptized as Mozart’s No. 37.

If you were unaware of that, it would be difficult to tell where the music traded hands. The piece is expressive, spirited and delightful, with a beautiful slow movement made special by Thomas Moore’s chaste oboe solos. For all three symphonies on Thursday’s program, the excellent oboes (Moore and Danna Sundet) and horns (Meghan Guegold and Lisa Christiansen) stood on platforms behind the first violins, giving them extra presence.

The violin section reseated itself for J.C. Bach’s Sinfonia in B-flat, op. 3, no. 4, a graceful, stately work with another elegant slow movement, this time featuring violins doubled by oboes over a pizzicato accompaniment in the lower strings and the buff stop on the harpsichord, stylishly played by First Congregational music director Valerie Thorson.

After intermission, the Dimoffs appeared front and center for Vivaldi’s Concerto in B-flat, RV 547, a work that follows that composer’s winning structural and compositional formulas but shows Vivaldi’s inventiveness in always making his music sound fresh and new on the surface. It also serves up some thorny challenges for the soloists, especially the bass, who played a repurposed cello part.

Laid-back yet energetic tempos and fine attention to dynamics gave the soloists room to breathe whether playing together or sequentially, and the two matched each other beautifully. The conductor stepped aside and let the soloists guide the lovely slow movement on their own. Amber Dimoff played splendidly in the opening Allegro and spun expressive lines in the slow movement. The bulky double bass was lithe and supple in Max Dimoff’s hands, and he lived up to Bordo’s introduction (“one of the best bass players in the country”) in the finale by adroitly negotiating some fiendishly high, fast passages.

The concert ended with Joseph Haydn’s Symphony No. 3 in G, dubbed “visionary” by Bordo. Oboe and horns played what resembled a cantus firmus over energetic string figures in the first movement and Haydn gave them ornate lines to play in the minuet. Strings had the solemn slow movement all to themselves and the playful yet fugal finale brought everyone back together in the kind of lean, clean playing that had made the entire evening so delightful.

Save the dates for Akron Baroque’s 2013-2014 concerts: November 14, February 2 and May 15 (at First Congregational except for February 2, which is part of the 5 @ 5 series at Westminster Presbyterian).

Published on ClevelandClassical.com May 17, 2013

It might seem that there’s not a lot left to discover after three decades of experience with the Red Priest’s charming and evocative score, but this performance boasted a secret weapon: the young Spanish violinist Francisco Fullana, now the Orchestra’s artist-in-residence, whose affecting personality and easy virtuosity raised the solo part a quantum leap above the merely extraordinary. END_OF_DOCUMENT_TOKEN_TO_BE_REPLACED

END_OF_DOCUMENT_TOKEN_TO_BE_REPLACED

The Cleveland Orchestra’s second performance of the new season on Sunday afternoon, October 17 at the newly renamed Mandel Hall at Severance Music Center was just such an occasion. If the ensemble’s return to public concerts under the baton of Franz Welser-Möst wasn’t enough reason to light a bonfire, the Cleveland debut of a new work written for one of the Orchestra’s most popular soloists, and the swan song of one of its longest-serving members added extra fuel to the celebration. END_OF_DOCUMENT_TOKEN_TO_BE_REPLACED