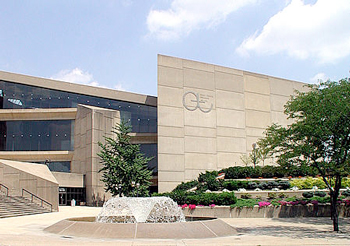 There were no speeches on Saturday evening when Christopher Wilkins and the Akron Symphony celebrated the fortieth anniversary of E.J. Thomas Hall, just plenty of rich orchestral sound, cleverly designed to make a dry acoustical space ring with festive sonority.

Canny programming added to the celebratory nature of the evening. Brahms’s Academic Festival Overture (led by UA’s Guy Victor Bordo) contributed a sense of gravitas to a joint observance between the ASO and the University of Akron, and UA composer Nikola Resanovic’s infectious clarinet concerto provided bubbles for the anniversary toast. Richard Strauss’s brilliant orchestral tone poem (and monumental tribute to himself), Ein Heldenleben, gave the orchestra an opportunity to show itself off, something it did unabashedly and to brilliant effect.

One big factor in pulling this celebration off so successfully was Wilkins’s decision to fill out the string sections for the occasion, and to elevate winds and brass on a series of risers to better equalize balances and projection. That ploy worked well. For the first time these ears can remember, the orchestra’s sound had a warm, vibrant presence in the hall from the very first notes of the Brahms.

After UA orchestra director and Akron Baroque artistic director Guy Victor Bordo opened the concert with a solid, vigorous reading of the Brahms overture, UA faculty clarinetist Kristina Belisle Jones stole the rest of the first half of the show with a spirited journey through Resanovic’s concerto, which bears the subtitle “Collateral Damage.”

Though there is a deep layer of melancholy running below the surface — the piece is dedicated to the civilian victims of all modern wars and was inspired “largely by the tragic events surrounding the break-up of the former Yugoslavia during the 1990s,” Resanovic’s piece also springs from late twentieth-century pop music and the defiant responses of Serbians who sang and danced on bridges during the bombing raids of 1999.

Resanovic’s orchestration is brash and colorful, full of intrusions by percussion and brass, but Jones carried clear and strong over the noisiest goings on behind her. The last movement, Serbian Hoedown (The bombs fly but the band plays on) was a breathless romp which Jones crowned with some impossibly accurate high notes after a spate of digital virtuosity. In an orchestration full of interesting effects, the trombone section sounded especially fine.

Conducting without score, Christopher Wilkins presided over a sonically thrilling journey through “A Hero’s Life”. While the whole orchestra and all of its individual sections covered themselves in glory, the chattering winds (the music critics), concertmaster Alan Bodman (the hero’s companion), English hornist Daniel Rios (the hero’s retreat), the horn section (throughout) and the brass (flawless) made particularly noteworthy contributions. At the end, when the audience finally exhaled, Wilkins acknowledged dozens of individuals with standup bows.