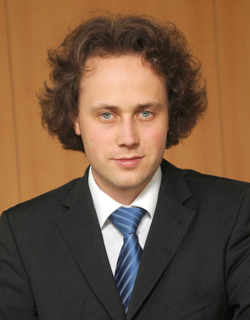 pianist Alexander Schimpf performed with a Northeast Ohio orchestra under the baton of Christopher Wilkins for the second time in two years on Saturday evening. His first appearance on August 6, 2011 — with The Cleveland Orchestra in Beethoven’s fourth concerto — won him top prize in the Cleveland International Piano Competition. His second collaboration came as part of that prize package — a series of bookings with orchestras — as he returned to be the featured soloist in Chopin’s first concerto with the Akron Symphony at E.J. Thomas Hall.

It was clear from the contingent of Cleveland fans who drove down to hear Schimpf that the Cleveland Competition continues to support its laureates not only with post-contest bookings but with enthusiastic moral support. On Saturday, both Akron and Cleveland listeners were obviously thrilled by Schimpf’s gorgeously assured performance of a work the pianist has lived with for more than a decade: Chopin No. 1 was the first work he ever played with an orchestra, at the age of 18.

Schimpf’s approach to the concerto, actually the later of the two that Chopin wrote for himself, was both muscular and glitteringly transparent. After nicking a single key in his opening statement, he went on to play with total accuracy and sureness of touch, now becoming the virtuoso soloist, now blending into the orchestral fabric and always engaging in intimate conversations with the solo winds. His cadenzas were sparkling but not diaphanous, beautifully voiced even in the quietest sections.

Though attentive, Wilkins and the orchestra were sometimes sluggish when Schimpf wanted to press forward, and missed several opportunities to engage with him in real chamber music dialogue. The pianist’s impressive performance won him multiple callbacks and won more Chopin for the audience. As an encore, Schimpf offered up the lovely Nocturne in D-flat, sensitively paced and phrased by this very thoughtful musician. Tuesday Musical Association’s new “Three Graces” Steinway, graciously loaned to the Akron Symphony for occasions like this, sounded splendid.

Saturday’s program began with Debussy’s Prelude to the Afternoon of a Faun, led by assistant conductor Levi Hammer, and ended with excerpts from Prokofiev’s Romeo and Juiliet ballet suites, led by Christopher Wilkins.

Hammer’s conducting was fastidious, bringing out inner details in the orchestration sometimes at the expense of sensuality and the grand sweep of musical phrases. Principal flutist Sandy Hugues was first among equals in an excellent group of wind soloists, and the ASO strings provided them a lovely cushion of tone to play against.

Wilkins drew exciting, dramatic, colorful playing out of the orchestra in Romeo and Juliet as the story unfolded, beginning with the feuding families, and continuing with a portrait of Juliet as a child, the famous Balcony Scene, the dance of the Five Couples, the death of Tybalt and the two final scenes, Romeo at Juliet’s before parting and Romeo at the Grave of Juliet.

Though some balances went astray, the Akron Symphony contributed admirable playing to the narrative of the star-crossed lovers. Wilkins gave every section its own stand-up at the end, but clarinetist Kristina Belisle Jones and violist Rimbo Wong earned recognition for particularly fine solo work.

The cimbalom was the feature of the show, an instrument capable of taking on many personas. Its performer, Chester Englander, has shaped his career around the instrument, and has inspired composers to write more repertoire for it, some of which was presented on the program. END_OF_DOCUMENT_TOKEN_TO_BE_REPLACED

You wouldn’t expect that acoustic from a glance at the nave, which is wide and long, but not especially lofty. But when I guest conducted a local amateur choir and professional orchestra in Beethoven’s Mass in C there a few years back, during the first rehearsal we released the final chord of the “Gloria” and listened in astonishment for the next several seconds. The sound continued to roll down the space like the big wave that surfers dream about. END_OF_DOCUMENT_TOKEN_TO_BE_REPLACED