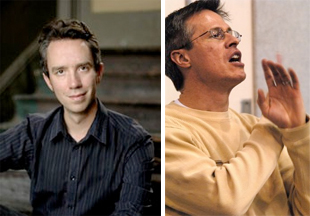 The Turn of the Screw (1954) is based on Henry James’s novella of the same name, and relates a series of episodes in the career of a young governess supervising two children, a boy and a girl, in a remote English house, with the assistance of a housekeeper. The Governess comes to believe that the house is haunted by two former servants, Peter Quint, a valet, and Miss Jessel, the previous governess, both of whom died in mysterious circumstances. The ghosts may be preying upon the innocent children, Miles and Flora.

In James’s story, the existence of the ghosts is highly ambiguous; they may be the figment of the Governess’s increasingly hysterical and deranged mind. Britten considered the ghosts real, with the Governess fighting a battle of good and evil. In the end the Governess prevails over Peter Quint by goading Miles into denouncing the ghost. Through Miles’s cry of “Peter Quint, you devil,” the governess wins, but at the cost of Miles’s life. The opera’s haunting conclusion has the Governess singing, “What have we done between us?” while clutching Miles’s body.

BW’s production is presented in a “black box” theater, with minimal scenery designed by Laura Carlson Tarantowski: a two-story windowed facade opening into a parlor in the house, and a series of multi-level black platforms that became various locales: the shore of a lake; the garden outside the house; a school room; the church yard; Miles’s bedroom. The theater is has a narrow walkway high up which the director used effectively for various appearances of the ghosts. With a few pieces of furniture and lighting effects, our imaginations were persuaded.

Britten’s opera is almost cinematic in its flow of one scene to the next, with orchestral variations between the scenes. The orchestra sits along one side of the theater stage right. The cast can watch the conductor on several video monitors. The arrangement worked fairly well, although sometimes it appeared that the singers were having trouble hearing the chamber-size orchestra. Britten’s writing is spare; often the singers are accompanied by only an instrument or two. There is no hiding behind a lush orchestral texture.

The student cast was well prepared and gave a convincing performance of Britten’s tricky music. As the Governess, soprano Antoinette Vargo started tentatively but gained confidence as the evening progressed and the Governess became ever more hysterical. The housekeeper, Mrs. Grose, was sung by Grace Olmsted, whose lovely lyric soprano voice does not yet have the depth to convincingly portray the much older woman. (The costume designer and makeup artist might have helped make this Mrs. Grose look older, even if she didn’t sound older.) Ms. Olmsted was effective in showing Mrs. Grose’s simple-minded chattering, not understanding, but willing to go along with what may be the Governess’s hallucinations.

Tenor Max Nolin was menacing as Peter Quint and managed creditably the many difficult coloratura passages which Britten wrote especially for his life and professional partner, Peter Pears. Aubrey Johansen was the ghostly former governess, Miss Jessel, used, then spurned by Peter Quint. Ms. Johansen’s acting effectively caught the vaporous dignity of the ghost; her singing, although quite accurate, did not reveal Miss Jessel’s pathetic character — she seemed to be floating on the surface of the part. The part of Miss Jessel is for a rather low soprano, and it seemed that much of it lay in an uncomfortable part of Ms. Johansen’s range.

The girl Flora was sung by Bree Horton, who captured Flora’s impish character at the beginning of the opera, but later portrayed a much more deeply disturbed child abused by the ghosts, as well as hectored by her current caretaker. The part of Miles, written for a boy soprano, was taken by young female soprano Erica Moffatté, in an outstanding performance of both difficult music as well as a challenging acting assignment. She was convincing as the headstrong Miles, both in looks and in voice. Tenor Patrick Hyzy sang the short role of the Prologue, who sets up the whole story.

This production is well worth the time and effort to see if you can get in. It is one of Britten’s greatest and most tightly composed operas. The Baldwin Wallace performers and producers are to be congratulated.