It’s a vocally demanding work that calls for experienced singers, but it’s frequently mounted by university and conservatory opera departments who have a bumper crop of women’s voices to cast (Hansel is routinely performed as a trouser role). It calls for a large orchestra — which can cause balance problems against younger singers.

BW opera director Benjamin Wayne Smith found himself blessed with such a plenitude of women’s voices this year, and decided to take profit of that by staging Hansel and Gretel. He made some wise choices on the way to the John Patrick Theatre stage.

By conceiving the production as a fairy tale, he lets the audience find what they will in the story, whether they’re children enjoying exactly what they see or adults who are susceptible to subtle undercurrents. Together with set designer Laura Carlson Tarantowski, he envisioned a luscious scenario which evokes the natural qualities of a German romantic forest but is playful enough in its color scheme to become fantastical.

By restricting all the action to a sixteen-foot square, raked platform, he focuses the drama into an intimate space on the theatre’s wide stage. And working with guest music director Dean Williamson, Smith decided to use a reduced orchestration that suited the available pit space and gave the young singers a better chance at being heard. 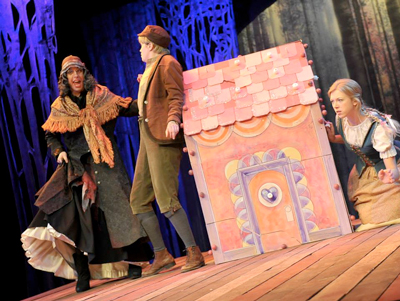 All of this resulted in a visually beautiful, vibrantly acted and musically satisfying production that revealed only a few opening night jitters on Thursday, February 20.

The show is double cast. Thursday’s Hansel and Gretel, Grace Olmsted and Katie Staskus, were convincing as gently warring siblings. Their attractive singing and good diction (the libretto is in English) carried clearly into the house. Rayna Brooks as Gertrude the Mother (she plays the Witch on alternate nights) and Joe Ziegler as Peter the Father, were vocally and physically compelling in their roles as older characters, though Ziegler was sometimes out of sync with conductor and orchestra. As the Dew Fairy, Sarah Nadler made the most of her cameo vocal appearance. But it was tenor Cory Svette as the Witch, who stole the show after intermission with his maniacal cackling, outrageous vocalizations and over-the-top acting. 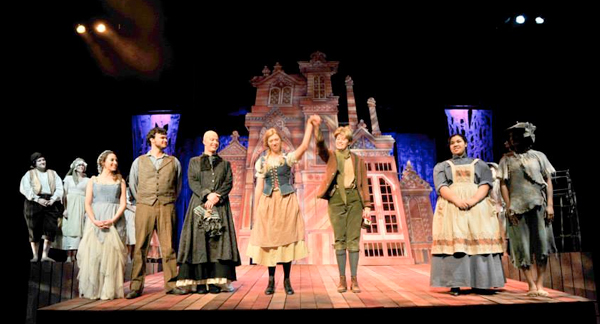 Charlene Gross’s period costumes, Jeff Herrmann’s imaginative lighting and Laura Carlson Tarantowski’s whimsical set pieces (who knew that the gingerbread house was a play house?) contributed to the magical tone of the production. Amy McKenney’s nicely choreographed chorus came into play at more than one point and added texture and striking lighting details to the show, not to mention splendid singing in the finale.

Dean Williamson did a fine job of holding the musical threads of the opera together and drew some impressive playing from the 34-piece orchestra. There were laudable moments of fine blend from horns, bassoons and the whole wind section. Some dicey passages in the strings should take care of themselves as the performances settle in.

Hansel and Gretel continues at the Kleist Drama Center in Berea on Friday and Saturday at 7:30 pm and on Sunday at 2:00 pm. Operagoers 18 and under get in free with the purchase of an adult ticket.

END_OF_DOCUMENT_TOKEN_TO_BE_REPLACED

The strings-only work by Berg has made relatively frequent appearances on the Orchestra’s programs. In 2021, the musicians recorded it for the In Focus series, and it appeared again on last year’s European tour. Friday’s rendition maintained the group’s characteristic light and effortless playing, each section blending as much as possible to echo the work’s original form as a string quartet. At fifteen minutes total, the piece is quite short, but the dense encoded musical meanings require some extra-attentive listening. Splitting up the three movements ensured that each one could be appreciated on its own. END_OF_DOCUMENT_TOKEN_TO_BE_REPLACED