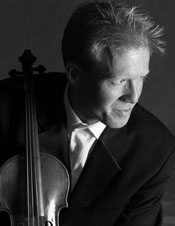 Iron Composer is an instant composition contest held at Baldwin Wallace. Five composers are invited to compete in person. On the morning of the event, the finalists are assigned an instrumentation and a secret musical ingredient. They have just five hours to write a piece of music that incorporates those two elements. Their work is then performed and judged on a public concert that same evening. Blue Water Chamber Orchestra and the Iron Composer Competition have a collaborative venture in which works by competition winners are given a performance on its regular concert series.

Polaczyk’s Around The Blue-S, written to fit the instrumentation of BWCO for this concert, opened the program. A musical palette of blues colors is explored as space, sound and speech is conjured by the music. Wielding a blue toy trumpet in place of a baton, Woods led the ensemble through the Intro and eight Processions beginning with a trumpet player making a series of unconventional breathy sounds as he slowly strolled around the perimeter of the balcony. Joined by unusual flutterings and tinklings by the woodwinds and percussion, they continued producing pitchless, hollow sounds to great effect in addition to conventional playing as the strings utilized many bow techniques for sustained tones and sharp, disjointed sounds.

Toward the end of the piece, several players slowly left their chairs and ascended the stairs to the balcony while clinking glass bowls. In the final moments, a drummer slowly walked offstage, disappearing through a door while the trumpet wailed a final bluesy plaint.

Plymouth Church’s acoustics enhanced the readings of On Hearing the First Cuckoo in Spring and Summer Night on the River, two tone poems by Delius. The ensemble swelled and subsided as they produced luminous sonorities in this highly evocative, idyllic music. The performance sounded especially full and rich following the Polaczyk.

Kenneth Johnston was the champion of the night as soloist in Beethoven’s beloved Violin Concerto. Making the most of the work’s nobility and poetry, his tone was intensely radiant in the highest register, and lyrical with a lovely dolce quality during the moments of capriciousness. His rhythmic stability was splendid; quarter notes, eighth notes, triplets and sixteenth notes were clearly discerned and meticulously observed as each took on different interpretive characteristics.

The orchestra was in top form. Woods conducted with great authority with attention given to every detail and nuance. Tuttis were arrestingly powerful and sustained cushions of sound in the quieter sections were sublime as the ensemble supported the soloist throughout. This performance left nothing to be desired, and the audience showed their appreciation with a rousing ovation.

Published on ClevelandClassical.com May 13, 2014.

Supported by engagingly, yet simple staging by Cara Consilvio, a well-prepared cast of singers told the archetypal story of Cinderella with charm and flair. Framing the production was  a sparse but colorful set and wonderful lighting by Dave Brooks. END_OF_DOCUMENT_TOKEN_TO_BE_REPLACED

END_OF_DOCUMENT_TOKEN_TO_BE_REPLACED

The music isn’t easy to play, either. Over the course of two hours, all of the musicians brought fantastic focus to the unrelenting tricky rhythms and countless layers of parts, all of which require a high level of individual responsibility. Even in the moments of calm, the accompaniment remains perpetually unsettled. Adams — who made a sprightly presence on the podium — combines minimalist, repeating motives in gradual layers, which eventually become so dense they overwhelm the senses. Lisa Wong deserves special mention for her thorough preparation of the Cleveland Orchestra Chorus, as does Jennifer Rozsa for the Children’s Chorus, which made a brief but memorable appearance in the last few minutes. END_OF_DOCUMENT_TOKEN_TO_BE_REPLACED