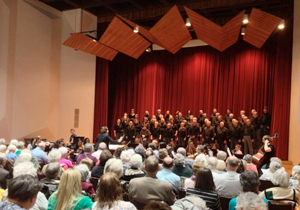 The Canton Symphony Orchestra “casual series” concerts presented in Cable Recital Hall are generally chamber music affairs featuring small instrumental ensembles – duos, trios, quartets or quintets. For scaled-down concerts of this sort, the acoustics in this modest hall, which can seat an audience of approximately 140 listeners, are more than suitable.

So the first surprise about the concert on March 15 was that it featured a full chamber orchestra – some 30 pieces – as well as the superb 53-member Canton Symphony Chorus. One might have reasonably anticipated a sound far too deafening for this intimate venue. Surprise number two: Orchestra and chorus, both separately and together, delivered a deeply satisfying aural experience that was clear and balanced in every way.

The program consisted of five works, four of them by living composers. Each of the selections was part of a thematic arc, described by CSO assistant conductor Rachel Waddell (who shared the podium on this occasion with Britt Cooper, Canton Symphony Chorus director) as a journey through water, earth, and sky. The first piece of the evening was La Tempesta di Mare (Storm at Sea), an overture by Antonio Salieri. While this work is not a gripping evocation of an aquatic adventure as suggested by the title, the orchestra was nonetheless captivating if not a little understated in its rendering of lush, graceful textures.

Following this charming work were two brief a cappella choral pieces conducted by Mr. Cooper: Water Night by Eric Whitacre, and At the Round Earth’s Imagined Corners by Williametta Spencer. The text for Water Night is the eponymous poem by Octavio Paz. Whitacre’s tantalizing and voluptuous music is replete with haunting, achingly sensual crescendos and harmonies at once medieval and modern. The mystical imagery of the last line lingers with a preternatural resonance: “Night brings its wetness to beaches in your soul.”

No less resonant is the spirituality of the Spencer work, a full quotation of John Donne’s Holy Sonnet VII. From the initially exuberant call to angels at the last judgment, to the humility of the repentant sinner at the end, the song is startlingly triumphant. The chorus infused both works with all the subtle, poignant tonal expressivity and dramatic sonority that their poetic content demands.

Waddell returned to the podium for the evening’s fourth selection, the world premiere of a single movement orchestral work called Lacuna, by Matt Smith. This contemporary composition, as Waddell carefully noted to the audience, is a thoroughly challenging departure from traditional Western classical structures.

It is indeed a rocky journey — a complex sound tapestry threaded through and through with frenetic dissonances, wildly shifting moods, and colliding textures. Call it an exotic and otherwise atmospheric flow of consciousness, performed here with riveting intensity. There is in this work a relentless sense of quickly traversing difficult, forbidding terrain, and its placement in the program order was an eerie yet apropos portal into distinctly more beatific heights attained in the evening’s final piece or, if you will, final peace.

Orchestra and chorus offered up a stunning performance of Morten Lauridsen’s brilliant, modern requiem, Lux Aeterna (Eternal Light), which was quite literally soul-stirring. Herein there is no hint of torturous, guilt-ridden sorrow. It is a majestic work, purposed by joyous hope and powerfully enunciated by inspired choral voices. Our attentions were transported to angelic realms immersed in a light that can only be called Divine.

In his introduction of the work, Cooper described it as “…a catharsis to sing.” He hoped it would similarly affect the audience. In the end, his hopes were realized. The audience was elated. And even the angels were jealous.