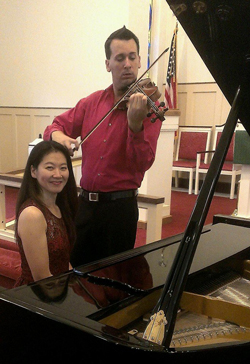 Violinist Andrew Sords and pianist Eriko Izumida opened the 2013/14 Chagrin Valley Chamber Music Concert Series with a brilliant recital at Valley Lutheran Church in Chagrin Falls this past Sunday afternoon. Works by Elgar, Bartók, Piazzolla and Hubay received splendid readings by the duo, who have collaborated numerous times throughout the area and abroad.

Sords delivered the opening Allegro of Elgar’s Sonata, Op. 82, assertively, with drama and passion, and transitioned beautifully into the introspective, lyrical sections with the assistance of sensitive and expert playing by Izumida. Both matched subtle tone colors and expressive inflections.

Elgar dedicated this sonata to a family friend, Marie Joshua, and wrote to her: “I fear it does not carry us any further but it is full of golden sounds and I like it, but you must not expect anything violently chromatic or cubist.”

Sords gave the Andante an improvisatory feel with long, lyrical lines at first, contrasting that with some jaunty phrases and harmonic surprises later. He played with a deep, penetrating tone before launching into the playful and rhythmic Allegro, non troppo finale. The duo’s repeating of poignant, sequential phrases toward the closing of this movement conveyed a sense of affirmation. Elgar quotes the dolcissimo melody from the slow movement just before the coda of this final movement as a tribute to Marie Joshua, who died four days after receiving his letter. One wonders why this sonata, brimming with beauty and deep emotion, never had a reputation of one of Elgar’s great works.

Originally written for flute and guitar, Piazzolla’s Histoire du Tango conveys the history and evolution of the tango in four movements: Bordel – 1900, Cafe -1930, Nightclub -1960 and Concert d’aujourd’hui. The pianist echoed the violinist’s phrases by coyly tapping out rhythms on the piano case in the light opening piece, played with grace and a feeling of high spirits. The mood became dark and brooding in the second piece, then an optimistic, lighter section contrasted before settling back again into the dark mood.

The third piece was rhythmic and melodramatic, then melted into a sentimental, reflective section before returning to the rhythmic character of the beginning. The most adventurous and modern of the set, the last piece reflected the influence of Bartók, Stravinsky and other composers. It was obvious that both Sords and Izumida relished in this set of colorful and entertaining tangos as they conveyed the composer’s depictions of many moods and scenes.

The Carmen Fantaisie Brillante, Op. 3 by Hubay, unlike the more familiar Carmen Fantasy by Sarasate, is “a relatively unknown work which includes a greater amount of thematic material from the opera by Bizet than Sarasate’s,” Sords said in his spoken program notes. It proved to be a brilliant, virtuosic showpiece. Sords impressed with his total command of technique, consummate musicianship and bravura as he tossed off scads of notes and sang out like a diva in this operatic tour du force. Firm and colorful support by Izumida enhanced the performance.

Sords and Izumida had the enthusiastic and appreciative audience in the palms of their hands all afternoon and the duo rewarded them with two encores:the etude-like Souvenir d’Amerique, Op. 17 (Yankee Doodle) by Vieuxtemps, and Leroy Anderson’s Plink, Plank, Plunk!, “played pizzicato without the bow because my bowing hand is too tired after all this playing,” Sords quipped.

Over the past few years, Brian Giebler has visited Northeast Ohio in settings both orchestral and choral, and with repertoire as diverse as Stravinsky, Bach, and the local premiere of a new work. In his impressive solo recording debut a lad’s love, released on Bridge Records, the New York City-based tenor turns his focus to British songs from the first half of the 20th century — a mix of cycles and individual works — and tops off the playlist with a touch of the modern. END_OF_DOCUMENT_TOKEN_TO_BE_REPLACED

To steal a phrase from the third-century Greek philosopher Sextus Empiricus, the mills of the gods grind slowly, but they grind exceedingly fine. The same goes for Deutsche Grammophon. It’s been a dozen years since they were recorded in Hamburg in 2009, but the German company has now issued fifteen Rachmaninoff piano pieces magnificently and poetically played by Sergei Babayan. END_OF_DOCUMENT_TOKEN_TO_BE_REPLACED

END_OF_DOCUMENT_TOKEN_TO_BE_REPLACED

After considering all its options, Cleveland’s period ensemble Les Délices decided to fully embrace the idea of creating pre-recorded “shows” in the place of live, in-person performances this season. END_OF_DOCUMENT_TOKEN_TO_BE_REPLACED

END_OF_DOCUMENT_TOKEN_TO_BE_REPLACED

For those who crave coherence in a concert, consistent instrumentation can help. For those who want a sense of progression, starting with shorter or older pieces and moving toward more extended or contemporary works makes for a sound strategy. Those who value both would love the sort of program that Idaho’s Sun Valley Music Festival assembled for its recent program Strings and Mallets on Tuesday, August 4. Although produced under the Sun Valley banner, the performances were recorded remotely in several locations. END_OF_DOCUMENT_TOKEN_TO_BE_REPLACED