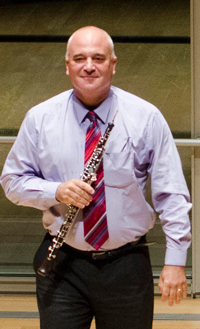 “Today’s magic word is context. It’s the most important word in chamber music,” Klein told the crowd following a splendid performance of the opening movement of Kodaly’s Serenade performed by Diana Cohen and David Bowlin, violins, and violist Yura Lee.

Then came Xenakis’s Kottos for Solo Cello. Klein brilliantly introduced the work by explaining that sometimes first impressions can be wrong, which he demonstrated with a happy face mask that when removed revealed his own scowling face. He went on to explain that in Greek mythology, Kottos was a fifty-headed giant who controlled violent events of nature. Following a abbreviated but terrific performance by Julie Albers, Klein asked, “was that a happy or sad piece?” And, as one would expect, the group could not come to an agreement.

Berio’s Sequenzas are for many, an acquired taste. And since I happen to love them, it was interesting to see how Alex Klein introduced No. VII for solo oboe. The work incorporates a drone pitched on middle B which Albers to remained on stage to play. Klein then asked the audience to join her in humming the note. Picking up his oboe, he said, “This is an experimental work, so let’s just have some fun.” Klein performed the work with panache, and wisely chose to end the piece before the fun wore off.

The program concluded with selections from Bach’s Goldberg Variations arranged for string trio. Violinist Amy Schwartz Moretti, violist Dimitri Murrath and cellist Gabriel Cabezas beautifully performed the opening aria followed a short selection of variations that were interspersed with brief conversations between Klein and the performers.

What did everyone learn Saturday morning? Who knows! And although I’m fairly certain people didn’t rush home to read the biographies of Berio and Xenakis, it was great to see a musician like Alex Klein not shy away from presenting some fairly heady music in the context of a family concert. No pre-approved educational scripts needed. Just an abundance of enthusiasm and the ability to know when to move on to the next piece. But after all, working with young people is his passion.