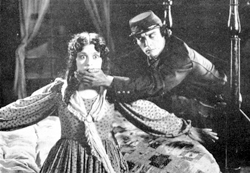 ChamberFest Cleveland again presented Movie Night — back by popular demand — for their second season as part of this year’s 10-day schedule of creative programs on Thursday, June 27 at The Cedar Lee Theatre, followed by a cabaret-style concert by ChamberFest artists at The Wine Spot.

Israeli-born pianist and composer Matan Porat, a ChamberFest artist, improvised on piano during the 1926 silent film, The General, written and directed by Buster Keaton and Clyde Bruckman and based on Daring & Suffering: A History of the Great Train Adventure by William Pittenger. ChamberFest’s Artistic Director Franklin Cohen said in his brief welcoming remarks that Porat “had no idea what he was going to play” during the screening. But Porat obviously had an arsenal of material up his sleeves, improvising non-stop for the entire 75-minute duration of the film. Whether intended or not, I detected the musical and stylistic influences of several different composers including Prokofiev, Hindemith, Wagner, Stravinsky and even Beethoven.

Melodic themes were established and repeated for certain characters and situations as was a myriad of exciting mood-setting and scene-defining interludes. I presume that this was all rather reactionary and in-the-moment as the pianist watched the events unfold on screen. Porat’s formidable piano technique and his abilities as a composer were very apparent, making for an extremely enjoyable and successful performance.

Immediately following the film and after taking a short walk up the street to The Wine Spot, the second half of the evening’s musical events continued with wine tasting and a selection of finger food. Violinist Amy Schwartz Moretti and percussionist Steve Moretti began the informal cabaret-style performance with movements from Djembach by Christian Woehr, each prefaced by a poem read by violinist Moretti. Percussionist Moretti played the djembe, an African hand drum, creating a vast array of rhythmic and surprisingly expressive sounds to mesh with the violinist’s inspired and dynamic playing. Together they performed with style and gusto, full of subtle nuance and excitement.

Hopefully the tradition will continue and Movie Night will be included on the schedule of future ChamberFest Cleveland seasons.

Jackson began the program with a recitation of Langston Hughes’ poem “Helen Keller” — the first of five poems by Hughes that served as interludes between each piece on the first half. END_OF_DOCUMENT_TOKEN_TO_BE_REPLACED

Pianos with pins and tape on strings, a bass drum and tam tam, crotales, Almglocken, and vibes. Microphones were hooked up all around the instruments. The feed was sent to speakers around the room. Lighting designer Nicholas Houfek hung incandescent globes over the arrangement of instruments from thin black wires stretching across the beams. END_OF_DOCUMENT_TOKEN_TO_BE_REPLACED

From the podium, Elim Chan set an ambitious tone for the evening. The rising star conductor, here in her Cleveland Orchestra debut, has a commanding style, and every twist and turn in Saturday’s performance tracked closely with her baton. END_OF_DOCUMENT_TOKEN_TO_BE_REPLACED