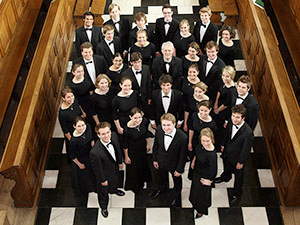 In recent years, the choir of Clare has distinguished itself musically, benefitting from its close association with Clare alumnus and former choir director John Rutter. Clare’s choir is composed entirely of undergraduates, a fact that sets it apart from the tradition of choirs of men and boys. In place of the vocal purity of boy treble voices, the fuller harmonics of women singers makes for a more coherent choral sound and a broader range of dynamics and tonal qualities, qualities that were in evidence in this performance.

Moreover, the Clare choir, being composed entirely of undergraduates, has a collegiate energy, even rambunctiousness, that tends to be damped down in the men-and-boy choirs. The choir tends to sing with urgency and excitement, often (appropriately) at a higher dynamic level than we might expect of an Anglican choir. Just occasionally, a rising line would be taken too loudly.

The program, conducted and introduced by director Graham Ross, was organized around the familiar Advent hymn, “O come, O come, Emmanuel,” which itself derives from liturgical prayers for the days leading up to Christmas. The hymn bracketed the evening, first in Latin and at the end in English, sung with audience participation.

As we might expect from an English choir, there were motets from the English Renaissance – most notably, William Byrd’s familiar Vigilate with its evocation of the crowing of a cock (in Latin, wonderfully, “an gallicantu”!). The choir’s rendition was urgent, an unabashed forte warning us all to “watch” for the coming of the Lord.

The majority of the works in this inventive program were from the 20th and 21st centuries, including three by the English composer Herbert Howells, dearly beloved of Anglican liturgies. A Hymn to the Virgin by the 16-year-old Benjamin Britten featured a quartet of soloists in the organ loft as an echo effect. Elizabeth Poston’s tuneful setting of Jesus Christ the Apple Tree was sung with impeccable diction and unforced grace.

The most startling, and in many ways the most satisfying, was an ambitious piece by the English baritone Roderick Williams, on the text “O Adonai, et dux domus Israel.” For this difficult work, the lower voices of the choir positioned themselves around the nave, while the sopranos sang from above in the organ loft (including a fine solo by Cleveland native and choir member Gabrielle Haigh). Williams’ intense prayer evoked the god of Moses and the burning bush with mysteriously dissonant intervals, sometimes in hushed tones of fear, at other times in urgent imprecations. It was a virtuoso performance that showed the skill and courage of these young singers at their best.

From the Estonian Arvo Pärt came a quietly polytonal meditation on the morning star (O Morgenstern), and from Peter Warlock a melodic and haunting evocation of the dark future of the Christ child (Bethlehem Down). A premiere by John Rutter (Christ is the morning star), commissioned this year by the Clare choir, would have been more appropriate for a village choir than for this musically sophisticated group.

God is with us, an ambitious anthem by the late John Tavener, brought the program to an end. It had a distinctively contemporary English cathedral sound, featuring big parallel chords in the choir, highly rhetorical text settings, and forceful dissonances in multiple ranks on the organ.

A section of Mendelssohn’s unfinished oratorio Christus, featuring a trio of male soloists representing the three wise men, brought a Romantic sound that seemed somewhat out of place amidst more striking contemporary repertoire. Here and in a few other pieces, the choir’s organ scholars appeared to be unfamiliar with Fairmount Presbyterian’s Schantz instrument, as some of the registrations were incompatible with the musical context. I am guessing that delays in the winter storm made it hard to test the stops in advance.

It is no small feat to mount an international choir tour of this dimension (seven stops in something like ten days, and coming just at the end of an intense university term!). Congratulations to Clare College for doing so, and to Fairmount Presbyterian for hosting them. A new CD with many of the pieces on the concert (“Veni Emmanuel: Music for Advent,” reviewed last week on ClevelandClassical) was selling well Saturday evening, and is available on iTunes.

Nicholas Jones is Professor of English at Oberlin College.

END_OF_DOCUMENT_TOKEN_TO_BE_REPLACED

Concerts cancelled in 2020 may have put a brief gap in Ling’s record with the Orchestra (a program every season since 1984-1985), but the ensemble’s former resident conductor more than made up for it Sunday with a performance both commanding and personal. END_OF_DOCUMENT_TOKEN_TO_BE_REPLACED