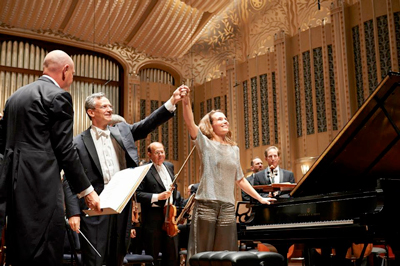 In a break with tradition, The Cleveland Orchestra has entrusted the first month of its new season to guest conductors. Presiding over opening night on Thursday, September 19, was Fabio Luisi, who took some time off from The Metropolitan Opera on Thanksgiving weekend of 2011 to make a thrilling debut at Severance Hall.

On that occasion, Luisi shaped impressive accounts of two Strauss tone poems and a Mozart concerto with pianist Jonathan Biss. On Thursday, he led a nuanced, characterful reading of Mahler’s fourth symphony and a regal performance of Beethoven’s fifth piano concerto with his frequent collaborator, pianist Hélène Grimaud. (For the Fridays @ 7 concert on Friday, Luisi swapped Mahler out for Schumann’s first symphony, returning to the original program for his third concert on Saturday).

Luisi and the orchestra set the tone for Beethoven’s “Emperor” Concerto with a grandly symphonic introduction. In her first entrance, Hélène Grimaud nearly matched them in power and brilliance. The French-born pianist likes to be original in details of interpretation, and there were surprising accents, emphases and articulations in her Beethoven. Her touch can become steely when she digs in, but Grimaud is a soloist who catches and holds your attention with playing as arresting as it is accurate.

The slow movement — Adagio — was hushed, timeless and exquisite, and at its end, Grimaud made an appealingly sneaky transition into a final Rondo lively with accents and catchy rhythms from pianist and orchestra alike. Her conversation with timpanist Paul Yancich toward the end was riveting in its intimacy.

Mahler’s eventful, childhood-inspired fourth symphony, with all of its turn-on-a-dime tempo changes and mood changes, showed what an easy rapport Fabio Luisi can establish with an ensemble in only a few rehearsals.

Marc Damoulakis’s cheerful bells (Schellen) — often called sleighbells but which Mahler is said to have envisioned as the bells on a jester’s cap (Schellenkappe) — announced the first movement and returned later to change the mood into something far more sinister. As the symphony unfolded, and other sunny scenes clouded over or sudden disaster struck, Luisi and the orchestra were malleable putty in Mahler’s hands.

Memorable details in the soundscape included four flutes playing in a golden unison, quipping bassoons and glorious horns (a bold statement then a long diminuendo). The finale, a poem about heaven from Des Knaben Wunderhorn laden with the curiously dark imagery that seems to creep into German children’s stories, was charmingly sung by soprano Maureen McKay, who managed to keep her clear voice shining out over the orchestra most of the time thanks to Luisi’s sure control of dynamics.

Another kind of bell chimed forth twice during the evening — before the Beethoven and again before the Mahler. It’s probably too draconian to frisk patrons for cell phones at the doors, but perhaps when ushers hand out programs they might plant a gentle reminder to turn those devices off. Or implement the threat that the Merkin Concert Hall in New York posted over its bar: “If your phone rings during the concert, you will be required to go on stage and play the bassoon” (sorry, guys!)

END_OF_DOCUMENT_TOKEN_TO_BE_REPLACED

Rodgers & Hammerstein’s Cinderella was originally produced for television in 1957 — seven years after the animated Disney film was released — and starred Julie Andrews. According to the Rodgers & Hammerstein website, it was viewed by over 100 million people. END_OF_DOCUMENT_TOKEN_TO_BE_REPLACED

The story line has its origin in an 1855 play and an 1842 farce that Thornton Wilder mined for his 1938 play The Merchant of Yonkers. When that turned out to be a flop, in 1954 Wilder made the crucial decision to re-center the show around the character of the legendary marriage broker Dolly Gallagher Levi and renamed it The Matchmaker. END_OF_DOCUMENT_TOKEN_TO_BE_REPLACED

The Dodero Center for the Performing Arts at the Gilmore Academy in Gates Mills is one feature of an impressive campus. The auditorium is shallow, the stage is deep, and the ensemble played without a shell. Throughout the program, the sound, especially in instruments’ lower registers, tended to disappear. END_OF_DOCUMENT_TOKEN_TO_BE_REPLACED