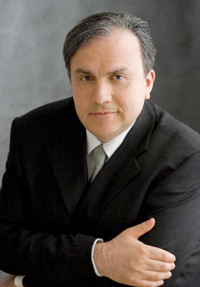 For the second of his January homestand weekends before the orchestra travels to Miami for its residency, Franz Welser-Möst gave Severance Hall audiences a Mozart symphony, a Beethoven piano concerto and the United States premiere of a substantial and brilliant new work that has been making the rounds of European and Asian concert halls.

Replacing Radu Lupu, the superb pianist Yefim Bronfman returned to Severance Hall on Thursday for a memorable reunion with the orchestra in Beethoven’s fourth piano concerto. Playing calmly and with a perfect sense of proportion and scale, Bronfman made this most engaging of concertos sound like an easy piece of work (which it really is not).

Welser-Möst and the orchestra provided a warm cocoon of sound around the soloist and arrived at tricky meeting points with pinpoint timing. The wind section achieved a particularly impressive blend.

Bronfman played Beethoven’s cadenzas with expressive drama and his runs and passagework were immaculate. Pianist and conductor reined in the tempo of the finale, making the final, faster section all the more thrilling. The ovation was loud and long.

Jörg Widmann’s Teufel Amor (Devil Love) is based on the surviving fragment of a poem by Friedrich Schiller — just two lines that translate as “sweet love linger / in melodic flight”. From this laconic ruin, Widmann has spun a thirty-minute sonic essay on love scored for an immense orchestra. He writes that “Love…contains more contradictions than anything else in the world, epitomizing the extremes of heaven and hell, pleasure and suffering, paradise and the snake pit.”

The snake pit seems to get the first lines as low brass, contrabass and bass clarinet and contrabassoon writhe out an astonishing series of serpentine growls. Eventually, like slow moving plasma, textures shift and meld as lines move into higher regions, exploring a kaleidoscope of alluring colors and timbres as the piece progresses. Later, as in some Mahler symphony movements, listening becomes like dreaming about a parade where bands suddenly appear through the fog playing surprising tunes, then sink back into the mist.

Teufel’s wealth of orchestral effects and musical ingenuity seize and hold the listener’s interest for half an hour, then just when you think the piece should probably come to an end, it quickly does. The orchestra played the new work with assured commitment — with especially stunning effects from the low winds, brass and the large percussion section — and the audience gave it a warm reception. Perhaps we’ll have a second opportunity to hear it soon. In the meantime, score-savvy listeners who wonder about the origin of some of those complicated sounds can have a look at the printed music on the Schott Music Web site.

The evening began with Mozart’s rather odd “Prague” Symphony, which starts uncharacteristically with a slow introduction and lacks a minuet. The composer seems to have been experimenting with developing short motives rather than working with full-blown melodic lines, which makes the piece — tightly constructed as it is — rather more cerebral than loveable. Welser-Möst and the orchestra gave it a splendid, focused reading that nonetheless made you long for more of the wittiness of Haydn or the genius that Beethoven demonstrated in generating and elaborating on small bits of musical material.

END_OF_DOCUMENT_TOKEN_TO_BE_REPLACED

Rodgers & Hammerstein’s Cinderella was originally produced for television in 1957 — seven years after the animated Disney film was released — and starred Julie Andrews. According to the Rodgers & Hammerstein website, it was viewed by over 100 million people. END_OF_DOCUMENT_TOKEN_TO_BE_REPLACED

The story line has its origin in an 1855 play and an 1842 farce that Thornton Wilder mined for his 1938 play The Merchant of Yonkers. When that turned out to be a flop, in 1954 Wilder made the crucial decision to re-center the show around the character of the legendary marriage broker Dolly Gallagher Levi and renamed it The Matchmaker. END_OF_DOCUMENT_TOKEN_TO_BE_REPLACED

The Dodero Center for the Performing Arts at the Gilmore Academy in Gates Mills is one feature of an impressive campus. The auditorium is shallow, the stage is deep, and the ensemble played without a shell. Throughout the program, the sound, especially in instruments’ lower registers, tended to disappear. END_OF_DOCUMENT_TOKEN_TO_BE_REPLACED