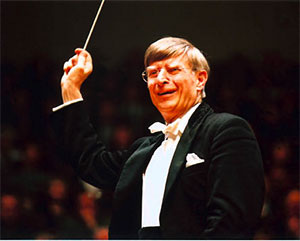 conductor Herbert Blomstedt is in a symphonic mood this weekend and next during his current appearances with The Cleveland Orchestra. Thursday evening’s program featured two of the most original works in the literature. Next weekend’s concerts include two of the most often played, but if Mozart’s No. 40 and Dvorak’s “New World” end up sounding as fresh and newly-composed as Nielsen’s No. 3 and Beethoven’s No. 7 did this week, we’ll have much to look forward to.

The Danish composer Carl Nielsen had a lot in common with his earlier Austrian colleague Anton Bruckner. Both grew up as country lads who combined native straightforwardness with the musical sophistication they acquired in Copenhagen and Vienna to produce highly original compositions that synthesized those two worlds. Both composers also built large structures out of simple but striking motives and seemed to exhaust all the possible permutations of those themes in the course of a symphonic movement (Beethoven started that, but Bruckner and Nielsen took the game to a whole new level).

Nielsen’s Sinfonia espansiva called itself to order with great slashing unisons that became syncopated and led on to a striking theme in the shape of an arch. The movement moved on inexorably in ¾ time — allowing itself at one point to turn into a quasi-sentimental waltz before revisiting its roots.

A sardonic scherzo and a broad-themed finale (the tune begins like Elgar then takes a turn into folk music) brought the symphony to a stirring conclusion — but again, like Bruckner, when Nielsen is finished, he’s finished. The piece ends suddenly on a long chord punctuated by timpani strokes.

The Cleveland Orchestra was thrillingly responsive to Blomstedt’s understated gestures, giving him lean and precise playing even when it must have been difficult to tell where the beat fell at times. Blomstedt warmly acknowledged the wind soloists and singers (who were seen for the first time, appearing in concert dress to take a bow) and offered well-deserved standups to the horns, brass and other sections of the orchestra.

Again conducting from memory, Herbert Blomstedt took a brisk, businesslike approach to Beethoven’s Symphony No. 7, a work many conductors fuss over and make seem overly lengthy as a result. The opening Poco sostenuto moved along agreeably and the succeeding Vivace was both free-spirited and precise. Blomstedt moved on to the second movement without pause and established a brisk tempo that still allowed enough flexibility to let the theme breathe and pulse with nuances.

The scherzo was nicely spirited and humorous but the finale was truly impressive in concept and execution. Winningly combining boisterousness with refinement, Blomstedt grouped every four bars of Beethoven’s music into one big 4/4 bar, giving the movement an unusual sense of sweep and rhythmic gracefulness. A big ovation at the end swelled even louder when Blomstedt passed through the orchestra acknowledging soloists and sections. There were particularly enthusiastic cheers for principal oboist Frank Rosenwein, who played both symphonies and whose solos infused them with exceptional lyricism.

END_OF_DOCUMENT_TOKEN_TO_BE_REPLACED

Supported by engagingly, yet simple staging by Cara Consilvio, a well-prepared cast of singers told the archetypal story of Cinderella with charm and flair. Framing the production was  a sparse but colorful set and wonderful lighting by Dave Brooks. END_OF_DOCUMENT_TOKEN_TO_BE_REPLACED