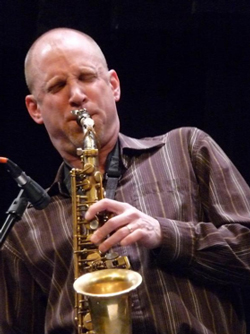 The Cleveland Orchestra concluded its 2012/13 Severance Hall subscription series this weekend with a bang. Riding the wave of success from last week’s “At Home” neighborhood residency program in the Gordon Square Arts District on Cleveland’s West Side, The Happy Dog and its co-owner, Sean Watterson went in with University Circle Inc. and the Orchestra to provide bus service to Severance Hall with a reduced ticket price for the final Fridays @ 7 concert in addition to the festive @fterparty.

Friday evening’s patrons who didn’t ride the bus (it left at 6:00 p.m.) were encouraged to attend the 6:00 p.m. pre-concert st@rters in Reinberger Chamber Music Hall event, a lively sampling of Bobby Selvaggio’s unique saxophone artistry featuring the Bobby Selvaggio Quartet and Strings. Then came the hour-long Fridays @ 7 concert by The Cleveland Orchestra with guest conductor Manfred Honeck. The @fterparty brought the night to a high-energy close with a return to the roots of funk by the 11-piece music collective Mokaad.

Selvaggio performed two of his own jazz pieces — Song for Rebecca and Fading Rose — with his combo of piano, bass and percussion, enhanced by strings, which provided an atmospheric element to the standard jazz combo sound. The cool and suave Song For Rebecca built up to an impressive sax entrance and included laid-back piano and bass solos plus subtle and novel percussion sounds and effects.

The lengthier three-movement Fading Rose gave the musicians solo opportunities. Clapping of hands and skillful tambourine playing, plus tone clusters from the piano helped to create a complex, multi-textured tapestry of sound. The hypnotic repetition of the concluding section’s jaunty motive became fodder for improvisation by all, effectively sending the piece into blissful, rhythmic oblivion.

Speaking of bang, Austrian conductor Manfred Honeck, music director of The Pittsburgh Symphony Orchestra, who was making his Cleveland Orchestra debut in this week’s concerts, brought out plenty of it from the orchestra — but in the best sense of the word. Conducting without a score, Honeck began the first movement from utter silence. Later, his persuasive and commanding lead generated heat and excitement, inspiring the players to thrilling expressive heights and balancing yearning and swooning qualities against the martial and dramatic.

Forming a lush cushion of sound, the strings gently swelled to Richard King’s golden, legato horn solo which began the second movement. The woodwinds had their turn at many lovely and expressive solos, echoing phrases and singing out clearly in addition to punctuating figurations. The strings were radiant, and pinpoint attacks and releases in the fortissimo staccato outbursts were particularly impressive as was Franklin Cohen’s breathtaking pianissimo clarinet solo at the end of the movement.

Graceful and lilting, thethird movement waltz delighted with style, nuance and deftly finessed transitions, while the whooshes of wind played by the strings against the blare of the brass during the return of the march theme in the finale brought the piece to an exhilarating conclusion. This performance of Tchaikovsky’s Fifth Symphony will not be soon forgotten.

Rolf Martinsson’s Open Mind “is an introductory piece, an overture for orchestra” writes composer Rolf Martinsson. An attractive and accessible piece of music — reminiscent at times of Holst and Mennin — it speaks with an individual, and virtuosic voice. With its vast array of kaleidoscopic colors and textures, this dynamic and effective orchestral showpiece served its purpose well and was performed brilliantly by the orchestra under Honeck.

Severance Hall’s Grand Foyer, transformed into a quasi dance club with dazzling colored lights, libations and snacks for the @fterparty, was energized by an unapologetic return to the roots of funk by the 11-piece music collective Mokaad. Founded in Brooklyn by Gabriel Garzon-Montana, vocals/keyboard and guitar, the non-stop performance by this high-energy group included selections from their 2012 debut album Booty. James Brown, George Clinton and Prince are among the influential artists from the past which, when combined with a contemporary landscape, make for a sound which is in the forefront of a growing movement in America. Not only the young people discovered the funk all over again on Friday night; those in the 45-and-over crowd joyfully made a connection to their collective pasts and danced their booties off as well.

Published on ClevelandClassical.com May 28, 2013

END_OF_DOCUMENT_TOKEN_TO_BE_REPLACED

Franz Welser-Möst led the final bows on Saturday night at Severance, like the star of any show should. The Cleveland Orchestra’s music director is in his element presiding over the ensemble’s annual opera production, which this season packs the drama. Verdi’s Otello — in a concert staging that opened May 21 and runs for two more performances (May 26 and 29) — demands big voices, instrumental forces to match, and a conductor who can give it all shape and direction. END_OF_DOCUMENT_TOKEN_TO_BE_REPLACED

The cimbalom was the feature of the show, an instrument capable of taking on many personas. Its performer, Chester Englander, has shaped his career around the instrument, and has inspired composers to write more repertoire for it, some of which was presented on the program. END_OF_DOCUMENT_TOKEN_TO_BE_REPLACED