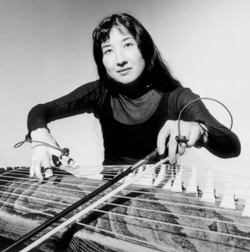 Before the advent of electronic tuning devices there were tuning forks and musicians usually carried at least one in their instrument cases to use to set a pitch standard. Tuning forks also provide entertainment for people of all ages who want to experiment with sound vibrations: strike the fork and place the end on a table and hear how the sound changes when placed on a chair or on the floor.

To be accurate, Masaoka used two differently-sized tuning forks as she methodically placed the forks on different surfaces, the sound altering ever so slightly with each placement. Once she returned to the koto, Masaoka, using a bow, began softly and gradually building in volume by adding recorded electronics and lasers. Loud tremolos evolved into percussive sounds enhanced by tapping the koto on the underside of the large instrument.

The second improvisation began with Masaoka producing percussive sounds as she plucked the instrument’s strings. Adding voice intonations, she gave a momentary Asian quality to the sound. Then, with the addition of strong rhythmic patterns, the improvisation developed a Spanish dance feel. During the Q&A session Miya Masaoko explained that the voice line, although based on traditional Japanese syllables, was an invented language.

The final work began with more vocal lines, only this time Masaoka seemed to be having a conversation with an unseen soul. Snapping her fingers, she ingeniously created a full question and answer dialogue, then ending it with a laugh, changed the mood as she began playing a set of claves and running around.

Again the mood suddenly changed as electronic raindrops started to fall, over which she added some slide whistles and eventually returned to bowing the koto’s strings, then rubbing the strings with a small cymbal while interspersing laser sounds. After striking the underside of the koto with mallets, Masaoka concluded by manipulating the lasers with her hands, almost like a Theremin.

Miya Masaoka is a fascinating and thoughtful musician who offered yet another approach to the art form known as improvisation. As methodical as her performance was, she showed her humorous side as she took questions from the large and appreciative audience. She’s far too classy to say, OK no more questions. Instead she simply broke off the dialogue with, “did someone say there’s wine?”

END_OF_DOCUMENT_TOKEN_TO_BE_REPLACED

The strings-only work by Berg has made relatively frequent appearances on the Orchestra’s programs. In 2021, the musicians recorded it for the In Focus series, and it appeared again on last year’s European tour. Friday’s rendition maintained the group’s characteristic light and effortless playing, each section blending as much as possible to echo the work’s original form as a string quartet. At fifteen minutes total, the piece is quite short, but the dense encoded musical meanings require some extra-attentive listening. Splitting up the three movements ensured that each one could be appreciated on its own. END_OF_DOCUMENT_TOKEN_TO_BE_REPLACED