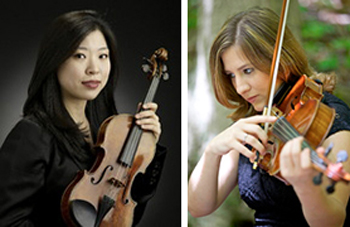 Dances are usually joyous, but on July 9 at Kent State University’s Ludwig Recital Hall violinist Jung-Min Amy Lee gave a recital that explored the somber side of the dance in repertoire ranging from Bach to Esa-Pekka Salonen.

In reality, the “dances” concerned are so inventive and stylized that the only vestige of the ballroom is the forms and a certain attention to rhythm. Lee began with Bach’s Partita No. 2 in d, a collection of five Baroque dance forms. Of these, the jauntiest is the “Gigue,” in which Lee brought out a strong pulse, allowing skittering notes to fall into larger, more comprehensible groupings.

The slow movements of the Partita target the heart rather than the feet, such emotional tour-de-forces that they are. Lee was engrossing in the “Sarabande,” gorgeously rendering the two moments when a single line reaches up from double-stopped chords. The epic “Chaconne,” longer than the other four movements combined, received a performance worthy of its greatness. Lee drove through each variation with an inexorable sense of direction, her brisk tempo sweeping the audience through each affecting twist and turn of the music, especially in the fast and virtuosic variations.

Bach’s masterpiece then dovetailed into a very different chaconne, Salonen’s “Lachen Verlernt” (“Laughing unlearnt”), which takes its title from Schoenberg’s Pierrot Lunaire. Fittingly for a piece by Salonen, who recently appeared in an ad campaign for Apple’s iPad, Lee used a pedal-operated tablet for a score. Her tone sharpened to a fine-tipped knife in stratospheric lines and blistering scales for a violently exciting performance.

Like “Lachen Verlernt”, Eugène Ysaÿe’s Violin Sonata Op. 27, No. 4 nominally contains dance forms, but the connection to those original forms is thin. The “Allemande” is slower than would be expected, and unlike Bach’s “Sarabande,” Ysaÿe’s is calm, with a theme in pizzicato chords. Ironically, the most dancelike movement is the one that lacks a dance form, the “Finale.” Lee invigoratingly sped through its rapid-fire melodies and played the quasi-Baroque middle section with refinement and grace.

Astor Piazzolla’s six Tango Etudes, of which Lee performed three, were the closest in spirit to their dance influences. She inflected the bombastic No. 3 and lovesick No. 4 with romantic vibrato and delighted in the vivacious No. 6.

Altered versions of Baroque music and its dance forms returned in the final piece, Johan Halvorsen’s “Sarabande con variazioni” in g for violin and viola. Lee was joined by fellow Cleveland Orchestra member Joanna Patterson Zakany for this Romantic set of variations on a nobly lamenting theme of Handel. (The piece is effectively another chaconne, since it features variations over a repeating harmonic progression with a chaconne-like rhythm.)

Zakany swayed with the rhythm (at last, a dance) and added warmth to the duo’s sound, the variation featuring viola especially striking with her bronze tone. Halvorsen indulges in full-blown Romanticism for the last variation, with towering stacks of chords and slashing arpeggios. Lee and Zakany matched his passion for an explosive end to a concert of dances that moved the heart and mind rather than the feet.

END_OF_DOCUMENT_TOKEN_TO_BE_REPLACED

Rodgers & Hammerstein’s Cinderella was originally produced for television in 1957 — seven years after the animated Disney film was released — and starred Julie Andrews. According to the Rodgers & Hammerstein website, it was viewed by over 100 million people. END_OF_DOCUMENT_TOKEN_TO_BE_REPLACED

The story line has its origin in an 1855 play and an 1842 farce that Thornton Wilder mined for his 1938 play The Merchant of Yonkers. When that turned out to be a flop, in 1954 Wilder made the crucial decision to re-center the show around the character of the legendary marriage broker Dolly Gallagher Levi and renamed it The Matchmaker. END_OF_DOCUMENT_TOKEN_TO_BE_REPLACED

The Dodero Center for the Performing Arts at the Gilmore Academy in Gates Mills is one feature of an impressive campus. The auditorium is shallow, the stage is deep, and the ensemble played without a shell. Throughout the program, the sound, especially in instruments’ lower registers, tended to disappear. END_OF_DOCUMENT_TOKEN_TO_BE_REPLACED