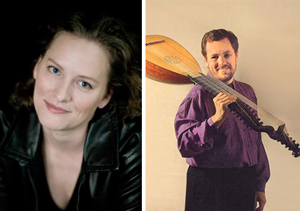 Love, usually thought of in reference to a couple, became here a matter of the four players, sometimes flirting, sometimes fierce, sometimes laughing, sometimes in earnest, but clearly bound to each other in the bonds of the music.

Lovers, bound to each other, need to keep their own identities. And so it was in this “Portrait of Love” — each individual artist kept his or her sound and style. Two were regulars of Les Délices: founder and music director Debra Nagy, playing recorder and oboe; and the stellar Boston gambist Emily Walhout.

They played gorgeously, but the pièces de résistance of the feast were two guest artists. One was soprano Carrie Henneman Shaw (above) from St. Paul, possessed of a lucid voice, an irrepressible charm, a stunning command of French diction, and an ability to deliver a song narrative from four hundred years ago with utter certainty that it could have happened today.

The other guest was the international star, British lutenist Nigel North. For Les Délices to present an artist of this caliber is no small feat for a group only four years old. Nigel North’s musicality combines virtuosity — flying fingers, seemingly effortlessly presenting four-part polyphony on a single baroque lute — with a breathtaking gamut of emotional and tonal qualities. In North’s hands, the lute is not just a vestigial instrument from a forgotten time, but a way for us to understand and experience the intimate music of the late Renaissance and Baroque.

Intimacy was a key to the success of this concert. The welcoming space of Tregoning & Co.’s gallery created a sense of collectivity. The concert was set up with attention to sightlines and acoustic transparency, so that each of the perhaps 150 guests could see and hear. The gallery was full, even though a foot of snow was falling that evening, and my guess—from meeting guests at the reception after, and from the close attention paid to the music – was that these were knowledgeable listeners indeed. Many were members of the Cleveland Guitar Society, which collaborated with Les Délices to sponsor the concert.

I wrote recently in ClevelandClassical.com about the down-sides of presenting intimate chamber music (specifically, lute music) in a too-large venue. These problems were completely absent in Les Délices’s offering. The audience was close to the musicians, and the scale was totally appropriate to the acoustical qualities of the musicians. Instead of being spread through a church built to keep suburban listeners at a comfortable distance from each other, this venue pushed us together. The chairs were not particularly comfortable, but the closeness kept us in comfortable touch with the music and with the other listeners.

What happens with that closeness is that the music and its performance in the moment come alive. Near the end of the concert, a piece by Lully, Récit de la beauté, was performed. It was beautiful and sad; soprano Shaw’s sultry and jazzy rendition of love’s “belles chaines” (beautiful chains) was as penetrating as a Piaf ballad. Should a reviewer admit that he was moved to tears?

I should write about some of the details of the songs. The concert presented music that I’d wager few of us in the audience had heard before. Lully was by far the most famous name in the program. The first section was from early 17th-century music: lute pieces by Robert Ballard, and courtly songs by Pierre Guédron and Gabrielle Bataille. The songs were apparently arrangements, originally composed for multiple voices; but here performed by a single voice, with the lute, continuo, and recorder providing the polyphony. They were strophic songs — in stanzas, like ballads — presented with a sensitive variety of instrumentation and voicing.

In one, Guédron’s “Ma bergère non légère en amours,” Shaw dazzled with her command of the French patter song, moving about the difficult French consonants even faster (I think) than the lutenist’s fingers.

The early 17th-century songs were succeeded by songs from later in the same century, in the bigger Baroque mode. North put down his lute and took up the theorbo, that complicated Baroque equivalent of the electric guitar. Nagy put down the recorder and took up the oboe. The intensity of feeling had been present from the opening; now the acoustic scale rose to match it in songs of abandonment, unrequited love—and, not to be too gloomy, shared passion.

The passion was conveyed in no small part by the gripping ornamentation in the vocal line. Carrie Shaw marked the key words with intense and sudden slides, dark vocal mordents, and subtle, momentary shakes. The effect was to bring the Mediterranean south into these French songs, like the dark, tragic sound of Portuguese fado.

The last song in the program was Michel Lambert’s Vos mepris chaque jour — “your scorn causes me a thousand anxieties each day.” Its haunting melody, I knew, came from some earlier source, but I could not pin it down. But in that knowledgeable audience, I trusted that someone would know. And indeed, a friend nailed the source for me — the gorgeous duet “Pur ti miro” from Monteverdi’s Coronation of Poppea. The hits keep coming!

The lyrics of Lambert’s song sum up the concert for me: “I would die of pleasure if I were happier.”

The first such video, capturing the October 20 performance of Resilience at First Baptist Church in Shaker Heights, delivered handsomely on that promise. Erica Brenner’s sensitive videography and audio mixing preserved brilliant performances of music that illuminated two troubled periods in history: the plague of London in 1665, and the outbreaks of cholera and dysentery that dampened but failed to defeat the human spirit at the end of the American Civil War two centuries later. END_OF_DOCUMENT_TOKEN_TO_BE_REPLACED

The Diamond Brass Quintet opened Rocky River Chamber Music Society’s new season on Monday, October 12 with nobody in the pews at West Shore Unitarian Universalist Church. Like most performances these days, the concert was only attendable online. The players were widely-spaced on the stage, plexiglass shields were in place to cut down on aerosol transmissions, and the quintet took two intervals to go outdoors and let the air in the sanctuary refresh itself. (Rehearsals had been held outside as well.) END_OF_DOCUMENT_TOKEN_TO_BE_REPLACED

“Bewitched,” the first subscription concert of this season by Les Délices, can be summed up in one word: sensational. In her introductory remarks, director Debra Nagy talked about the “Embracing Change” theme of the season and completely rethinking the concert experience for streaming. The detailed planning was in evidence throughout the program. “Bewitched” was not just a concert; it was a carefully planned musical film, with elements of drama and music appreciation, all in support of the inspired program choices featuring Medea and Circe, two famous witches (or sorceresses, if you prefer) of classical antiquity. END_OF_DOCUMENT_TOKEN_TO_BE_REPLACED

END_OF_DOCUMENT_TOKEN_TO_BE_REPLACED

Though it had amassed a vast trove of audio over the decades, The Cleveland Orchestra has come late to the game in the video department. Even so, the organization wasn’t about to rush to produce the equivalent of home movies to keep its patrons engaged while live events were on hold. END_OF_DOCUMENT_TOKEN_TO_BE_REPLACED

END_OF_DOCUMENT_TOKEN_TO_BE_REPLACED

Although it wasn’t the original plan to go online last weekend for the final round of the James Stroud Classical Guitar Competition, moving to a digital format suited the event well. Young performers Aytahn Benavi, Patricia Hernandez, Ian Tubbs, and Eric Wang played in the intimate setting of their own homes, giving everyone who tuned in a front row seat. END_OF_DOCUMENT_TOKEN_TO_BE_REPLACED