Last weekend, CCS burst suddenly into bloom like a crocus after a long winter with the first of two concerts anchoring its promising new enterprise, NEOSonicFest on Friday, March 28 in Drinko Hall at Cleveland State.

To open the six-concert festival, Steven Smith led CCS in a tribute to its founding conductor, resident punster and beloved eccentric Edwin London, who died last year. The program featured two of London’s many orchestral works, and a collaboration with Verb Ballets, who provided movement choreographed by Richard Dickinson to a piano concerto commemorating the sinking of The Edmund Fitzgerald.

Flutist Sean Gabriel, who along with CCS’s former executive director Christina Thoburn gave personal reminiscences of Ed London later in the evening, led off the program with London’s 2001 Melodrama for flute and chamber orchestra, its title a reference to operatic scenes where dialogue is spoken over music. Gabriel was a loquacious soloist, handling virtuosic lines with ease and ending with an arresting cadenza. Smith and the orchestra provided evocative underlay.

London’s second work, Federico’s Follies, dates from 1998 and is itself a tribute — to Italian film maker Federico Fellini. Its five scenes kept percussionists Mell Csicsila and Andrew Pongracz busily moving between mallets and other instruments and gave prominent moments to clarinetist/bass clarinetist Lou Gangale, hornist Bill Hoyt and pianist Shuai Wang. Each vignette began imaginatively but each seemed to run out of steam along the way, trailing off to sudden endings.

Eight dancers from Verb Ballets joined Nicholas Underhill and the ensemble for Geoffrey Peterson’s 2002 concerto for piano and strings, The Edmund Fitzgerald, a tribute this time to the crew of the ore boat that sank in Lake Superior during a November gale in 1975.

Peterson’s descriptive music was rich in color and watery imagery and studded with fragments of sea chanties and the funeral march from Beethoven’s “Eroica” symphony. Underhill fluently dispatched his busy piano part. The Verb dancers formed various groupings at the front of the stage and roiled about meaningfully in a long blue cloth, but the addition of dance felt gratuitous. The music could have stood on its own. 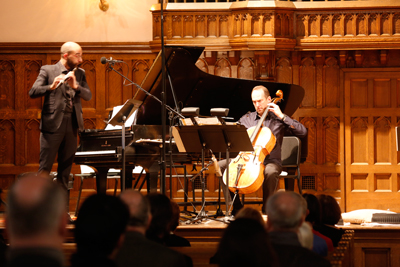 Ensemble HD, a collective of Cleveland Orchestra musicians so named because of their innovative performances in the West Side bar, The Happy Dog, transplanted their act to Harkness Chapel at CWRU on Sunday evening, March 30. The program was a tag-team affair of highly varied music by Kaija Saariaho, Toru Takemitsu, David Lang, Esa-Pekka Salonen, Luciano Berio and George Crumb, and included a second guest appearance by Verb Ballets choreographed by Sarah Whale.

Many of the pieces were quite short: Saariaho’s Mirrors (with flutist Joshua Smith and cellist Charles Bernard — four minutes); Takemitsu’s A bird came down the walk (violist Joanna Patterson Zakany and pianist Christina Dahl — seven minutes); and Berio’s Sequenza (oboist Frank Rosenwein with Bernard playing a drone — eight minutes) and ranged in style from Takemitsu’s blues-infused harmonies to Sarriaho’s extended flute techniques (e.g. speaking French into the instrument) and the persistent repeated notes and near-squawks of the Berio.

Silliest was David Lang’s Little Eye, named for a children’s game played from the back seat on long car trips, which pitted Bernard playing an ostinato theme against four of the other musicians sitting in a semicircle onstage, rasping and playing single notes on toy xylophones. Probably fun as a party game, but not so effective in a concert, especially after about three of its seven-minutes’ duration.

The program ended with Crumb’s Messiaen-inspired Vox Balaenae (Voice of the Whale) played by Smith, Bernard and Dahl with curious, Danish Noir movements from Verb, who started out in the pews, held mysterious confrontations in the aisles, then spent the rest of the piece doing something onstage in dim blue light, most of that a mystery due to sight lines.

Altogether, an enjoyable hour and a half of varied repertoire performed by musicians who have completely mastered their instruments and can do wonderfully nuanced things with the music. At the beginning, Joshua Smith noted that this performance would be a hybrid between Severance Hall and its tuxedos and the Happy Dog with its jeans and t-shirts, but without hot dogs and beer. Come to think of it, a venue with eats and libations seemed to be just what was missing.

Organist Jonathan William Moyer at the Church of the Covenant 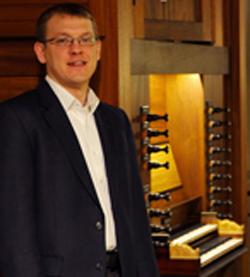 If you were one of the not-quite-four-dozen people who attended Jonathan Moyer’s amazing organ recital at the Church of the Covenant on Monday evening, March 31, make a note in your diary — you’ll probably never hear an organ program like that again.

Moyer’s “Music from the Abyss,” based on references from Psalm 130 and Habukkuk 3:10, assembled pieces by J.S. Bach, Olivier Messiaen, Piet Kee, György Ligeti, Arnold Schoenberg and William Bolton into a super-intense hour of introspection “that probes the depths of the human psyche through some of the most innovative works for organ composed in the 20th century” (program note).

Moyer, who is organist and music director at the Covenant, did a lot of commuting during the evening, alternating between the church’s new 17th-century-style instrument in the rear gallery and the large, eclectic Skinner—Aeolian-Skinner instrument that speaks from chambers into the chancel.

The gallery organ, with its traditional wind supply and mechanical stop and key action, was perfect for Bach’s Aus tiefer Not, a thickly-textured, six-voice setting that takes two hands and two feet to play, and for Piet Kee’ s transparent Four Pieces for Manuals, but it absolutely triumphed in Ligeti’s Volumina, when Moyer and his two assistants challenged its lungs with cluster chords ranging from a few notes to wind-robbing forearms’ worth of pitches.

The organ survived these punches in the diaphragm, but also produced an expressive range of sighs, whistles, moans, screams and other colorful exclamations — many of them effected by partially opening stop sliders — that would be the envy of a modern synthesizer.

At the large organ, Moyer evoked Messiaen’s Les Mains de l’Abîme (The Hands of the Abyss) with impossibly long-held chords and colorful, hollow-sounding stop combinations (including a trembling Vox Humana in its low range), found a whole palette of other colors for Schoenberg’s thorny Variations on a Recitative, and brought his listeners safely back at the end with the comforting murmurs of Bolcom’s Nearer, My God, to Thee, punctuated by soft handbells played by his assistants.

Ingenious in concept and splendid in its execution, Jonathan Moyer’s “Music from the Abyss” made an unusual and impressive addition to NEOSonicFest.

Photo of CCS by Bill Nairnan.

Photo of Joshua Smith and Charles Barnard by Harry Weller.

END_OF_DOCUMENT_TOKEN_TO_BE_REPLACED

Supported by engagingly, yet simple staging by Cara Consilvio, a well-prepared cast of singers told the archetypal story of Cinderella with charm and flair. Framing the production was  a sparse but colorful set and wonderful lighting by Dave Brooks. END_OF_DOCUMENT_TOKEN_TO_BE_REPLACED