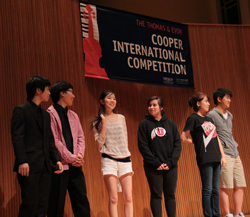 The last hurdle on the way to Severance Hall for competitors in the Oberlin Cooper International Violin Competition is the recital round, where six performers revisit their solo repertoire in 30-minute recitals chosen by the jury from the semi-final round. A large crowd turned out to hear the three-and-a-half hour program in Warner Concert Hall at the Oberlin Conservatory on Wednesday evening, a highly-structured event carried live on WCLV, 104.9 FM and hosted by Robert Conrad.

A second hearing confirmed a lot that these ears noted in the concerto round the day before, but there were also some pleasant surprises.

Kyumin Park (16, Seoul, South Korea) maintained his rather cautious approach in pieces by Beethoven, Paganini and Chausson. His Beethoven (Op. 12, No. 1, Allegro) was strong and clean, his Paganini (Caprice No. 24) brilliant enough, his Chausson (Poème) perhaps more calculated than spontaneous despite expansive collaborative playing from Elizabeth DeMio. Here’s a talented player who just needs to be fearless and go for it.

Ming Lu (18, Shenyang, China) was best in Ysaÿe’s intense solo Sonata No. 3, “Ballade”, playing a complex piece accurately and skillfully. Her Beethoven (Op. 30, No. 3, Allegro assai), Mozart (Concerto K.216, Adagio) and Kreisler (Liebesleid) demonstrated a fine, even tone but sounded cool and unemotional. Lu stood far downstage, separating herself from the pianist (Roberta Whitely) and continuously scowled while playing, a trait that can be offputting.

Gallia Kastner (16, Arlington Heights, IL) was one of the pleasant surprises. Her Chausson Poème was thoroughly romantic in concept and her impassioned and well-shaped performance riveting. While her Beethoven (Op. 12, No. 1, Allegro) was on the hefty side, her Tchaikovsky (Valse-Scherzo, op. 34) was witty and humorous, sporting a wild little cadenza. Her rapport with both the audience and pianist Roberta Whitely were outstanding.

Angela Wee (16, Woodbury, NY) continued to bring too large a concept to pieces by Beethoven (Op. 24, Allegro) and Paganini (Caprice No. 5), playing secondary material louder than the pianist’s real themes in the Beethoven, and blazing through the Paganini with few changes of color and dynamics. Her high notes were splendid in Wieniawski’s Fantasie brillante on themes from Gounod’s “Faust” but unrelenting fortes and heavy vibrato became tedious (especially in a piece that overstays its welcome to begin with). She was joined by Alicja Basinska at the piano.

Jieming Tang (15, Hefei, China) played a genial, delicate version of Beethoven’s Spring sonata (keeping his cool when a spotlight exploded noisily) and an exquisitely voiced Adagio from Mozart’s third concerto warmed by tasteful vibrato. His performance of Saint-Saëns’s Introduction and Rondo Capriccioso showed an easy virtuosity coupled with lyricism and a fine sense of pace. As in the concerto round, he kept closely in touch with his pianist, Elizabeth DeMio.

After a second spotlight popped, Ching-Yi Wei (18, Tainan, Taiwan) once again brought a big tone to his set of Mozart, Wieniawski and Tchaikovsky, an outsized one for the Andante from the fourth violin concerto, but one well-suited to the Wieniawski “Faust” fantasia, where his near-polyphonic alternation of harmonics with other material at one point was superb. Wei stood well downstage away from his pianist (Roberta Whitely) and shared intense facial expressions with the audience. His Valse-Scherzo was a decidedly heavy dance but his tone and demeanor were mesmerizing.

Postscript: following this round, the jury awarded the audience prize to Ching-Yi Wei, sixth prize to Angela Wee, fifth prize to Jieming Tang, fourth prize to Gallia Kastner, and advanced Kyumin Park, Ming Liu and Ching-Yi Wei to the finals with The Cleveland Orchestra on Friday evening at Severance Hall.

Music director and conductor Daniel Meyer built his playlist around Cleveland themes and scenes. “Exploration CLE” made use of engaging selections from the classical canon and beyond that celebrated “what makes Cleveland so special.” Happily, he and his musicians avoided constructing a visual slide show, choosing to let the music speak for itself. END_OF_DOCUMENT_TOKEN_TO_BE_REPLACED

You could see the relationship at work on a practical level. Repertoire for two players at the same piano requires a certain choreography. There’s just one of each pedal to share, and the hand crossings left and right — which can be so fun to watch a soloist pull off — get more complicated when another person’s involved. At times, Pompa-Baldi drew a hand away from the keyboard and into his body, making room for Friscioni, and at the close of a few delicate phrases, the two were crouched together over the same final notes at one end of the instrument. END_OF_DOCUMENT_TOKEN_TO_BE_REPLACED

The signature sounds of these famous film scores are not so much John Williams’ invention as allusions to other classical pieces. The foreboding half-step from Jaws, growing more and more furious in the cellos and basses, shares something with Dvořák’s “New World” Symphony and Bartok’s Miraculous Mandarin. END_OF_DOCUMENT_TOKEN_TO_BE_REPLACED