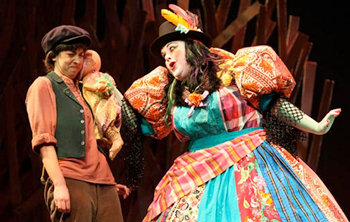 Jonathon Field never fails to bring new insights into his opera productions, and Oberlin Opera Theater’s fall show, Humperdinck’s Hansel und Gretel is full of details that add to the delicious ambiguity of what many of us think of as a children’s opera. After all, it’s a fairy tale decked out with a wicked witch, a gingerbread house and guardian angels. But scratch the surface of this musical rendering of a Brothers Grimm story and disturbing topics come to light.

When we first meet Hansel (Marisa Novak) and Gretel (Alexis Aimé), they seem like normal adolescent siblings who are locked in a continuous squabble — until you notice that there’re a lot of physical blows being exchanged. That’s a stock element in all kinds of comedy from Punch and Judy shows to animated cartoons, but as the scene goes on and mother (Kayleigh Decker) and father (Daveed Buzaglo) come home, the level of physical violence begins to add up to a diagnosis: this is a dysfunctional family who are plagued by hunger, overshadowed by drunkenness and who take out their frustrations on each other with fists and brooms (their cottage industry has stockpiled plenty of weapons close at hand).

You can set that level of analysis aside if you like, but it keeps coming back. When the children first encounter the witch (Karen Jesse), she’s not at all like the cardboard character you expect (black gown, pointy hat). She’s garishly costumed in frightfully bright colors, the kind of overdone attempt to be alluring that Aschenbach created in Death in Venice — also directed at attracting children.

And her house! Lopsided and multi-hued, it’s miles from the gingerbread houses of German folklore and Christmas celebrations. Look closely and you’ll see sinister decorations: masks of children’s faces like memorial plaques to those who have already passed through the witch’s oven.

If this production keeps the mind swinging back and forth between children’s literature and darker psychological topics, it’s also full of beautiful elements. The singing is first-class all around and the acting is assured and natural. The sets by Christopher McCollum are magical — the cross-hatch of forest in Act I picks up the imagery of brooms, and the costumes by Chris Flaharty are both traditional and in the case of the witch, completely outrageous. The moonrise sequence at the end of Act II (lighting by Jeremy K. Benjamin) is visually stunning and outclasses the most dazzling digital effects available in cinema. 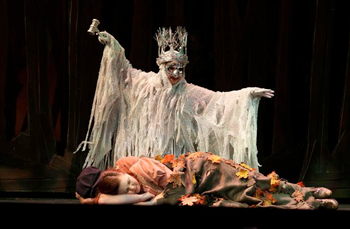 It’s also full of wry humor, like the sparkling and diaphanous Taumännchen (Emily Peragine) who wakes the children at dawn by tapping them with a silver gavel then bonks herself on the head as she exits.

Karen Jesse, who sang the role of the Witch when she was a student at Oberlin, made a triumphant return to the Hall Auditorium stage. Her forceful voice and splendid acting stole the show in Act III.

Underpinning this fine production was the Oberlin Chamber Orchestra, 47-strong, who played Humperdinck’s Wagner-inspired score with warmth and wonderful stamina under the baton of Raphael Jiménez. Balances were carefully calculated throughout the show and never did the grandeur of the scoring engulf the singers.

Oberlin Choristers plus a choir of sopranos and mezzos played the fourteen angels who watched over the sleeping Hansel and Gretel (their eyes made heavy by the Sandmännchen, Micaela Aldridge) and reappeared in the final scene as the resuscitated children who had perished in the Witch’s oven, doffing their death masks and joining the general celebration. In which there was one final, unmistakeable Jonathon Field touch: an effigy of the Witch was dragged on and beheaded, her head held up by the hair like that of John the Baptist in Richard Strauss’s Salome.