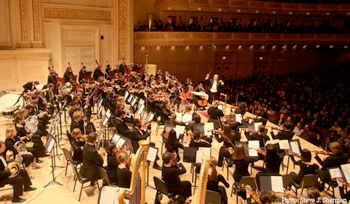 off a week of performances that brought their jazz, new music, and Baroque ensembles to four of New York City’s prized venues, the Oberlin Conservatory of Music imported its prestigious orchestra to Carnegie Hall for a varied program that included contributions from two of the school’s most famous alumni, pianist Jeremy Denk and Pulitzer Prize-winning composer Christopher Rouse.

Conductor Raphael Jiménez was wise to showcase the divergent talents of his ensemble on the program’s first half, programming both the high camp of Ravel’s La Valse and the Viennese delicacy of Mozart’s Piano Concerto No. 21. After a tentative and shadowy opening in the Ravel, the orchestra’s rich colors slowly began to emerge, led by a glossy violin section that displayed impeccable intonation that endured even as the composer continued to process his stately waltz through the fractured machine of a postwar Cubist landscape.

Denk was superb throughout the Mozart, fleetingly moving across the expanse of the keyboard with incredible precision and accuracy. More importantly, Denk made sure to keep the forward motion of the phrasing intact, aggressively picking up the pace when the orchestra began to lag behind during the first and third movements. The famous theme of the central Andante was gracefully introduced by the first violins, delivering a set of robust colors before handing the material over to the soloist’s right hand.

After 24 years, Christopher Rouse’s Iscariot received its New York premiere—a highly static work loosely based on a pattern of alternating strophes and antistrophes found in the ancient Greek dramatic tradition. Despite some incredible playing from the duo percussionists and accompanying celesta player, however, the work was essentially an exercise in white noise, with all of the recurring strophes relying on stacked harmonies that slowly evolved through individual voicing changes in the string section. On a program filled with effortlessly melody and motion, Iscariot felt like a chasm of sound that couldn’t be easily traversed.

Thankfully, Stravinsky’s 1919 suite from The Firebird brought the evening to a ferocious close. Jiménez admirably extracted the bourgeoning composer’s varied orchestration, showcasing Stravinsky’s affinity for both the French impressionist style in the Firebird’s arrival and dance, as well as the Russian folk music of the princess’s round dance and glorious finale.

The principal winds were the standout players of the evening, with flutist Helen Park, clarinetist Zachary Good, and piccoloist Julia McGehee giving a stunning account of the dance’s fiendishly serpentine flutters, while bassoonist Sean Gordon’s rich and plaintive sound gave life to the exotic chant of the Berceuse.

Given the nearly sold-out crowd that packed Carnegie Hall and the thunderous applause the orchestra met after each piece, it’s clear that Jiménez and his ensemble made fine ambassadors for their institution, showing the New York City conservatories that there is definitely some domestic competition when it comes to outstanding college bands.

Michael Cirigliano IIis a Manhattan-based writer, copy editor, and classical musician. He learned at a young age that music can be the voice of rebellion, frustrating his Led Zeppelin/Black Sabbath-listening parents by developing a love for Mahler and Tchaikovsky. His world quickly expanded, and now he takes great joy in discussing the career arcs of both David Bowie and Shostakovich over tea.

Thanks to Peter Matthews, our colleague at the New York online journal, Feast of Music, for arranging coverage of this performance.

Click 012112ObOrchCHMCRev for a printable version of this article.

Jackson began the program with a recitation of Langston Hughes’ poem “Helen Keller” — the first of five poems by Hughes that served as interludes between each piece on the first half. END_OF_DOCUMENT_TOKEN_TO_BE_REPLACED

Pianos with pins and tape on strings, a bass drum and tam tam, crotales, Almglocken, and vibes. Microphones were hooked up all around the instruments. The feed was sent to speakers around the room. Lighting designer Nicholas Houfek hung incandescent globes over the arrangement of instruments from thin black wires stretching across the beams. END_OF_DOCUMENT_TOKEN_TO_BE_REPLACED

From the podium, Elim Chan set an ambitious tone for the evening. The rising star conductor, here in her Cleveland Orchestra debut, has a commanding style, and every twist and turn in Saturday’s performance tracked closely with her baton. END_OF_DOCUMENT_TOKEN_TO_BE_REPLACED