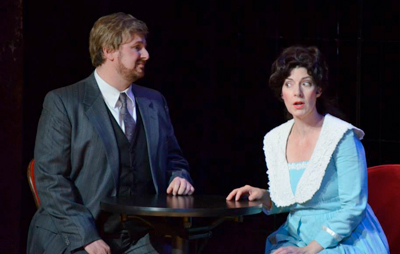 Opera is fun! Even if in the end all parties do not live happily ever after. Still, when everything works during a performance, when it all comes together, one would be hard pressed to find a more entertaining way to spend three hours than at the opera.

La Rondine (the Swallow) is one of Puccini’s lesser-known operas and in fact it is the composer’s sole experiment in writing operetta. Although it has never been produced as often as some of his more popular works, with this vocally splendid cast combined with brilliant staging by Scott Skiba and deft coordination between the pit and stage by conductor Domenico Boyagian, Opera Per Tutti certainly made a case for La Rondine to get more face time with audiences. Theatrically speaking, the plot is lively with a nice mix of comedy and drama without ever becoming tragic. But above all, Puccini’s score is gorgeous.

La Rondine tells the story of the rich courtesan Magda de Civry, who falls in love with Ruggero, a young man from a proper family, with whom Magda neglects to be completely truthful about her past in order to win his everlasting affection — a decision that eventually come back to haunt her. This is of course an over-simplification: there’re plenty of twists and turns and disguises involved along the way.

The lovely-voiced Andrea Anelli sang the role of Magda with sensitivity, grace and charm. Tenor Timothy Culver was an appropriately shy Ruggero, singing with a clear and focused sound. And the romantic chemistry of the two characters was evident throughout.

Rebecca Freshwater was adorably perky as the maid Lisette, and John David Nevergall brought a sense of bemusement to the role of Prunier, a poet and love interest of Lisette. Alfred Anderson was commanding in the role of Rambaldo, Magda’s benefactor. Jilda Farias, Bethany Grace Mamola, Elizabeth Frey, Zachrey Rusk Brian Skoog and Robert Pierce each made the most of their supporting roles as party guests during Act I. 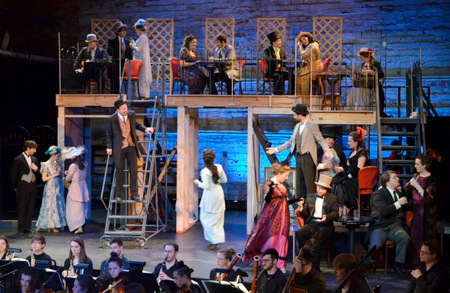 All stops were pulled out during the second act with the addition of an ensemble of street singers, artists, students, flower girls and dancers. In re-creating Bullier’s Café, Skiba used every inch of space to maximum effect. This was a crowded Parisian café of merrymakers. And the intimate Gordon Square Theatre allowed the audience to feel like they were part of the action as characters developed and ended mini-relationships with one another.

Erin Buck and Ethan Lee danced with graceful athleticism: the lack of real estate didn’t prohibit them from entertaining the café patrons. In addition to stylish sets and costumes, the sheer volume of sound produced from the stage and pit filled the theatre in a most glorious fashion.

Throughout the performance, conductor Domenico Boyagian was in full control of the proceedings and kept things moving while still allowing the singers room to bask in the lushness that is Puccini. The orchestra sounded top-notch and responded quickly to every small tempo and dynamic adjustment made by Boyagian. He is an impressive conductor and it will be interesting to follow the development of his career.

It has been enjoyable to watch Opera Per Tutti as they have progressed as a company and this performance gave high hopes that it will continue to do so. They choose their titles carefully, and over time have assembled a group of artists who, judging from this performance, obviously enjoy working with one another.

Opera Per Tutti has also attracted a large and loyal following: both of these performances sold out. I discovered during a conversation following the performance that prior to each performance 20 to 30 people had to be turned away. What a problem to have to solve. Opera Per Tutti, Opera for all.

Franz Schmidt’s Symphony No. 4 showcased the ensemble, under guest conductor Jonathan Berman, in the standard conventions of a not-so-standard piece. But at the start of the program, the musicians were equal partners to pianist Cédric Tiberghien, whose playing could be as bold as the full orchestra or as intimate as any instrumental solo. END_OF_DOCUMENT_TOKEN_TO_BE_REPLACED

END_OF_DOCUMENT_TOKEN_TO_BE_REPLACED

Jackson began the program with a recitation of Langston Hughes’ poem “Helen Keller” — the first of five poems by Hughes that served as interludes between each piece on the first half. END_OF_DOCUMENT_TOKEN_TO_BE_REPLACED

Pianos with pins and tape on strings, a bass drum and tam tam, crotales, Almglocken, and vibes. Microphones were hooked up all around the instruments. The feed was sent to speakers around the room. Lighting designer Nicholas Houfek hung incandescent globes over the arrangement of instruments from thin black wires stretching across the beams. END_OF_DOCUMENT_TOKEN_TO_BE_REPLACED

From the podium, Elim Chan set an ambitious tone for the evening. The rising star conductor, here in her Cleveland Orchestra debut, has a commanding style, and every twist and turn in Saturday’s performance tracked closely with her baton. END_OF_DOCUMENT_TOKEN_TO_BE_REPLACED