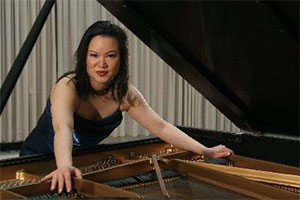 Last Sunday afternoon the Suburban Symphony presented an interesting “All Russian Program” at the University School Shaker Campus’s Conway Hall, an acoustically effective six hundred seat auditorium. The highlight was an excellent performance of the rarely heard Shostakovich Concerto for Piano, Trumpet, and String Orchestra, Opus 35 with Angelin Chang as piano soloist. Chang chairs the Keyboard Department at Cleveland State University. The unusual instrumentation made for a transparent orchestral texture that combined well with Chang’s wonderful musical exuberance and skill.

Shostakovich wrote this humorous and witty piece at age twenty-seven, premiering the piano part himself, accompanied by the Leningrad Philharmonic Orchestra. The Concerto precipitated the composer’s first difficulties with Stalin that were to trouble him for many years, though the piece’s tongue-in-cheek character, similar to that of his Tahiti Trot, composed four years earlier, makes Stalin’s distaste all the more incomprehensible.

Chang’s alert and intense performance of the opening Allegretto fairly sparkled and seemed to sweep up the orchestra in her wake. The piano’s charming first theme, supporting itself with a walking bass hinting at pop music, was delightful, particularly in the right hand octave passages. Principal trumpet Eric Dina joined the piano solo at the start, even to the point of canonically anticipating some of her melodic material. The even more animated second theme, both tuneful and playful, was answered by soloistic material in the cello section.

The slow and expressive second movement, Lento, began with a high register first violin lyrical tune. The piano accompanied with continuous eighth notes. After virtuosic piano octave passages in both hands, the trumpet entered with its own melody, followed by a dialogue with the piano and further soloistic cello writing. Dynamic balance was perfect throughout.

The tiny third movement, Moderato, served as brief introduction to the excitable and frothy fourth movement, Allegro con brio. The trumpet took on an equal role with the piano, rising in energy and register to fanfare passages, and both soloists had lively interchanges with the strings. Chang scintillated in the extensive closing cadenza. This was a truly inspired performance throughout.

The concert opened with another rarely performed piece, the Stravinsky Symphonies of Wind Instruments, scored only for expanded woodwinds and brass. Originally composed in 1920 as a memorial to Claude Debussy, who had passed away in 1918, it is not a symphony in the classical sense, but rather participates in the earlier meaning of “sounding together” applicable to Renaissance and Baroque music.

Music director Martin Kessler took the time to demonstrate the piece’s metric complexity in a passage that constantly changed meter and sense of prevailing beat. The extra inclusion of alto flute and alto clarinet added to the large wind sections made for a fascinating sound. Connections with Petroushka and other early Stravinsky compositions were stylistically apparent, but complexities of harmonic material and meter made the piece challenging to absorb. Kessler conducted skillfully and the performance was excellent.

The same cannot be said for Tchaikovsky’s Romeo and Juliet Overture Fantasy. Here there were some intonation problems in the upper double reeds and the strings simply lacked sufficient power to balance the rest of the orchestra. The brass and percussion were excellent throughout, but woodwinds and strings lacked the necessary energy and intense accentuations needed for the incessant restatements of the “conflict” theme. On the other hand, the “Friar Lawrence” and “Love” themes were largely well played.

END_OF_DOCUMENT_TOKEN_TO_BE_REPLACED

The strings-only work by Berg has made relatively frequent appearances on the Orchestra’s programs. In 2021, the musicians recorded it for the In Focus series, and it appeared again on last year’s European tour. Friday’s rendition maintained the group’s characteristic light and effortless playing, each section blending as much as possible to echo the work’s original form as a string quartet. At fifteen minutes total, the piece is quite short, but the dense encoded musical meanings require some extra-attentive listening. Splitting up the three movements ensured that each one could be appreciated on its own. END_OF_DOCUMENT_TOKEN_TO_BE_REPLACED