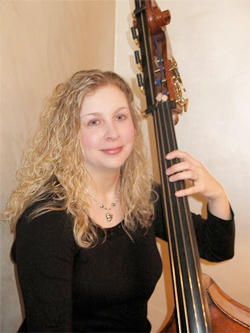 Bottesini (1821-1889) entered the Milan Conservatory at fourteen as a scholarship student, graduating four years later after winning a three hundred franc prize for his bass playing. He was soon designated “the Paganini of the bass” for his virtuosity. Bottesini had a huge following and regularly added new original showpieces to his repertoire. He became principal bass at a Venetian theater where Verdi’s opera, I due Foscari was being performed. The two composers became lifelong friends. Though highly respected as a double bassist, Bottesini also acquired a European following as an opera conductor, and composed thirteen operas. He is best known for his virtuosic and idiomatic bass writing in the concertos that continue to be played today.

The B Minor Concerto, scored for one flute, two oboes, two horns, timpani and strings, is a lovely piece, replete with lively themes, expressive romantic tunes, and spectacular feats of technical dexterity. Hagen began the first movement, Allegro, with a lovely tune, echoed periodically by the violins. There were many delightful sequences that culminated in an appealing circle progression supported by moving perfect fourths in the orchestra bass line. After an oboe solo, an attractive solo flute imitated lines in the solo double bass. Hagen played a gorgeous solo cadenza full of rapid sixteenths to close the movement.

The final Allegro highlighted some attractive counterpoint, with fine high register bassoons playing an important role. Hagen’s performance was excellent, though one longed for a wider dynamic range in her sound, which sometimes struggled to be heard. The orchestra accompanied effectively throughout.

Three tasty morsels made up the balance of the first half. Carl Maria von Weber’s Abu Hassan Overture was as boisterously cheerful as it was brief. The opera, based on a tale from the Thousand and One Nights necessitated using the Arabic marching band sound of Janissary percussion. The three-minute piece was a delight.

The second half performance of Johann Sebastian Bach’s Air from Suite No. 3 in D Major, BWV 1068, sometimes called Air on the G String, was truly inspired. The version was for strings alone, and the hushed beauty swept up the audience in its wake. Mozart’s Symphony No 35 in D Major, K. 385, the Haffner, with its frothy lightness, seemed anticlimactic in comparison.

The cimbalom was the feature of the show, an instrument capable of taking on many personas. Its performer, Chester Englander, has shaped his career around the instrument, and has inspired composers to write more repertoire for it, some of which was presented on the program. END_OF_DOCUMENT_TOKEN_TO_BE_REPLACED

You wouldn’t expect that acoustic from a glance at the nave, which is wide and long, but not especially lofty. But when I guest conducted a local amateur choir and professional orchestra in Beethoven’s Mass in C there a few years back, during the first rehearsal we released the final chord of the “Gloria” and listened in astonishment for the next several seconds. The sound continued to roll down the space like the big wave that surfers dream about. END_OF_DOCUMENT_TOKEN_TO_BE_REPLACED