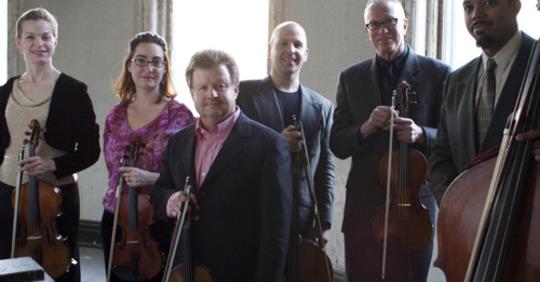 “What if Mozart were born today — in Cuba?” Taken out of context, the question reads like a surrealist conversation starter, although it made sense as a mid-performance remark during a recent concert. It came from double bassist and arts advocate Rick Robinson, whose mission it is to start lively conversations between the classical world and non-fans.

Robinson brought his Detroit-based CutTime Simfonica to Rocky River Presbyterian Church on Sunday, March 24. The ensemble, a quintet of violins, viola, bass, and drum kit, is part of a family of CutTime projects, all of which aim to spark a love of classical music in everyone. Concert-hall rituals have their place, Robinson argues, but not in the clubs, churches, and community gathering spots where CutTime performs.

Robinson remains the lone permanent member of the CutTime ensembles, but he’s always joined by first-rate collaborators. From the opening bars of Mozart’s Divertimento in D, violinists Florina Georgia and Daniel Winnick, violist Joseph Deller, and percussionist Mike List matched Robinson’s high level of technical and interpretive skill. Having passed plastic shakers to the audience before the downbeat, the group remained locked into their pulse even as a haze of beats emanated from the pews.

The Gavottes from Bach’s Third Orchestral Suite sounded bright and fresh in the reduced instrumentation, though as in many moments, the percussion remained silent even when its power of propulsion might have charmed. The opening section of Mozart’s Symphony No. 25 likewise gained in transparency, and Deller played with a lovely, singing tone. Robinson’s “Mozart in Cuba” question introduced a bouncy take on the opening of the composer’s 40th symphony.

List brought out a triangle for the Waltz from Tchaikovsky’s Serenade for Strings, but his true purpose became clear in two groove-driven pieces by Robinson. Pork ‘n’ Beans served up a concise introduction to its composer’s style, with Mozartean clarity, Romantic gesture, and Afro-Cuban rhythms mingling amid fantastic string writing. Gitcha Groove On depicts the journey of an orchestral musician wandering between clubs after a concert, listening for a danceable beat. The piece evoked just these images in performance, from the Brahmsian opening to the Reggae-tinged fadeout ending.

Karl Jenkins’s Palladio sounded like it had been waiting for List’s strong rock backbeat for years. A pair of Beethoven arrangements from the Fifth and Sixth Symphonies included a birdcall whistle. That prop, along with toy percussion instruments, raised a question that had hung over the entire program: who exactly was the intended audience?

A late run of works by African American composers proved to be the pinnacle of the afternoon. The group brought verve to the animato movement of William Grant Still’s Afro-American Symphony, and Robinson’s Model T Magic sputtered to life with an unprecedented opportunity for musical display by List. The closer, a Robinson original titled after the composer’s hometown of Highland Park, Michigan, found the upper strings creating tense chords over ominous bass drum hits, an evocation of the hard times that have hit many post-industrial cities.

Most breathtaking of all was one of the few pieces that the ensemble played uncut: “Martin Luther King” from Duke Ellington’s Three Black Kings. The American master’s deathbed tribute to the fallen civil rights leader glows with affection and aches with loss, here captured in the gentle lilting sway of the upper strings against Robinson’s plucked basslines — a heartbeat.

Published on ClevelandClassical.com March 26, 2019.
Click here for a printable copy of this article
Return to the Front Page.